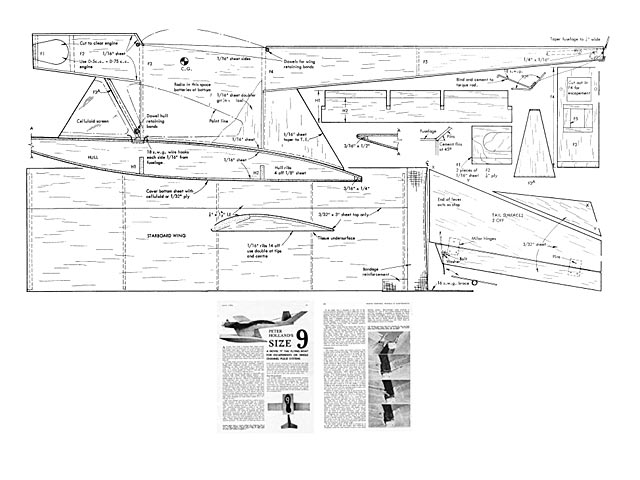 A FLYING boat with a normal hull, when scaled down to a convenient site for small motors and lightweight radio gear, suffers in terms of efficiency when it comes to lifting off cleanly and landing without taking a severe ducking. Some hulls have sponsons to prevent them healing, small sponsons are comparatively inefficient, and when added to a slim hull result in a plan form which may not be best for take-off.

A simple single sponson which forms the hull really takes this model out of the 'seaplane' category. Single float seaplanes usually have additional tip stabilisers, so they really classify as a three float craft. We want the minimum number of components in a simple model, so 'Size 9' just has one large 'boot' on which to ride the waves.

Like all the best boots, this part is removable and retained with rubber bands (elastic sided?). The reason in this case is to take landing shocks if the model comes in heavily. There is a likelihood that the windscreen then takes some of the shock, but with strong bands, the effect is vaguely similar to a sprung undercarriage and certainly saves some damage to the hull when flown over grass.

There is a false bottom to the fuselage so that the radio gear keeps dry. The whole radio bay, being in the cabin is reinforced fore and aft by tapering fairings built round corners 3 and 4. A hole is shown cut in the latter to accept Elmic Conquest escapement which is connected via usual balsa torque rod to a special 90 deg, crank designed for kick either rudder of a 'V' tail up, in turn.

The same linkage may be used for a pulse proportional actuator of the Septalette type or a geared electric motor used in simple rudder only systems. The V tail configuration can, by use of 'kick up only' control surfaces obtain a touch of up 'elevator and rudder together. This, when control is applied carefully. can assist in keeping the model fairly level in a turn. If the model is trimmed for penetration, blipping left and right quickly will produce climb ; for both control surfaces operate in the "up" part of their arc and contribute to the elevator effect. They simply blow back against stops for the neutral position..." 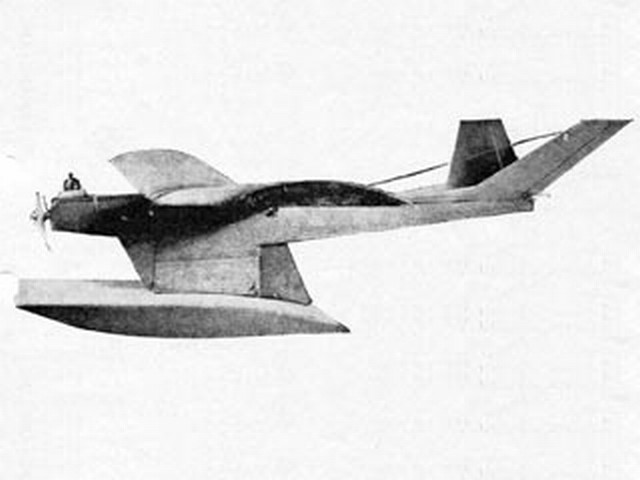 I enjoyed building this odd looking little single float sea plane, and rather like the strange but appealing looks of the finished model [more pics 003-006]. My version is electric powered (60 watts) with RET controls (ruddervators on the "V" tail") and comes in at 11.8 oz/330 grams with a 550 2S lipo. It floated very nicely and taxied and steered OK on our neighbour's swimming pool [more pics 004], but the first (hand launched) flight was "interesting", as despite having the CG in the plan position (33%), it was VERY tail heavy and also had a violent left turn and a very nasty dutch roll! In the circumstances I was pleased (and lucky) to wrestle it round half a dozen circuits and get it back on the ground undamaged. Clearly changes were needed and these were duly made: 20 grams of lead was added to the front of the float to pull the CG forward to 25%, 3 degrees right thrust was incorporated and a 5 square inch ventral fin was fitted below the "V" tail [more pics 006] to combat the dutch roll by adding some side area at the back. The changes have worked like a charm, the second and subsequent flights were entirely drama free (save for the tricky hand launch, which is achieved by gripping the back of the float and needs care). It is a pussy cat now, and whilst it won't be winning any thermal soaring contests even the glide is surprisingly decent. I'm looking forward to finding a suitable venue to try it off water; we have plenty of lakes here in the Haute Vienne but unfortunately almost all of the accessible ones are surrounded by BIG trees!
Sundancer - 14/09/2016
Ali finally managed to get some flying shots of the Size 9, a couple herewith [more pics 007, 008]. Looks like something from Star Trek in the air, but handles perfectly well now.
Sundancer - 26/09/2016
Add a comment