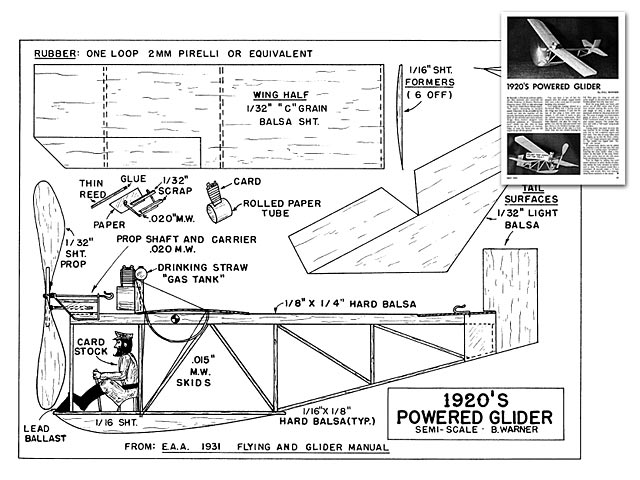 1920s Powered Glider. Rubber scale model by Bill Warner. Subject is a Northrop primary glider that was adapted in 1929 by the addition of a 3h.p. Smith Motor Wheel engine.

Quote: "Basically a Northrop primary glider, the ship modeled was converted by Orville Hickman of Modern Mechanics Magazine about 1929 to take advantage of the 3 hp Smnith Motor Wheel engine. This engine, developing its fantastic power from only 38 lbs at 2,600 rpm would not take the machine off the ground, but merely served to extend the glide of the old tried and trusty primary design. Many modern designers have produced sailplanes or 'avions-planeurs' which use this idea to keep planes up in the absence of thermal, ridge, or wave lift, some even use the engine to get off the ground.

You can have a ton of fun for peanuts with this simple, rugged model with only a few cents and an evening's building time invested!

First build the fuselage pinned to a flat board. While that is drying, cut out the wings and formers. If you wet the top of the wing a little with your tongue, it will make it easier to glue the curved formers underneath. Sand the slight angle at the wing root to get a little dihedral, and glue the wings together. Cut out the stab and rudder and glue them to the finished fuselage, making sure the front of the stab is a little Lower than the rear. (notch fuselage to fit) Then glue the wing on and add some weight to the nose and you have a finished glider! But why stop now?

Bend the prop shaft, rear hook, and carrier out of .020 music wire, If you have trouble making the carrier from one length of wire, a strip of thin aluminum drilled for the prop shaft will do. The prop is simply two balsa blades glued at about a 45° pitch angle to a 1/16 hardwood dowel or round tooth-pick center section. The model flies very well with a 'left hand' prop made by accident.

Typing paper was used to cover the rear portion of the fuselage under the stab and to roll a dummy engine and fuel tank. Two bits of scrap balsa hold the engine up so that the 2mm_ rubber motor (12" long) can pass right through it The model was rigged with fly-tying silk thread.

A motor-noise device can be added by sanding a strip of reed very thin and gluing it to a typing paper 'drum head' covering the prop carrier. Glue a tiny striker on the back of the prop. Note: the reed works best on the side away from the direction of prop rotation.

Trim for flight by adding clay until model balances at point shown on plan. Use rudder for turn, elevator to correct stall or dive. The original model flew a consistent 18 seconds under a 15 foot ceiling, and usually flew into treetops when flown outdoors in the street." 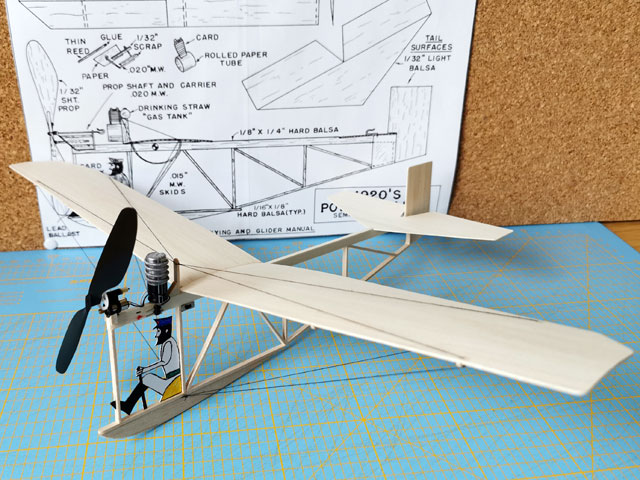