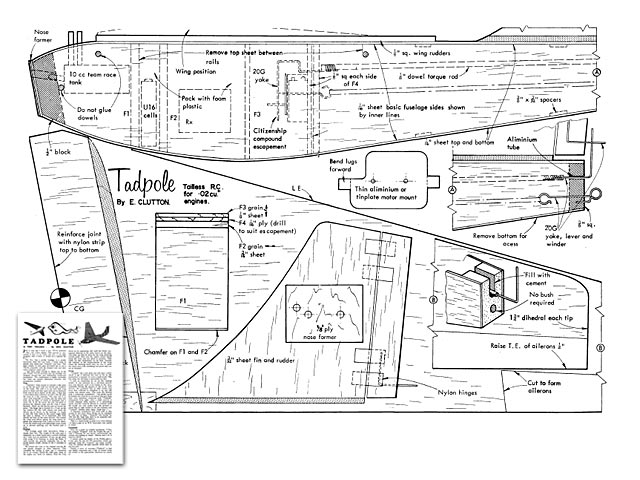 Quote: "JUST a year ago I built a tiny TD-01 powered Me. 163 rocket fighter. This proved so successful - I flew it six times and lost it on each occasion - that I knew it would be a natural for R/C!

The Me had a profile fuselage, so a purely functional sheet box was built, a swept wing of greater area added and 'Tadpole' was born. The extra weight of radio gear prompted me to use a TD-02, originally with the integral tank and later with a separate metal tank.

I had been lucky enough to obtain one of the new Futaba F4-LR receivers and the fuselage was designed around this and Citizenship compound escapement. The combination is highly successful but there are several alternative receivers and escapements available.

Wing. Tadpole's wing section is virtually a flat plate so we can get away with not having any washout on the wing. The drill is to cut each half wing panel to shape and then taper each one in thickness from root to tip as shown on the plan. I find that a razor-blade plane followed up with a flat file does the trick in a few minutes, The next job is to carve each wing-half to section and the same two tools can be used. A touch of sandpaper and a quick rub of the file across the root end grain to produce the dihedral angle and the wing is nearly finished!

Mark out the elevons and cut across the grain. The hinge line is formed by a V-cut an the top surface - fill this with cement and bend the elevons up as shown on the drawing. A couple of pins will hold them at the correct angle while the glue is setting. It is important that both elevons are bent up the same amount. Pre-cement the wing roots before gluing the wing halves together and reinforcing with a strip of nylon fabric. Cover the whole wing with lightweight tissue doped on to prevent splitting, and the hardest part is done.

Fuselage. The fuselage needs little description, being a simple sheet box. The weight of the radio gear is important on a small model and a receiver working on 3 volts is to be preferred. If you can get away with using U-16 batteries so much the better (I used normal size pencells originally, but as the model gained weight during its life I switched to U-16s). No switch was used on the original and the Rx was simply plugged in when required. This simplifies the wiring, is light, and is something less to go wrong..."

Article page is included in the planfile. 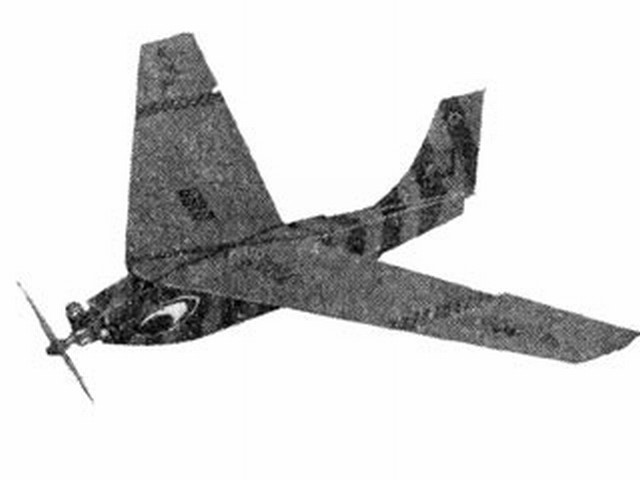 Thanks, Steve for the fantastic work you are doing in preserving these plans. The plans here state for .020 and the author used a Cox .020 Tee Dee to power it, although I don't see why one couldn't use a milder .049 like a Cox reed valve engine, put prop on backwards, or use a throttle.
ghostler - 19/11/2015
Thanks George, have fixed the text description, now.
SteveWMD - 19/11/2015
Add a comment