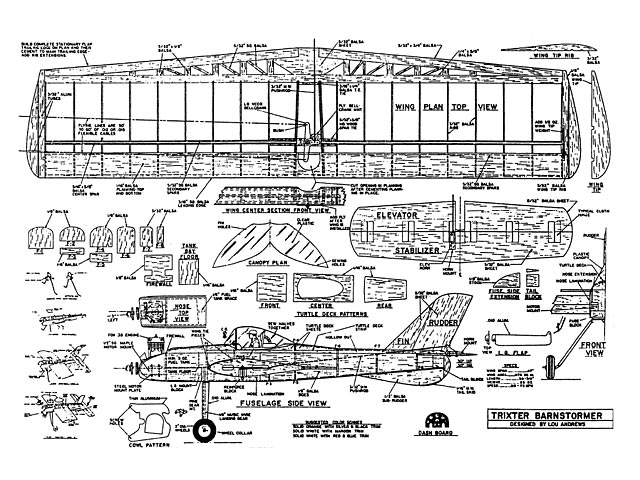 Quote: "This famous CL Stunter, designed by Lou Andrews and kitted by Paul K Gulllow in 1950 is an American classic with many contest wins to its credit. It is still an excellent flier for .25 to .35 engines. Article by Douglas A Dahlke.

ALTHOUGH OTHERS have used the same name, Barnstormer still means Andrews/Guillow and 1950 to thousands of modelers. When I was a kid of age 14 watching my first Barnstormer fly at the old Oshkosh Aeronuts field on one corner of Wittman field, it was hard for me to believe that a model which looked so realistic could do the maneuvers so well and, at the same time, fly so slowly. Surely it would fall from the sky at that speed, I thought. (Needless to say, it didn't.)

At a time when some model magazines coyly suggested that super speeds might help cover flying errors (and Hal deBolt's 'Wagons rocketed about the Stunt circle at around 100 mph), the Barnstormer puttered its way into first place at the 1950 National Contest. To prove that this was no fluke, it won again in 1951. It also chugged into hundreds of first places at local meets all over the country, convincingly demonstrating that a longer aft moment arm was capable of turning very sharply, and a realistic appearance was no hindrance.

Fox engines poured off the assembly line and filled the noses of countless Barnstormers throughout the land. The Fox .35 was the most common, but Fox .29 fans grabbed their share of wins, including places at the Nats. These two engines continue to be the engines of choice for the majority of current builders of Old-Timer Stunt models, for three good reasons:

1) they run great
2) they are easy to obtain, and
3) they are inexpensive.

The Barnstormer was an attractive kit at the initial moderate price of $4.95. The average builder could assemble the kit and stand a reasonable chance of winning with the model, much as one can with the Gieseke Nobler of today. It was the right plane at the right time - and for the right price.

The Barnstormer was the last non-flapped Stunter that was a major winner. You see, there was this youngster from Texas, George Aldrich, flying what looked like a flapped Team Racer with an antenna. An era was ending. Introduced in 1950, the Barnstormer kit was still available from America's Hobby Center in New York during 1959. Unfortunately, no production records exist.

Today, Old-Timer Stunt is growing almost as fast as the average age of modelers! As an unofficial Nats event, it outdrew all Stunt events except Open at the 1982 Nats. The 1983 Nats saw AMA President John Grigg flying a Secret Weapon with a Drone diesel. O-T is strong and growing in the Midwest and elsewhere. At Milwaukee in 1981, during a 40-mph wind, my Barn-stormer not only took first place in the PAMPA (the initials stand for Precision Aerobatic Model Pilots Assn.) Intermediate event, but it also took the high score of the entire meet - beating a Nobler in Advanced by 20 points and the Expert-class flier who sadly crashed in the wind. (Each mention of that is good for a number of grumbles, but oh how sweet it is!)

At 32 oz, my Barnstormer mocks the supposed fact that lightweight models fly poorly in the wind. In 1983 it scored two firsts, two seconds, and two thirds, as well as first in Best-Flying Glow (Stunt-a-thon '83) and first in Spirit of '52 judging (Pe-oria '83) for the most authentic 0-T model..." 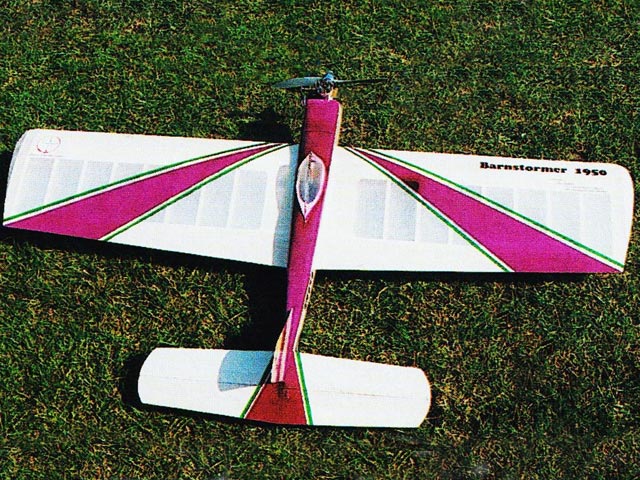