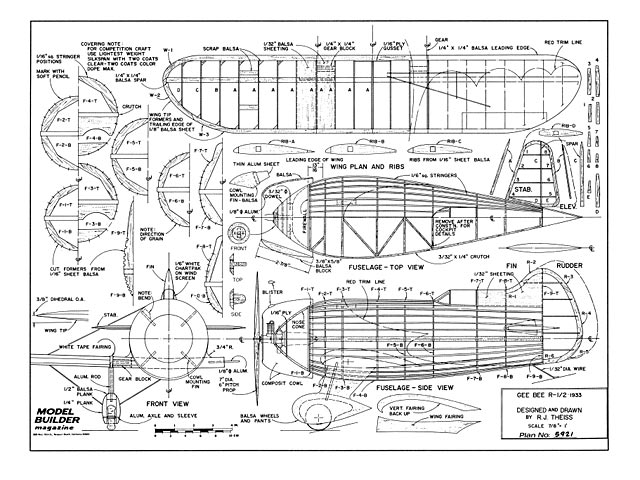 Quote: "As with most builders of miniature aircraft, I found myself wanting to knock the socks off the rest ofthe gang with a really unique project - you know, one of those strange designs that is sure to invite the comment: it ain't never gonna fly, no how!

Although the Gee Bee Super Sportster is certainly no stranger to the serious modeler, it does (due to reputation and appearance) qualify as a doubtful flier.

To top it all off, it was my intention that a CO2 motor would be doing the honors up front - yet another reason for most to have their doubts about my racer’s ability to perform.

Though you might question my innermost thoughts during the period of design and construction, I must confess to having had thoughts of nothing but success. My confidence was based on research into both the real craft and models of the blimp-like speedsters. Much to my interest were recent engineering studies that have shown the Gee Bee R-1, R-2 and R-1/ R-2 racers to have been among the most efficiently designed craft (for their large radial engines) ever built. Research has also established pilot error as the major cause of every accident related to the Super Sportsters.

Before going any farther, let me define my use of the term free flight' as applied to this model. It was my desire and intent that my racer perform just as realistically as possible. No jump take off with a spiral to an altitude from which a powerless glide of duration might be expected.

The real R-1/R-2 required power throughout its flights and it seemed reasonable to expect the same from my scaled-down job. The idea of taking off from a hard surface, flying at only inches above the pavement for about fifty yards and then landing on the same hard surface, may not be normal - but it is scale.

In contemplating the design of the model, I came to recognize three areas of major concern. First off, I was faced with a heap of frontal area. This is probably the main reason why most modelers have stayed clear of the Super Sportsters. The second major challenge was torque. When jimmy Doolittle flew the R-1 to victory at Cleveland in 1932, he had it; and with the powerful little CO2 swinging a 7 x 6 wood prop, I would have it, too. Which brings up the last and certainly not the least challenge - bulk and weight with not much wing area to support it.

By keeping the trailing edge of the balsa cowl thin, along with having a nose cone between the CO; motor and firewall, I not only relieved frontal pressures, but also induced a smoother flow of air around the fuselage than was possible with the real craft. As the drawings and photos show, unlike the huge radial engine on the real craft, my tiny single cylinder motor gives little resistance to the flow of air around the nose cone and over the leading portion of the fuselage.

I used the same flow of air to cope with my second major problem: torque. Notice that four fins are mounted to the nose cone portion of the fuselage running almost the full length of the cowl to which they are attached. I felt that it would be of an advantage to mount these units as shown rather than having two on the vertical plane and two on the horizontal. Quite possibly, the 45-degree mounting system could provide some needed lift in this area. Notice also that I added fins of thin acetate window material to the trailing edges of these mounting units. These fins are bent in a common direction, utilizing the prop wash as a resistant force to the generated torque.

The remaining problem of weight would have to be controlled by the design of my little fatty. I had determined that the maximum weight should not exceed 3-1/2 ounces. I used only the lightest balsa, including the wheels, which I turned with my Dremel tool.

As was most obvious, the tail feathers would have to increase in size. Dashed lines indicate this added area of a slip-on boot made of acetate window material. (These finally replaced the basic trim tabs added during tests.)

FUSELAGE: In preparation for construction, cut out and shape all of the formers and ribs from 1/16-inch balsa sheet. Mark the stringer positions on the edges of the formers with a soft pencil (the pencil marks will not interfere with the glue joints and never bleed through the finish as ink often does). On fuselage formers F-3-B and F-4-B, I have shown areas to be cut out so as to accommodate the installation of the wing root ribs. The material to be removed is best cut partway through and then left in place during the construction of the fuselage.

The marked positions of the stringers on formers #1, #8 and #9 should be maintained; however, the markings on the rest of the formers should serve as indicators only. A light variance from these marks may be necessary so that the stringers have a natural flow from fore to aft.

Setting these units aside, build the horizontal crutch. With the crutch pinned over the drawing and on a flat board surface, glue former F-9-T into position. Work your way forward, adding each top half former to the crutch. The first stringer to be glued in place is the very top center one, which runs from former F-6-T forward. This stringer establishes the top profile line of the fuselage.

Starting from the rearmost former F-9-T, install two stringers at a time on exact opposite sides. By cutting the stringers about five inches too long. you can provide yourself with a good leverage for their bending over the last two forwardmost formers, producing a rather abrupt curve. This is the procedure to use for the entire top half..." 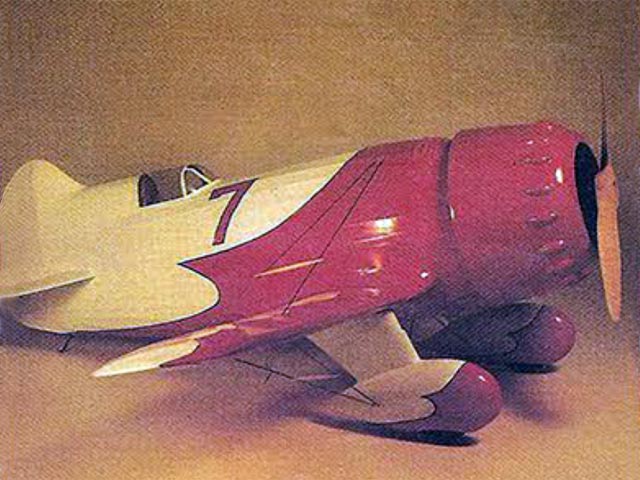