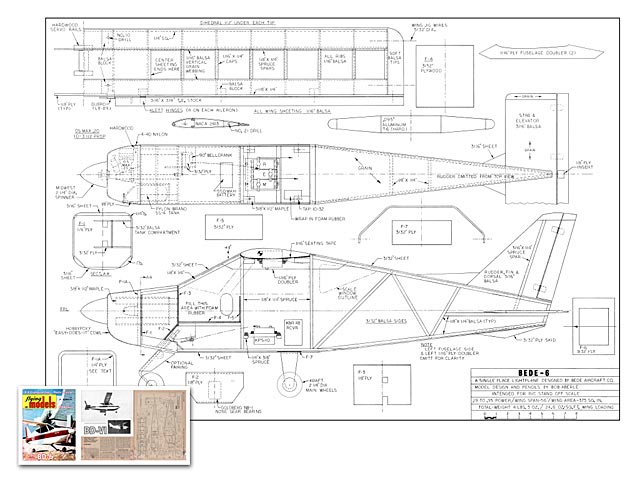 Quote: "The straight, rectangular shaped fuse-lage sides and the constant chord wing lend themselves to an easy scale project. Since the trend recently has been towards smaller RIC models it was decided to try a .20 powered version using a wing area of 375 square inches. The exact scale factor used was 2.6 inches equals 1 foot. Remember, with today's modern digital pocket calculators you can easily use any scale factor you want.

My model has a 56in wingspan and ended up weighing 4 lb 3z. This works out to a moderately heavy wing loading of 24.6 oz/sqft. The wing section chosen is almost exactly the same as that used on the full scale aircraft, which I believe to be an NACA 2413. Horizontal stabilizer area was increased by a couple of percent just to be on the safe side. With the generous nose moment arm, and the forward CG location, I'm sure you could make the stab exact scale. Vertical fin area, on my model, was slightly larger than shown on the original company three view. In a recent discussion with Mr. Frank Andrews of Bede Aircraft I learned that the vertical tail on the prototype had been increased somewhat. When I received a revised three view from Bede's Chief Designer, Mr. Paul Griffin. I was surprised to find it very close to the size and shape I had already chosen on my model.

I must admit also that I reduced the fuselage length by approx 1/2in so that standard 36in balsa could be used. Yes, economy does have to enter into the design at times. The spinner chosen (2-1/4" dia.) was considerably smaller than scale. In fact the closest size to scale would have been a Fox Slim Jim 2-3/4in dia. I just, felt that a spinner that big would have loaded down the little OS Max .20 too much..."

Quote: "Here is Bob Aberle's Bede BD-6 from Flying Models magazine issue 09-75. This model was featured on the cover of this issue and is included." 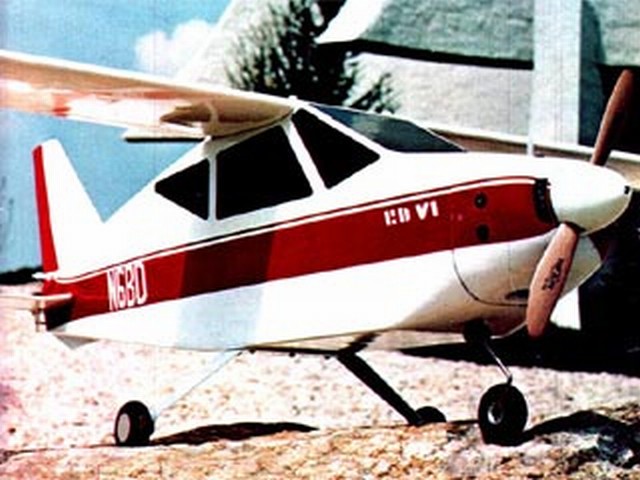