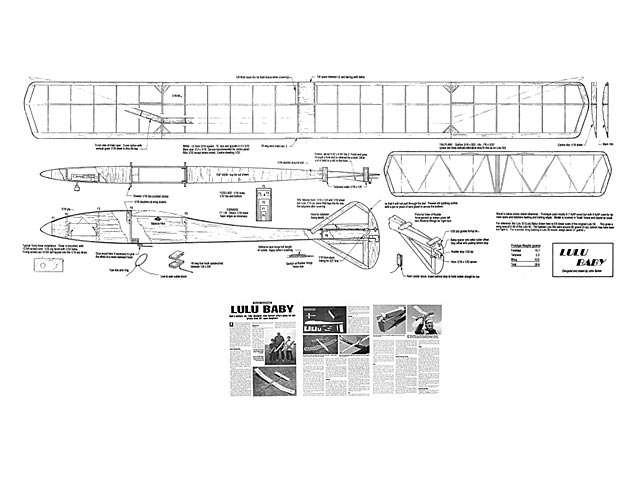 Quote: "Half a century on, 'Lulu' designer John Barker offers plans for her pretty little 30 in span daughter! Lulu Baby.

Fifty may be a bit old to be having a baby but it seems to be the thing nowadays. In case you are wondering about the exact dates, Lulu (oz1082) was actually born in 1947 although she only made her debut in the Aeromodeller in 1949. I am aware that there are a few Lulu babies around, born out of wedlock as it were, and none the worse for that, but I don't think that the plans have been published. So if you want an easy build with no necessity to put a bar sinister on your SAM badge, this is the one for you.

When I had finished the plans and the prototype I wanted someone else to build a 'Baby' before I offered her for publication. I knew John Trotter and his sons Saul and Joel by reputation as keen model flyers but I did not know them personally. I hesitantly approached John but he was most helpful and said they would build not one but two models and let me have their comments and some photographs. Their contribution is much appreciated. How conscientiously they carried out their Test Pilots role is evident from the photographs.

Design Considerations. The suggestion to produce a small version came from my friend Peter Spalding who runs the 'Lulu' Postal Competition. In his contacts with competitors there were several who suggested that a smaller version would be welcomed. My experience is that small gliders do not fly very well and I cannot abide aeroplanes that don't fly properly. For this reason I rejected the normal first impulse when scaling down, which is to make the linear dimensions half size.This would have given a span of 25 inches. One can produce an efficient glider at this size by suitable aerodynamic and structural design (as evidenced by chuck gliders) but when scaling down structures and wing sections from something larger, I thought that 25 inches would be too small so I settled for a span of 30 inches.

Although I was aiming for an aeroplane that would fly, I think that at this size people are looking for fun as much as competition success.To this end I made the centre section spar of spruce which means that the 'Baby' can be thrown like an HLG, catapulted, and handled in a wind without too much fear of breaking the wing. If you can't be bothered to cut the spruce or if your model shop does not stock it then some good balsa will stand all but the most extreme loads. As this is a vintage style model I wanted to avoid too much plumbing on the outside but I did not succeed very well! The auto rudder is not too bad. I went for a style we used back in the 'fifties which uses a block to hold the rudder straight during the tow; the block is attached to the tow line so that when the tow line drops away the block is pulled out and the rudder is pulled over by a rubber strand to the glide position.

I attempted to make the dethermaliser unob-trusive by using a dropping nose weight activated by a fuse. The panel, forming the bottom of the weight box, was made detachable and the nose weight and a vertical snuffer tube were fixed to it. I had forgotten what a nuisance fuses were. I came
home after the first day's flying, got out the balsa knife, and fitted a Tomy timer and tip-up tail D/T!

Construction. Templates. It is best to start building when you have just finished a box of breakfast cereal! Not because of the extra energy available but because you can cut some useful templates and jigs from the empty carton. You will all have your own ideas on what is needed but the ones I used are shown in the photograph.

I make a template to the shape of the fuselage sides. This may seem unnecessary in that the shape could be marked directly on to the balsa but it does not take much time and, if you do make a mistake, it is quick and simple to build and easy to fly. What more could you want!
cheaper to scrap cardboard than balsa. The broad 'U' shaped jigs are for holding the sides square and together whilst the formers are fitted. The piece about 2-1/2 in wide with the ends bent back is for supporting the centre section whilst the tips are built on..."

Quote: "Next, to one of another full size free plan and it's Lulu Baby by John Barker 50 years after he designed the original Lulu in 1947. Lulu Baby comes in at 30in wingspan and lightweight button thread is recommended to get this very attractive little tow line glider up into the thermals. It features easy construction and is equipped with 1950s style auto rudder and a D/T." 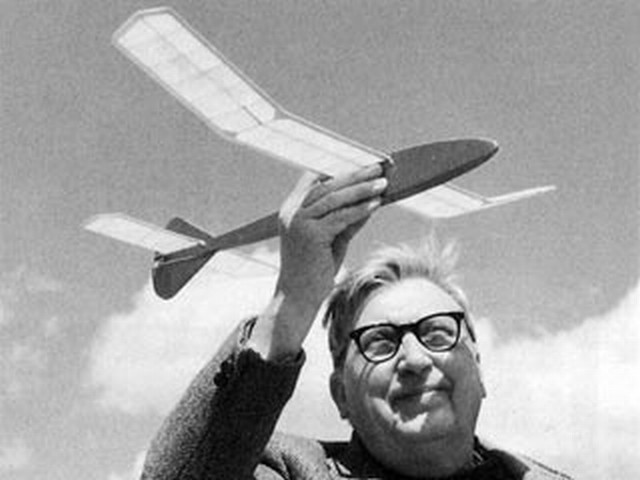 Jon emailed in to point out an error on this plan: Quote: - "Just thought I'd let you know about a small scanning error in the Lulu Baby glider plan on Outerzone. I was printing this up and realised that the right hand wing tip panel, second bay is too small by 1/8". It seems to be a join running up the page. I appreciate that it's a small error and there's not much you can do but a note on the listing might be helpful? Thanks again for a great resource, Cheers!" - thanks Jon. Basically, it is beyond my skill to remove all of the scanning errors on this plan and get it straightened out. If someone smarter than me can create a clean plan from this scan, please do email it in. Thanks.
SteveWMD - 11/01/2013
Fixed now. Kind of - always still best to check. Note the previous copy had the following issues: Unequally spaced wing ribs, one wing longer than the other, also one side of the horiz stab longer than the other. Distance from centreline to poly break different on both wings, too. Check these details carefully on *any* version of this plan you may find, before starting to cut any balsa.
SteveWMD - 26/01/2016
Add a comment