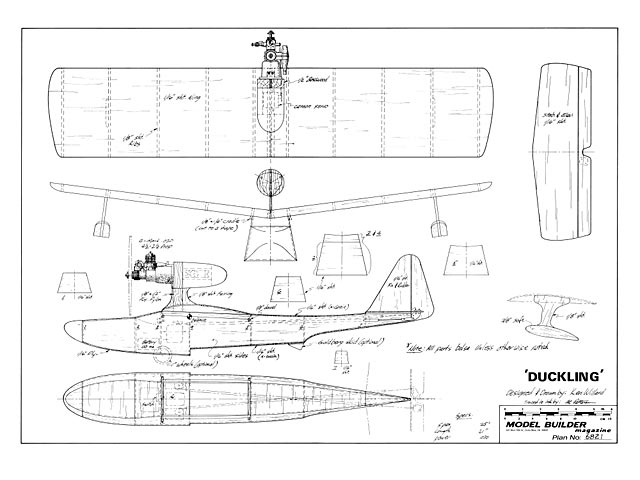 Quote: "Here is Ken Willard's Duckling from Model Builder magazine issue 06-82. I have included the cover which featured Ken Willard coaching Belinda Northrop on how best to pose while holding the Duckling."

Quote: "Duckling, by Ken Willard. Taking advantage of the throttlable G-Mark .030 R/C engine, our designer has come up with a cute little water bird that's small enough to take along in your fishing tackle box, just in case they ain't biting!

In the past, the design and development of small radio controlled models has been hampered by the lack of a small engine which could be reliably throttled down so the model could be taxied out for takeoff, then once airborne run at a cruising speed rather than zipping around all the time at full power. Some throttles have been made for .049 engines, most notably the Hiscott, but for the even smaller engines, like the .020 and .010 Cox, no throttles exist other than homemade. In my opinion, that is one reason why the Tee-Dee .020 and .010 engines were discontinued: today's radio modeler wants the flexibility of power from idle to full throttle.

The Duckling was specifically designed to use the G-Mark .030 engine. To make the design even more versatile, a quickly removable landing gear can be installed so the model is amphibious and can be operated off a runway as well as a pond. The only thing that I did, when flying off water, was to remove the rear half of the muffler on the .030 to make it easier to prime, and also easier to clear out any water which got into the engine when the Duckling decided to dunk. And it does, occasionally, but usually without damage; a quick dryout in the sun and you're ready to fly again.

The all balsa sheet construction, when waterproofed with an overlapped Super Monokote covering on the outside, and clear dope on any exposed wood, makes it shed water like off a duck's back.

Of course, the size of the Duckling requires that you use small radio equip-ment. The plans show the Cannon Super Micro unit, but by some rearrangement of the receiver, servos, and battery pack, other small units can be installed. They may be a bit heavier, but the .030 has plenty of excess power for this size model. One minor problem is that the model is so small that a full length antenna trails too far aft. Solution: shorten the antenna, but get someone with the right equipment to retune your receiver to your transmitter with the short antenna installed. Another solution: run the antenna back to the top of the fin, then over to one wing tip, and let it trail from there a few inches. In any event, the model's size means it can't go too far out or you'll lose sight of it.

The construction technique is, to say the least, ultra simple. The sheet balsa structure, with some small amount of block balsa carving on the engine pod and the tip floats, can be Hot Stuffed together in a couple of evening's work. As you can see from the photo of the cut out parts (a few are not shown) there are only about 35 pieces in the whole model. So let's put them together.

WING: Build the wing out of one piece of 1/16 sheet balsa, 25 by 5 in size. Cut out the 12 ribs to the shape shown on the side view of the hull, place them in position on the plans, with a sheet of wax paper on the plans to keep the ribs from sticking to them. Place the sheet of balsa over the ribs, and hold it in place while Hot Stuffing the ribs to the sheet by piercing the wood with a pin at 1/2 inch spacing along each rib. Be sure the sheet of wood is flat on the table top (which also must be flat) at the leading and trailing edges. Then, when you lift the wing off the table, it is all formed except for the dihedral.

Slice the wing in half between the two center ribs, Hot Stuff a piece of 1/2 inch trailing edge stock between them, and viola, instant dihedral! Wing structure done.

ENGINE PYLON: This is probably the trickiest part of the construction. Cut out the length of 1/2 by 1/8 inch plywood and insert it in a 1/2 by 1/8 inch hole cut out in the center of the wing so the bottom of the ply-wood pylon is flush with the bottom of the center ribs. Next, cut out the 1/2 inch thick pieces of basswood which serve as the mounting surface for the backplate of the engine..." 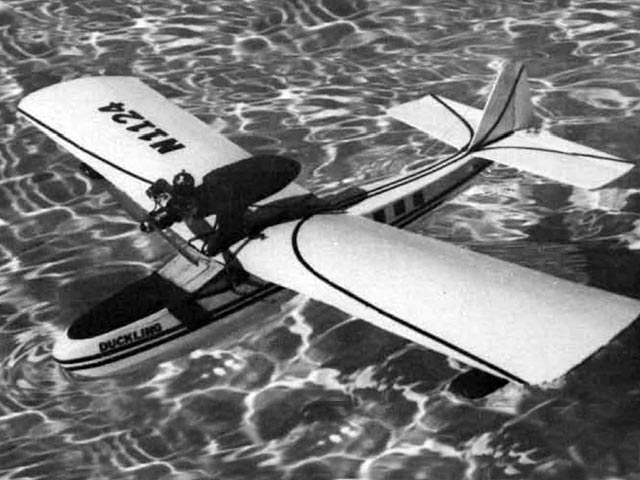