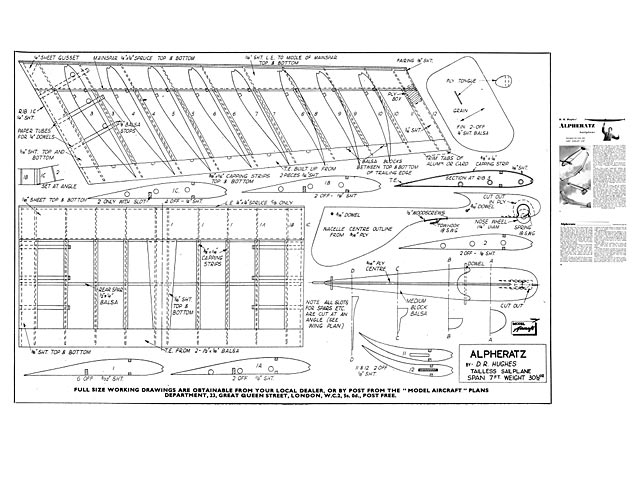 Alpheratz. 84in span tailess FF sailplane. From Model Aircraft, May 1950.

THIS model is the third in a series of tailless models, and it appears to have the optimum performance for this particular layout. First flights were made, hand-launched at Clwyd Hills in a strong breeze, when it clocked 72 sec. Its winning aggregate in the 1949 Lady Shelley Cup was 5 min 41 sec. The first flight (2 min 7 sec.) was only its third tow-launched flight. This speaks well for the model's towline stability, and the designer's decision to use a central underfin has been well rewarded - previous models having a fin atop the centre-section and being unwieldy on the line.

Now Alpheratz is as stable both on and off the tow-line as anyone could wish and has a performance equal to many orthodox sailplanes of similar size.

Nacelle. This is built 'sandwich' fashion, the centre being an outline of 3/16 in ply. To each side of this is cemented block balsa which is afterwards carved and sanded to the sections indicated. The use of an underfin necessitates a nose-wheel. This is a 1-1/4 in diameter solid rubber tyre on a wooden hub with an 18-gauge bush. Make the sprung axle from 18-gauge wire, leaving long ends for pressing into the balsa as indicated on the plan. Drill through for the wing-fixing dowels and cement these in place. Make a tow-hook from 18-gauge wire and screw this in place, as shown.

Centre-section. Pin the lower spar in position, rear spar and lower part of trailing edge (which is built up from a 'vee' of 1/16 in sheet). Now add the ribs, leading edge and top spar. Remove from board and fit dowel tubes..." 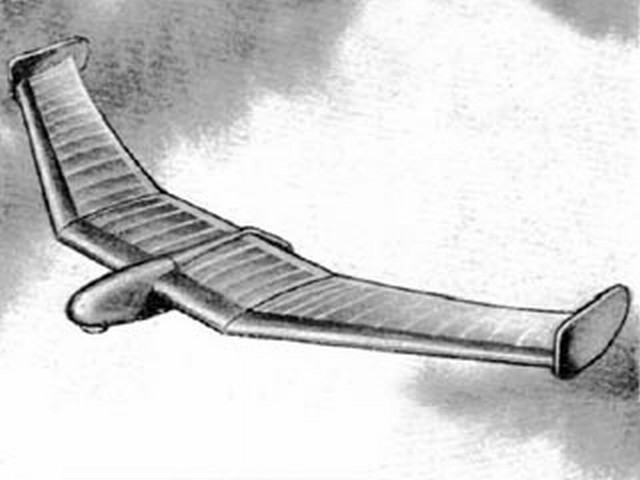