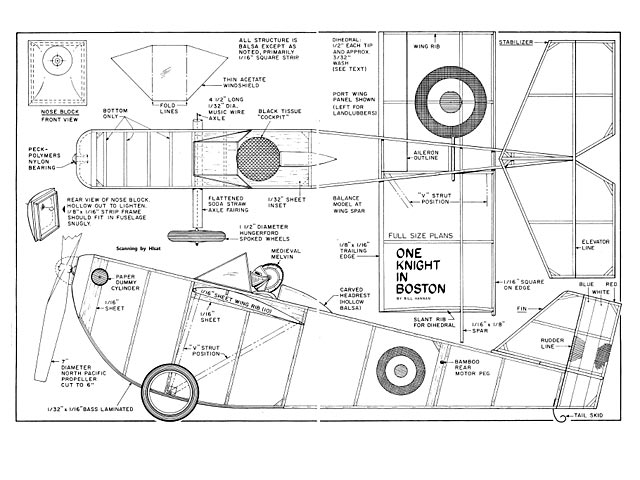 One Knight in Boston. 16in rubber model, to Bostonian West rules.

Quote: "What is it? Loening, Nieuport or Penguin - none of the above! Here is MAN's first Bostonian and it looks like a lot of fun. One Knight in Boston, by Bill Hannan.

What's in a name? 'One Knight in Boston' owes its appellation to its medieval helmeted pilot. One of the sideline attractions of the Bostonian class has been the possibilities for incorporating some humor in the model names, which has perhaps inspired greater competition than the actual flying!

The event originated on the East Coast, promoted by Ed Whitten in his Star Skippers newsletter. When Walt Mooney, of California, heard about the category he thought it a fine concept, but too oriented to expert indoor model builders. Under the East Coast rules a weight minimum of 7 grams (less rubber motor) had been established. Walt doubled this to 14 grams, bringing the weight target within reach of young Juniors as well as fumble-fingered oldsters. The resulting sturdy models are also suited to outdoor flying.

The turnout at a recent evening contest held in San Diego may be indicative of the Bostonian West attraction: 32 models appeared, including some from the Los Angeles area, about 125 miles distant.

The fuselage must accommodate a theoretical 'box' measuring 3 x 2-1/2 x 1-1/2 inches. Fuselage must support the motor(s) and form or exceed the box requirement. No motor sticks allowed. Fuselage must have a forward windshield and a window on each side, each of which must equal or exceed 1 in square area. Open cockpit or parasol types waive the side window rule if side vision area meets requirements, but windshield must meet area requirement rule.

Landing gear must be practical, fixed, with two or more wheels of at least 3/4 in diameter. All flights are ROG. Maximum propeller diameter is 6 inches. Covering must be condenser paper or heavier tissue. (East Coast rules now specify surfaces covered on both sides, but present West Coast rules allow single-surface covering.) A 'charisma factor' is employed in the East to encourage realism, originality and fine workmanship, but so far only a separate 'beauty award' has been employed in California.

Individual clubs have been altering rules slightly to suit themselves. While this may have the disadvantage of not permitting standardization or direct comparison of model performances in various parts of the country, it allows for flexibility (and increased participation) on local levels.

San Diego Scale Staffel club contests often feature a special rule for a particular contest. For example, to be eligible to participate in the 4th of July event, each model had to display tiny American flag stickers. For a more recent contest, national markings were specified. First off the mark under these regulations was Bill Noonan, who came up with a flying caricature based upon a WW I German, Taube. Bill elected to enclose the theoretical fuselage box horizontally. Since it seemed only logical to build an allied opponent for the Taube, our little 'One Knight' in French markings was conceived. To add a distinctive note, the theoretical fuselage box was arranged vertically, accounting for its deep belly.

Designed in one hour flat, and built in a very few evenings, it is sort of a 3-dimensional visual pun. Efficiency? Nope. Winning motives? Nope. Quite obviously aerodynamic considerations were outside the immediate considerations. And, true to its design goals, it has won no contests. However, it has garnered plenty of lucid comments and started more than a few conversations! Flightmaster Bill Warner offered the opinion that the fuselage was really an inverted airfoil, and was probably opposing the lift generated by the wings.

Earl Van Gorder had this reaction: I like it. That may not be considered exactly complimentary, however, as I'm known to have a fondness for ugly aircraft!

The dean of American aeromodelers, Frank Zaic, put his views this way: Can't imagine all that cross-section plowing through the air - but there seems to be room enough for a bit of hydrogen.

Perhaps Mr VTO, Dave Linstrum, paid 'One Knight' the ultimate compliment with: It's one of a kind. Lots of drag is ok! It has super charisma!

A surprising number of people assumed it to be some sort of scale model, and, guesses included the Loening Kitten, Nieuport-Macchi and Penguin practice trainers. And who knows, perhaps our model may be an unconscious amalgam of them all.

If you are interested in ultimate performance, this project is not for you. But if you are not adverse to attracting some attention, standing apart from the crowd and generating a few smiles, 'One Knight' may be your answer.

CONSTRUCTION. A photocopy of the plans will allow you to preserve your Model Airplane News. Note that only one wing panel is shown on the drawing, but a few moments' thought should show you that the same drawing can be used for the opposite panel. Simply project the leading edge and spar stubs out the opposite direction and tilt the end rib for dihedral.

The original model was constructed from readily available wood - with no special effort to obtain 'choice' stock - but it did end up about 1 gram overweight.

Cover the plans with transparent kitchen wrap to protect them. A piece of cellotex insulation board was employed for its ability to accept straight pins easily, since most of the parts are pinned in place during construction.

Fuselage: Construct a fuselage side directly over the grained portion of the side-view drawing. The curved lower longeron is made from strips of 1/16 x 1/32 basswood laminated together with water-thinned white glue. A cardboard form can be used for achieving a smooth curve, but we simply used closely-spaced straight pins. When the first side is dry, the pins may be removed, a second sheet of clear kitchen wrap applied, and the second side assembled directly atop the first, to help assure uniformity. When dry, remove fuselage sides from the building board; bevel the inner rear members to a slight angle where they will join, and assemble them over the top-view drawing.

Install the crosspieces, working from the rear forward, and checking for squareness with a small triangle or cardboard rectangle. The fuselage sides should be carefully cut and cracked at the points where they become parallel, and reglued. Add remaining crossmembers, noting that there are extra ones across the bottom of the curved area. Cut the sheet balsa cockpit area inset to size and install..."

Colour photo of completed model shown here is from build thread by maciej at http://awiatikforum.ok1.pl/viewtopic.php?p=2657#2657 with lots more great pics. 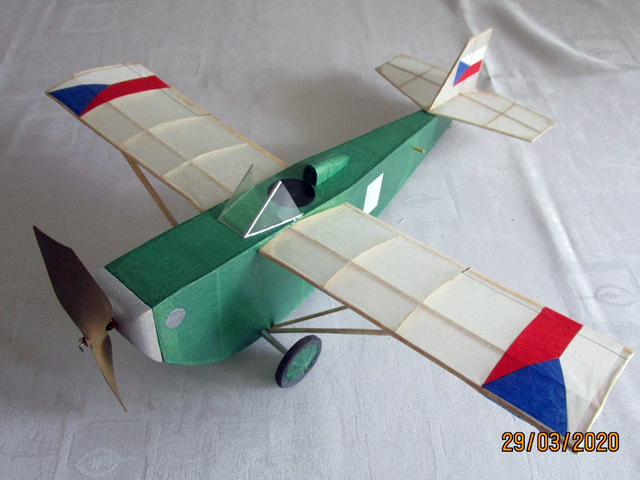 I've just finished building a version of the 'One Knight in Boston' [more pics 003] for the Second Balsa Builders Conversion Contest on RCGroups. I scaled the plane by 188% to give me a 30-inch wingspan, doubled the wood sizes from the plan, added an electric motor and 3-channel RC. The construction and flying notes are documented in an RCGroups thread http://www.rcgroups.com/forums/showthread.php?t=1843039
DavidTerrell - 13/05/2013
Here's a photo of my Bostonian Knight - built from Outerzone plans as a lightweight indoor model with pre-shrunk tissue on top surfaces only [pic 007]. An interesting model perhaps, but I couldn't get it to fly right...
ChrisMoes - 03/11/2020
Next model is by Mr. Hannan One Knight in Boston [main pic]. Very good flyer. The photo in the air [pic 008] is from our meeting for small scale models in Rakovník, held last year. Many thanks Mr. Hannan.
Drahoslav Dvorak - 24/02/2021
Add a comment