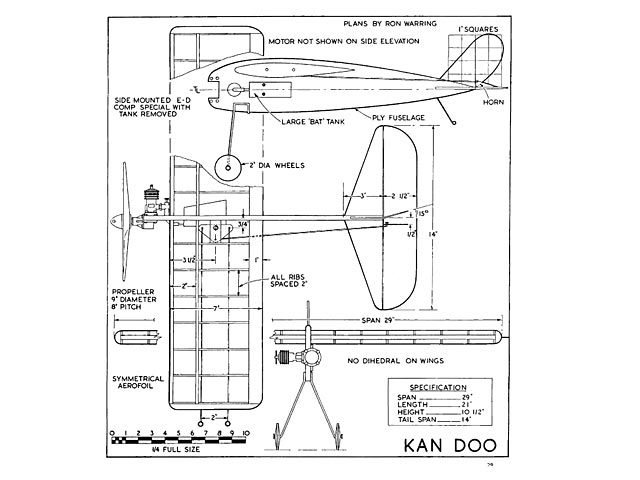 Note the Kan-Doo was kitted by Kandoo Products.

Quote: "MY introduction to control line flying was early in 1947, when I converted a 60in span free flight cabin model. This was soon followed by a couple of Phantom kits, after which I decided to take up stunt flying. Wondering how to make my models really stuntable, I remembered that many full size World War I aircraft were renowned for their fine handling qualities and manoeuvrability. As a result of this reasoning, I chose the Sopwith Triplane as my first stunt model. The first attempt at a take-off resulted in a ground loop, but I managed to get it off safely on the second try. I found it difficult to obtain anything like level flight, but a 35 minute fuel run gave me plenty of time to get accustomed to the sensitive control.

Dozens of practice flights followed and it seemed that if any model was going to loop, this was the one. So one day I plucked up courage, gave full UP and kept it there. This resulted in the first control line loop we had seen or heard of in the Southampton area. After one successful loop, level flight and wingovers seemed very tame, so I practised loops galore.

The next logical step was inverted flight, but the first attempt resulted in curtains for the Tripe. When I got the model on to its back - via a half loop upwards - I found that there was insufficient down elevator movement to maintain level flight. With full DOWN the model went into a shallow dive, gaining speed all the time. After it hit the deck the pieces were strewn all round the flight circle.

By this time the reader is probably wondering what all this has to do with the Kan-Doo, the model that won the Gold Trophy at the 1948 British Nationals. Well, although external appearances are in no way similar, the proportions and loading of the two models are identical. Simplicity was the main requirement of Kan-Doo, as by this time I could see that learning to stunt successfully was going to mean several write-offs. Hence the profile fuselage, constant chord wing and generally rugged construction. The fact that I do most of my control line flying over concrete helps to explain the eleven Kan-Doo's that I built and pranged - up to the time of the Nationals.

The actual winning model has lasted until quite recently. This was built from fairly soft wood and was slightly lighter than the earlier models - being just 15-1/2 ounces, without fuel or prop. Only one test flight was made prior to the contest and owing to the high winds this ended in a crash. A broken engine mount was hurriedly repaired by bolting an extra piece of plywood to the nose.

The Sopwith Tripe and all the Kan-Doo's were powered with the same E.D. Comp Special, which has now completed nearly 800 hours' running without replacements - except for the spinner nut which was battered out of all recognition by frequent contact with my home concrete flying ground. I have found that all E.D. engines give their best performance after several months of running. In fact, the more I use mine, the better it seems to get.

I have noticed that when stunt model designs are published in the American magazines, rarely do they include a complete list of the stunts of which the model is capable. The standard 16 ounce Kan-Doo is capable of the following manoeuvres:

At this stage let me confess that I am one of those modellers who suffer from contest nerves. Consequently, I sometimes start off with the model almost out of control and only net 100 of the 800-900 points for which I have practised.

Even ultra light Kan-Doo's will take plenty of punishment - for instance, wing overs straight into the ground rarely damage more than a prop. In any case, the construction makes for easy repairs. Weight is the main thing to watch with this design - keep it down to 11-14 ounces for best results.

The accompanying drawing gives only general proportions of the model. For those who wish to build the Kan-Doo, complete kits are manufactured by Kandoo Products, 89, Spon End, Coventry. A recent advert claimed that a profile stunt model now on the market is similar to the Gold Trophy winner. I should like to make it quite clear that this model has no connection with my own design and that it only bears a superficial external slmilarity."

Quote "Here is a fullsize pdf of the model that won the 1948 gold trophy. There is much more information on Dave Day’s site at this address http://www.iroquois.free-online.co.uk/kandoo2.htm"

Note 02/11/2020: It seems the above domain is now defunct. Currently the Dave Day pages covereing the Kan Doo design are available at http://miniatureaeronautics.com/Dave_Day/kandoo.htm 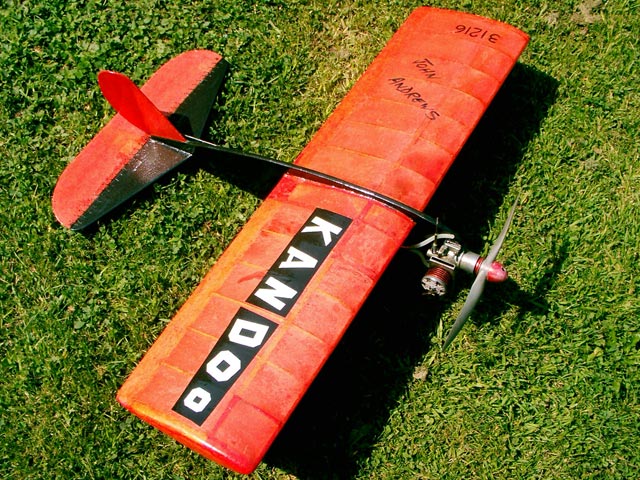 Hi, Attached are two pictures of a KAN-DOO that I built some time ago [main pic, 004]. Hope they may be of some use.
John Andrews - 18/04/2020
Many thanks to JohnLaycock, who emailed in to say this plan drawing has some discrepancies. The plan view and side view do not match (at all). If the plan view is correct, then the fuselage side view is 2 in too long, also it shows a much wider-chord wing.
SteveWMD - 30/10/2020
Add a comment