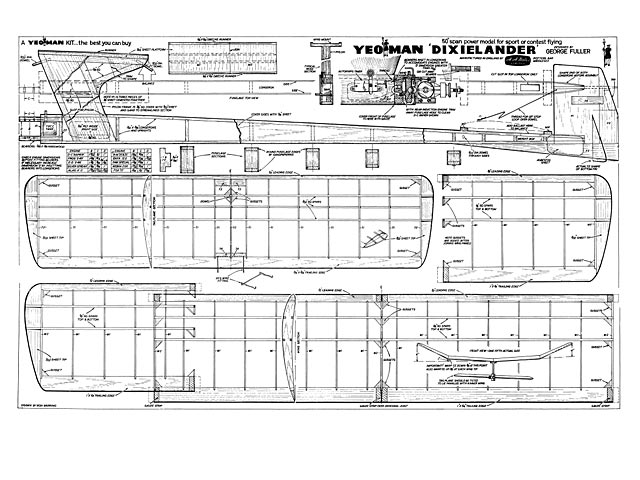 Quote: "George Fuller’s legendary Dixielander. 50in span FF power. This plan is from the Yeoman Kit circa 1960. Consensus is that the wash-in/wash-out should be 3/16in not 3/8in as on plan; but I have built Dixies using both these figures and it never seemed to make much difference." 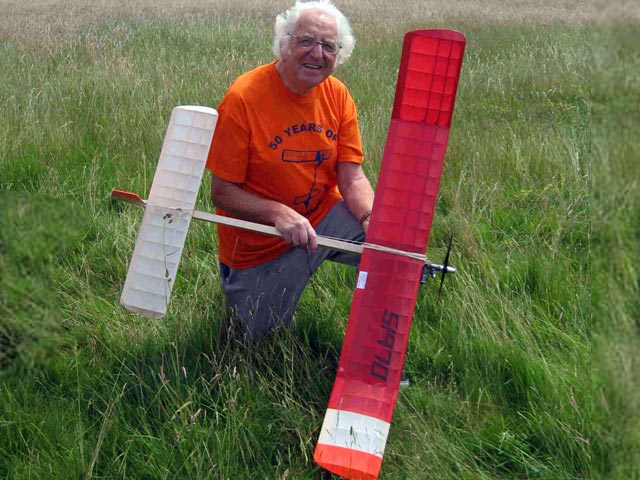 Main model photo is from http://www.sam1066.org/dixielander_2009.html and shows the designer George Fuller in 2009 for Dixielander 50th year celebration.
SteveWMD - 27/10/2012
Hi, I was very pleased to see this plan and remember its successful introduction very clearly. Just an observation regarding the size of the fuselage longerons which are marked 3/4” x 3/16”. Surely it should read 3/16” x 3/16”. Many thanks again for your dedication and energy for producing such a well followed site.
daveo91 - 04/11/2012
My first sighting of this model from George Fuller in flight was about 1963 and it flew like it was on rails. I never got to build one yet built a 'Slip Stream' which looked about the same Lay out. If I can say this about the Fuselage longeron size that Dave commented on is that it is full width 3/4” x 3/16” top and bottom (plus sides) as shown in the cross section views directly below the side view location of the formers which are also 3/4” wide, the plan view also confirms this. I feel sure Daveo91 would have picked up on this after posting. Thanks for the many hours sifting through all these wonderful plans and articles Steve. Regards,
GaryB - 28/10/2013
The kitting of George Fuller's Dixielander by Yeoman put the potential to have a genuine contest winning contender in Open Power in the hands of anyone who could build the deceptively simple structure accurately. We had multiple "Dixies" powered at first by AM25 and 35 diesels and then by the wonderful Cox TD15 and Special 15. It was a good performer with the AM35, built exactly as per plan, but with the lighter and more powerful Cox motors you needed to reduce the right wing wash-in and tip washout from 3/8" to around 1/4" to allow for the higher speed. Built like this it wasn't just good with the Cox, but VERY good indeed, with a dead air potential of well over four minutes from a ten second power run. Once adjusted, with all the motors, one of its great virtues was the absolute reliability of the flight pattern, our models could be taken out of the box, assembled and flown immediately in a contest with no worries. Structurally the wing, with its four 1/8" square spars, needed care to ensure all joints were accurately made and all the gussets properly fitted, but once covered and "aged" it was a very stable structure. The fuselage could hardly have been simpler. The black and white photo [more pics 003] shows my late brother-in-law and flying buddy Eric with his favourite, immaculately built, AM35 powered Dixie which served him well in many contests. One of the great, all-time, classic designs.
Sundancer - 29/03/2016
Even with a Silver Swallow 2.5cc diesel this is still a quite potent design. So I built two! [more pics 004, 005]
DannyMZ - 09/03/2018
Here is an action shot of the model built from the DIXIELANDER plan, oz3603 [more pics 006].
Scott_NZ - 12/07/2019
Add a comment