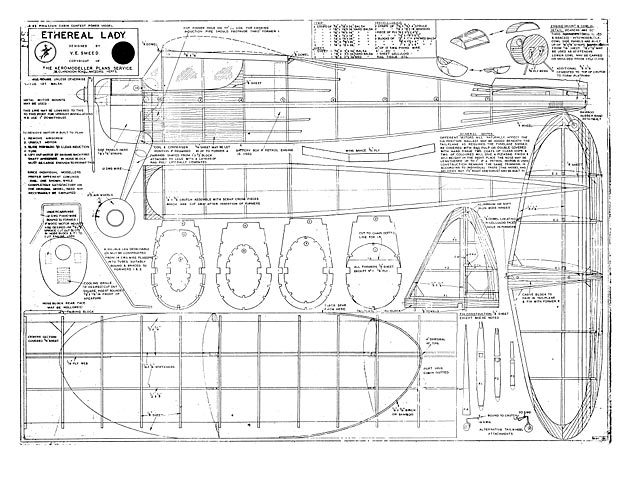 Quote: "Ethereal Lady is one of those amiable little aeroplanes that will put up with minor modifications, over-loading, glider-towing and all the maltreatment inflicted on models by ingenious aeromodellers, and will still retain its viceless characteristics and delightful flying qualities. As a first power model, with the smaller engines, it is ideal, although not of the slab-sided construction normally recommended for first attempts. With larger engines it is a challenge to the pylons and freak models in its performance, and yet retains complete simplicity in trimming.

The maiden flight of the prototype was straight off the drawing board - - 5 min 40 sec on a 40 sec motor run, in non-thermal conditions. This model was powered with an Ohlsson 23, and a careful compilation of performances over a period of weeks gave an average rate of climb of 1,700 ft per minute for this machine. A Mills-powered version climbed consistently at 800-900 f.p.m. So far five models have been built to this design - one with a Mills, two with E.D.'s, and two with Ohlsson 23's, one of which (the designer's) was converted to take a 2 cc Movo. Each of .these models was built by a different builder, and none so far has cost more than 9/- excluding motor and wheels, although built so far apart as South Africa, Germany, Yorkshire and Kent.

One trouble with the diesel motor applied to semi-scale and scale models is the difficulty of positioning the CG correctly with so much motor weight forward. Ballast seems a wasteful means of correctly relating the forces, and to provide a pleasing cabin and ready access to the motor without cranking the wings is a bit of a problem. Since however a semi-scale job is built for looks as well as performance, this weight set-up does offer scope for a careful colour-dope finish. This is the case with the diesel-powered version of the 'Lady' - the nose has been shortened as far as is practicable, and the fuselage is finished with two coats of clear dope, two of colour, and one of banana oil.

To anyone wishing to modify the design, it should be pointed put that, while an ample margin of longitudinal stability is inherent in the model, any increase in weight in the nose will mean ballasting and an increased pitching moment, with the consequent recovery-lag in a stall, etc.

The construction throughout is perfectly straightforward, but the following points may help. Some eyebrows may be raised at some of the materials used - for instance 1/8in sheet wing ribs - but if the wood used is graded correctly, a sturdy and reasonably warp-proof yet surprisingly light structure will result. The prototype weighed 23 oz with the Ohlsson 23, ignition equipment, and heavy-duty batteries..." 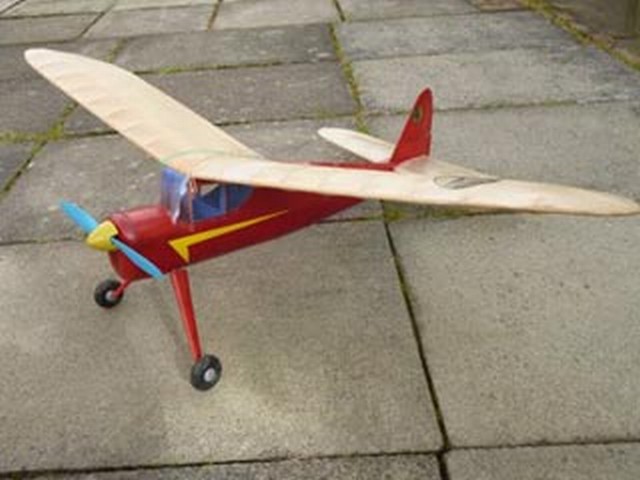