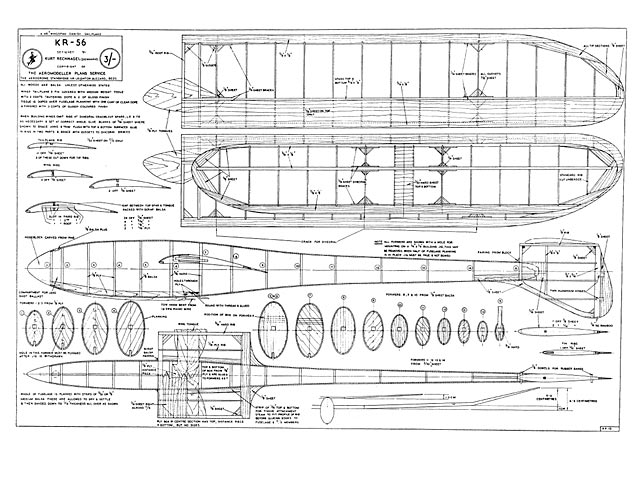 KR-56. 68in FF Glider by Kurt Rechnagel of Denmark from Aeromodeller Annual 1949.

We have become so used to the typical Nordic model, all wings and very little more than a stick fuselage, that to find something capable of winning a concours d'elegance as well as putting up excellent flights, is all the more welcome. Kurt Rech-nagel's KR.56 does just this and is the culmination of three years' modelling endeavour when it won the KLM Concours Cup for him at the Danish Summer Camp this year. Rules of this cup presented in 1941 by KLM, are that no entrant may present the same model in successive years. Rechnagel has now won it outright with his third consecutive win. In 1947, he built a really large model, pictured in the Aeromodeller, but in both 1948 and 1949, concentrated on medium sized and more elegant machines.

Leading edge on wings and tailplane and the whole of the fuselage was planked in the original with obechi, but this has been replaced by balsa in our plan. The high quality of the planking and finish did much to help him win the cup.

As the illustrations show, the model does indeed look good, and is of a style to appeal to British tastes, being neat in line and easily transportable.

Danish building style seems to be drifting away from the Swedish school and becoming more closely allied to Dutch and British thought as comparison with the other Danish model listed in the Annual, the JAL 52 by Jens Arne Lauridsen, will serve to confirm." 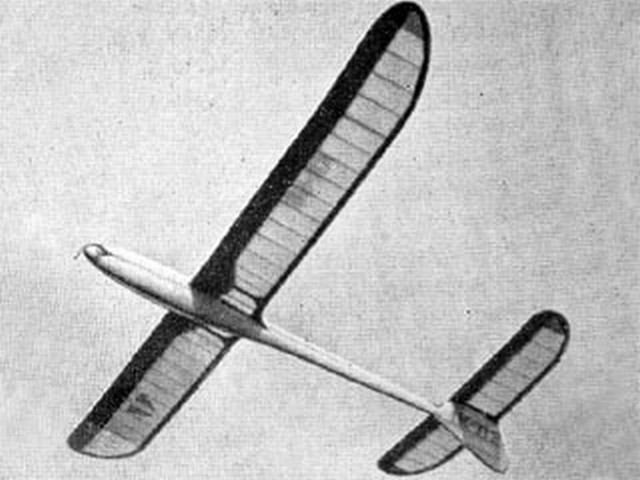