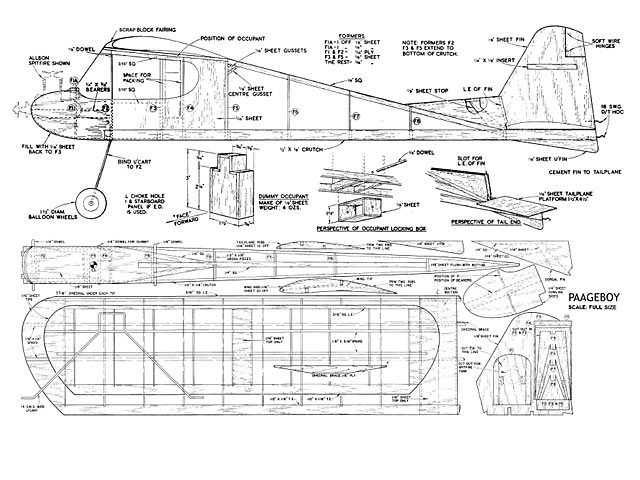 Quote: "THE idea underlying Pan American World Airways' sponsorship of a free-flight payload event is that a separate and unrelated freight shall be moved, the aircraft taking off in one place and landing in another. This is what a full-size aircraft is expected to do, and the contest thus encourages models which resemble full-size jobs in many respects. We have chosen to interpret this as covering appearance too, so that our first consideration in this design was that it should be semi-scale.

Now, the carrying of a payload weighing four ounces in a model merely means, apart from certain minimum dimensional requirements in the fuselage, an increase in minimum required weight. The model using a 1 cc motor must weigh at least 6-1/2oz, or 10-1/2 oz. in flying trim with dummy.

From here on one's approach depends on one's ideas of wing-loading, power/wing area relationship, and strength. It is doubtful whether adequate strength could be built into an airframe of 3-3/4 oz (ie less 2-3/4 oz which is the usual weight of a 1 cc diesel) since the dummy's inertia can be quite considerable, and a total weight of at least 7-1/2 oz including motor is probably as low as would be practicable for all-weather flying.

It occurred to us that a model could be made to minimum FAI loadings and still have a good performance with the dummy added. The idea of a dual-purpose model of this nature appealed. Minimum weight of 7.06 oz/cc fits in well with our practicable minimum, and maximum total area would need to be, for this weight, about 250 sq in. However, we like lowish wing loadings if possible, and a loading of 8 oz/sq ft would seem as much as would give the type of glide we like, with the dummy in place; juggling a few figures suggested a wing area of around 250 sq ins with a 33% tail would be a successful compromise. FAI weight would have to be in the region of 9-1/4oz, which is not unreasonable for a model and motor of these sizes; final built weight came out at 9-3/4 oz. It was apparent from first glide tests that these loadings gave a floating, thermal-conscious glide in conjunction with the wing section used ; initial power flights showed a near-vertical climb empty, and a fast-climbing right-hand spiral loaded. Properly- trimmed, with an efficient prop, the empty performance is up to normal 1 cc contest duration standard..."

Update 19/09/2017: Added article and PDFvector plan tracing, thanks to hogal. 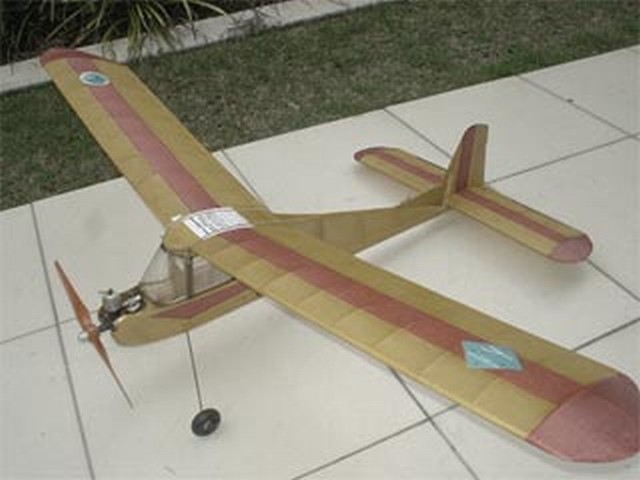 Hi Steve - another plane built from your fantastic site - a Paageboy [see more pics]. The only changes I made were in the shape of the windows, I made spats, and it is electric RC. Thanks again for all your hard work.
abtorrance - 12/04/2013
Add a comment