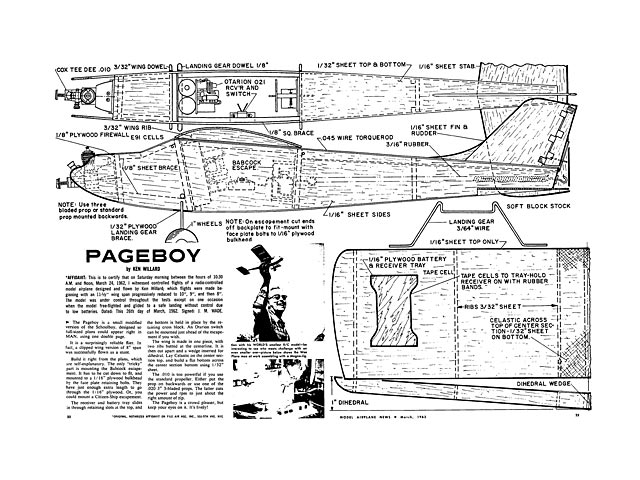 Quote: "Affidavit: This is to certify that on Saturday morning between the hours of 10:30 am and noon, March 24 1962, I witnessed controlled flights of a radio-controlled model airplane designed and flown by Ken Willard; which flights were made beginning with an 11-1/2in wing span progressively reduced to 10in, 9in, and then 8in. The model was under control throughout the tests except on one occasion when the model free-flighted and glided to a safe landing without control due to low batteries. Dated: This 26th day of March, 1962. Signed: JM WADE.

The Pageboy is a small version of the Schoolboy (oz1030) designed so full-sized plans could appear right in MAN using one double page. It is a surprisingly reliable flier. In fact, a clipped wing version of 8in span was successfully flown as a stunt.

Build it right from the plans, which are self-explanatory. The only tricky part is mounting the Babcock escapement. It has to be cut down to fit, and mounted to a 1/16 plywood bulkhead by the face plate retaining bolts. They have just enough extra length to go through the 1/16 plywood. Or, you could mount a Citizen-Ship escapement. The receiver and battery tray slides in through retaining slots at the top, and the bottom is held in place by the retaining cross block. An Otarion switch can be mounted just ahead of the escape-ment if you wish.

The wing is made in one piece, with two ribs butted at the centerline. It is then cut apart and a wedge inserted for dihedral..."

Update 06/06/2013: Replaced this plan with a clearer version, thanks to theshadow.

Article is included in the planfile. 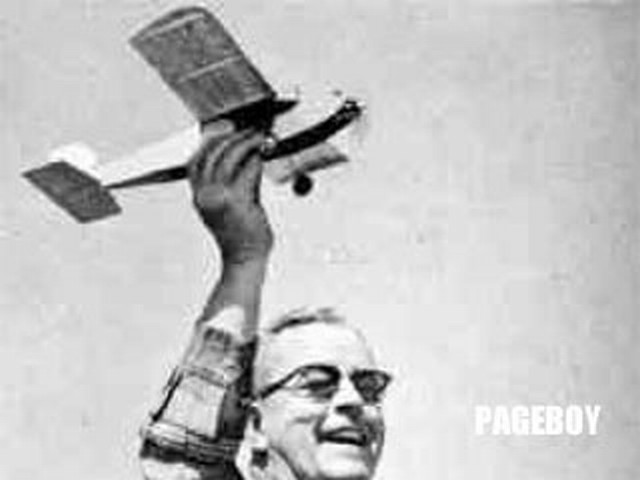