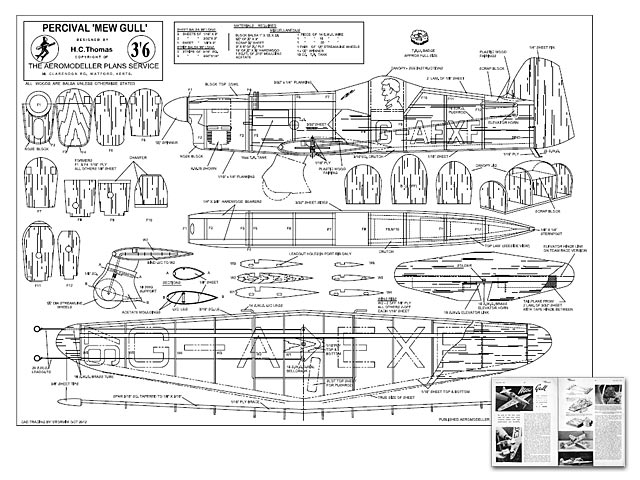 Quote: "A 1 inch to the foot scale class A team racer which combines realism with high performance and durability. Mew Gull, by HC Thomas.

ONE OF THE RULES with which one must comply when building a team racer is that the design should be 'scale or semi-scale'. Unfortunately this rule is not always enforced by organisers of team races and the result has been a gradual degeneration of appearance bordering on the hideous rather than realistic. However, there are very few scale subjects which lend themselves to the proportions of wing area, fuselage depth, etc as required by the rules. The TK4 Team Racer (oz2343) already in the APS range is one suitable type; but for the wing area needed the fuselage becomes larger than one might desire for high speed performance, though 75 mph is still a possibility with a good engine. The earlier Percival Mew Gull possessed the right fuselage lines for high speed, and the blister type canopy fitted to G-AEXF soon after its return to Britain after the war allowed it to fill the requirement for fuselage depth at the cockpit - so this was chosen by HC Thomas for the most attractive model we describe here.

Wing area is 80 sq in, and speed approaches the 80's with a plain bearing Elfin 2.49, so its potentialities will be recognised by all and the few concessions made for better T/R operation do not detract from scale appearance. These are the sweep forward of the undercarriage, and the very slightly increased tail area, plus the use of a fully symmetrical wing section. Three prototypes have been made, and apart from needing slight tail ballast to get the CG located correctly, have proved entirely trouble-free. Latest of the line has the elevator area increased to 50 percent of the total tailplane and this is a wise modification for the tempo of modern Class A team racing. For scale work, the elevator shown gives full control with ample reaction for sport flying.

Start with the wing by making the 3/16 spar over the plan complete with brace, fitting ribs, leading edge, and top sheet, and binding the u/c to ribs W2. Make up the bellcrank assembly and lead-out wires, fit to wing by means of upper ply plate in top surface, add push rod passing through... "

Quote: "Attached is my latest CAD tracing. Percival Mew Gull 24-3/4 in span C/L scale racer by HC Thomas. From Aeromodeller September 1955. Apologies for the 'TBU Badge' being a bit vague, if anybody can supply a picture of what it should look like, then I'll update the drawing." 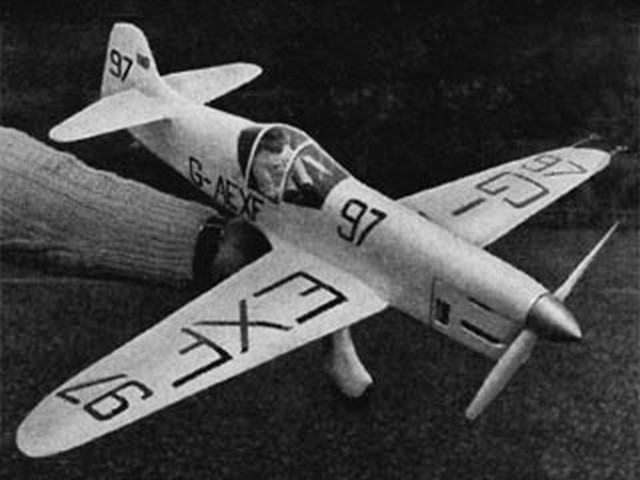 Hi Mary, I have included a pic of the Percival Mewgull which I built in 1980 [more pics 003]. I am just finishing another exactly the same. The registration is the same as this model [Oz 3566], but they have different cockpit canopies. Put the picture with this one to show the variations of the aircraft.
TerryBrown - 14/09/2016
Add a comment