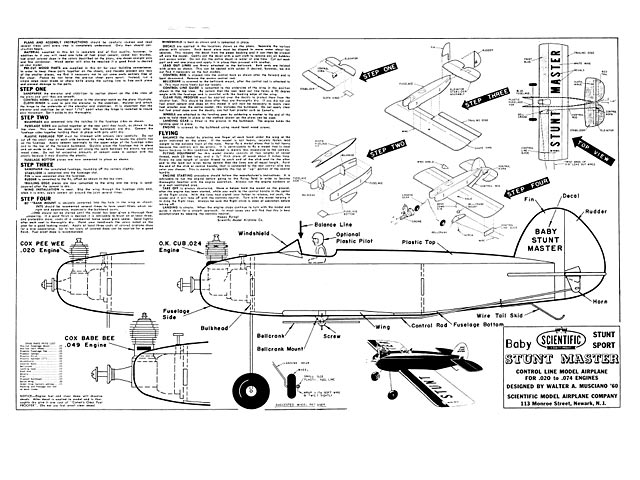 Baby Stunt Master. Control line model kit. Quote "This is one of a series of models designed by Walter A. Musciano and kitted by Scientific Models in the United States owned by Mr. John Frisoli. Most of these models had carved balsa fuselages, one piece wing and all accessories except engine, paint and glue. They were designed for .049 engines made by OK Cub (Herkimer Tool and Model Works) but mostly for the fabulous Cox .020 and .049 engines. They flew nice but, naturally no stunts. Just round and round. These models however, did introduce several people to the hobby of aeromodelling. They were easy to build and the kit quality was very good indeed. No scale models, just a resemblance of a so called P-51 or Piper Comanche or other full size airplanes. They also shared many components like the landing gear, wheels, spinner etc. They were manufactured from 1950 to 1972. Then the Scientific company turned its efforts to make sailing ships static models like the Golden Hind, the Cutty Sark etc. Scientific closed down in the eighties." 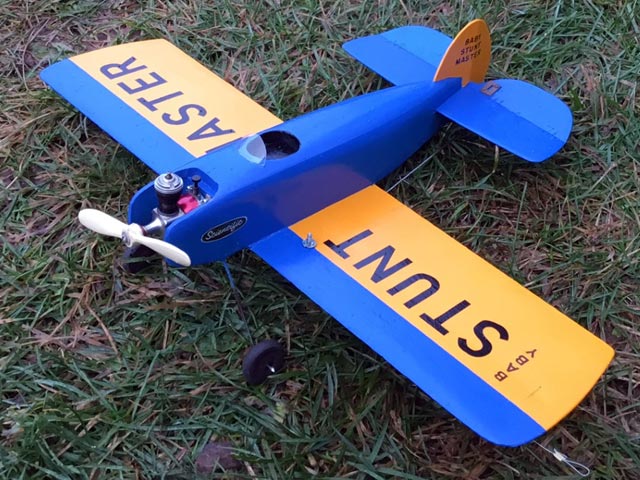 well,I'll try this again. found an opened kit at a consignment shop. this was the 1st u/c model I built at the age of 12. well,decided to give it a try(quick glue/monokote) turned out MUCH better than the original! Dad would've been proud the second time around. LOL. not intending to fly,Vertigo,and age 78. many fond memories of Miami Fl.(3 rings flying field) keep up the good work.
Martin "Rusty" Walsh - 17/09/2019
Two photos of my Baby Stuntmaster built from Outerzone plans [main pic, 003]. I used the small three-view to develop the wing and tailplane size/shape and block balsa for the upper deck in lieu of plastic. Power is Cox Pee Wee .020 and finished with butyrate dope.
ChrisMoes - 01/07/2021
Add a comment