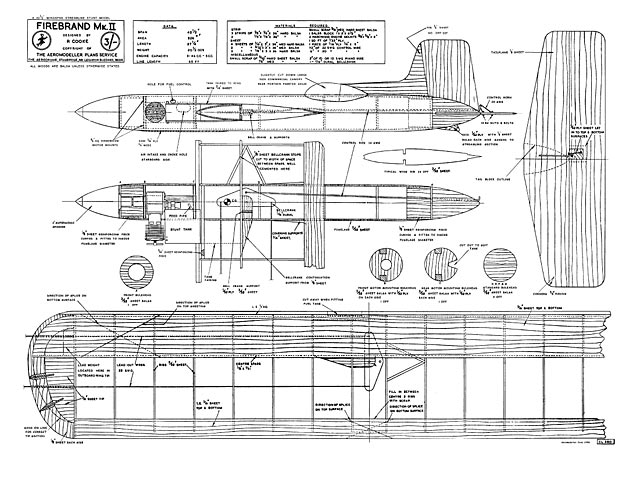 Quote: "PRESENTING a new form of tubular balsa fuselage construction, the Firebrand is a fast flying stunter suited to the latest 3.5 cc to 5 cc motors. Its sleek lines are apt to mislead one into thinking in terms of frailty, whereas it has proven tough beyond comparison with other standard forms of structure.

We have seen wound sheet, planked and commercial paper-bound sheet used on other control-liners and free-flighters, but this wrapped construction is different. Firstly, it allows the 'works' to be put inside with the least difficulty (ever tangled the push-pull rod with the formers in a planked job?) and secondly, it's the quickest built all-balsa fuselage, outside the crude box type.

Building Instructions. Firebrand is built in three stages. First make the fuselage halves, then the wings and tailplane and, finally, assemble the whole in strict sequence.

Fuselage Halves. Find a round former of approximate fuselage diameter. Cut out from 3/32 in medium sheet balsa two fuselage halves 3-1/4 in wide and of exact length. Mark all bulkhead positions on the inside surfaces and steam the outside surface. During the steaming, the side will naturally curve, so place it on the former occasionally to check that it will bend the full curve without forcing. When sufficiently bent lay the side on the former and either pin or wind tight with a piece of elastic. Dry the curved balsa near a fire for ten minutes and then repeat the process for the second half.

Cut out all bulkheads and halve each, with the exception of B and C (the two supporting the engine mountings). Cut out the portion occupied by the wing in each half and cement each bulkhead firmly in its correct place. Bulging between bulkheads can be removed by a skin of cement to pull in the offensive spot. Cement in place the 1/8 in soft sheet reinforcing pieces at the nose and tail, which are formed in the same way as the fuselage side. These can be made with 3 in wide balsa plus a small strip for packing.

Cut out the plan view of the tail block from1/8 in sheet, and cement temporarily to each side of it a block of 1 x 2 in soft balsa, with the grain fore and aft. Mark out the diameter of the fuselage on one end and sand and carve the block to shape. Separate the halves from their 1/8 in centre core and cut a strip approximately 1/8 in wide across the forward end of the core. Now pin all three together again, using this strip instead of the full plan view of the core. (This allows easy fitting of the tailplane.) 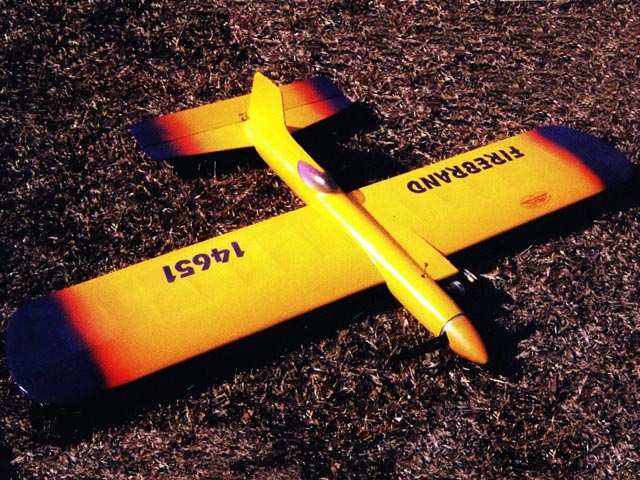