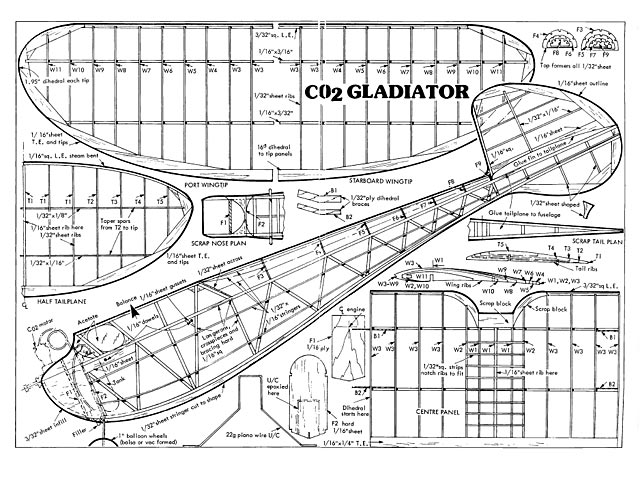 DESIGNED WAY back in 1940, Maurice Schoenbrun's shapely Gladiator (oz4) with its big 67-1/2 in broad-chord wing was typical of a new breed of American Class C gas models devised at the beginning of the '40s in response to free flight competition rule changes calling for a minimum wing loading of 8 oz per square foot.

The graceful Gladiator met the challenge with spirit, turning in consistent flights of over three minutes on a twenty-second motor run - and this without the benefit of thermal assistance. On the occasions when thermal territory was entered, the model would soar and float for ever and, at the 1940 US Nats in Chicago, it was lost for the rest of the day, out-of-sight after 35 minutes, this too on a twenty-second, half-throttle Dennymite motor run! It was, and still is, a classic both in looks and performance.

The idea for a CO2 version was sparked by the discovery of quarter-scale dimensioned drawings in an out-of-print MAP special of some five or so years ago (Radio Control Aircraft Extra). These, based on first-published drawings from the March 1941 issue of Air Trails, depicted Tom McCoy's radio-assist revival of the design. After a smidgen of photo-copied enlargement the resulting plan, giving a span of 20 in (just over one-third of original size) looked an absolute natural for CO2. Even the wood sizes translated perfectly to standard dimensions!

Go for your Gladiator: Building the CO2 Gladiator proved to be pure fun! Cyano was used throughout for speed and lightness; and some carefully selected 1/16 sq and 1/8 sq strip plus 1/32 and 1/16 sheet balsa, together with a scrap of 1/16 ply, is all the timber you'll need for hours of pleasure! Choose medium hard 1/8 sq for the wing leading edge and a similarly robust pair of 1/16 sq strips for the lower longerons (the finished model will come in for a fair bit of handling around the lower front fuselage and our somewhat soft longerons on the prototype soon bowed under tissue tension and over-excited handling!).

Wing trailing edges were sliced from medium 1/16 sheet and all the ribs (both wing and tailplane) should be from the lightest 1/32 sheet you can find. Think 'lightness' all the time when building the fin, tailplane and fuselage aft of the indicated CG location; this will pay dividends when it comes to flying and you may just manage to avoid having to add the slug of plasticine to the motor compartment which we found necessary.

The recessed wing centre-section leading edge is a characteristic and pretty feature of the Gladiator. It could have been designed with CO2 in mind; the old Micro Mold Shark motor we used fits snugly just where the original Gladiator's petrol engine was located and the coiled CO2 pipe from the Shark's cylinder head tucks neatly into the leading edge rebate. The tank should be placed as close as possible to the back of the 1/16 ply firewall (which carries the bound-on 20 swg undercarriage). The motor bolts to a supplementary 1/16 ply former ahead of this original firewall; the charging nozzle, which is carried behind it, protrudes through the bottom of the cowling block.

Wheels are simply from 1/2 in soft balsa block, spun up and sanded to appropriate balloon shape in an electric drill, bushed with scraps of plastic insulation from electrical wire and finished off with thin card hub-caps to conceal the blob of solder which secures them to the axles.

The completed airframe was given a coat of thinned sanding sealer and carefully sanded. Lightweight tissue was applied using a 50/50 dope/thinner mix as adhesive; the model was then subjected to a light water shrink followed by three coats of dope thinned with 75% thinners. Decoration from coloured lightweight tissue was, naturally, restricted to a minimum and the all-up, unflown weight came out at 49 grams.

Gratifyingly, the model flew straight off the board, describing wide left-hand turns in an extended glide on gas charges from a far-from-fresh CO2 bulb. Later, when warmer weather arrived and with a new bulb in the charger, more energetic motor runs produced gentle power stalls which were soon eliminated by the application of the noseweight - actually three grams in all -referred to earlier. At this stage the tailplane and fin assembly was cyanoed in position for good, making the tail fuselage dowel, tailplane fixing bands and hook redundant and contributing in a small way to the reduction in tail weight.

In this configuration the Gladiator does everything that was hoped for, flying smoothly in wide, climbing left-hand circuits and gliding on and on when the power runs out - just like its big brother of nearly fifty years ago!" 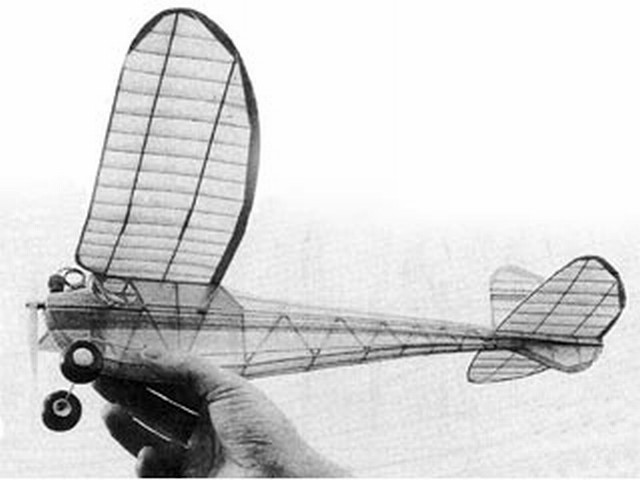