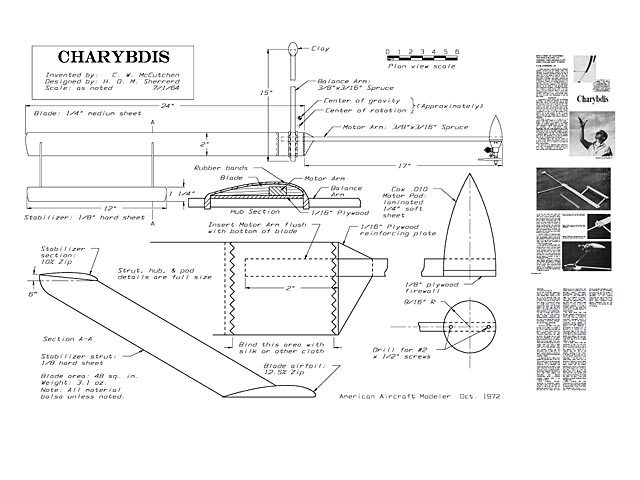 Quote: "In Greek mythology, Charybdis was an extremely powerful whirlpool off the Sicilian coast. This helicopter is not particularly powerful, but like its namesake, everything revolves at a rather high rate of speed, and to that degree at least the name was appropriately chosen by the inventor, Charles W McCutchen of Princeton, New Jersey.

The Charybdis (oz5275) was developed 18 years ago, while McCutchen was living in Cambridge, England, and caused something of a sensation when he took it to the British Nationals of 1954. Since that time, variations on the 'McCutchen Machine,' as the design is more generally called, have occasionally appeared in European magazines, but a prophet is usually without honor in his own country, and the Charybdis seems to have been completely ignored in the US - a pity, since it is no tougher to build than a good hand-launched glider, and more fun than tying firecrackers to your old flying scales.

Construction is quite simple, with the emphasis on strength. The blade and stabilizer are of sheet rather than built-up, the motor and balance arms are of spruce, and the hub is reinforced with 1/16 in plywood. The motor arm is inlaid into the lower surface of the blade, the reinforcing plate doubleglued over the joint, and the whole bound with silk or other light cloth. This area is then virtually unbreakable, and also a good flat surface for the balance arm to bear against. You can, of course, glue or even bolt the balance arm in place, but Charybdis is much easier to carry around if the arm is detachable.

The blade is simply a 2 ft x 2 in lath of 1/4 in medium sheet balsa, shaped to a constant Clark Y section. No wash-in, no washout, no dihedral breaks; the squarest, easiest wing you ever made. Use a template to maintain section accuracy. Don't try something with under-camber instead. McCutchen tried both under-cambered and curvedsheet airfoils, and found the resulting Charybdis to be unimproved, at best, or just plain unstable, at worst. The stabilizer struts are 1/8 in hard sheet sanded to a streamline section. Use plenty of glue and perhaps even some silk reinforcing at the strut-to-stabilizer joint, the only vulnerable area of Charybdis.

The stabilizer itself is also 1/8 in hard sheet, but is given a lifting section. Be careful to set it at an angle of at least -5° or -6° relative to the blade, as this is most important. The motor pod is so designed mainly because it looks good. The streamlining probably helps a bit, but is really unnecessary. On the other hand, it does provide a solid mass behind the firewall..." 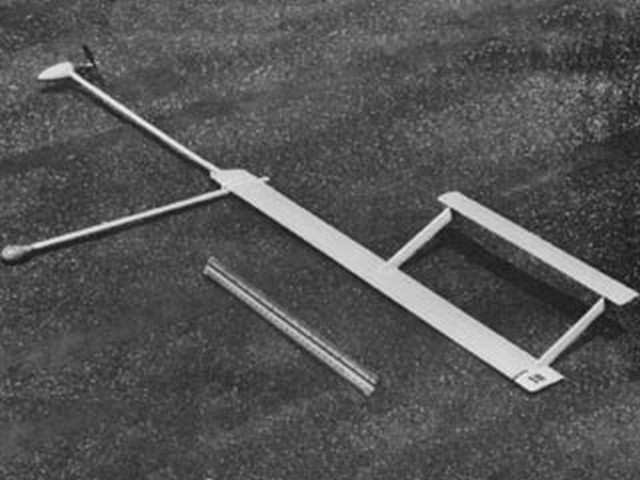