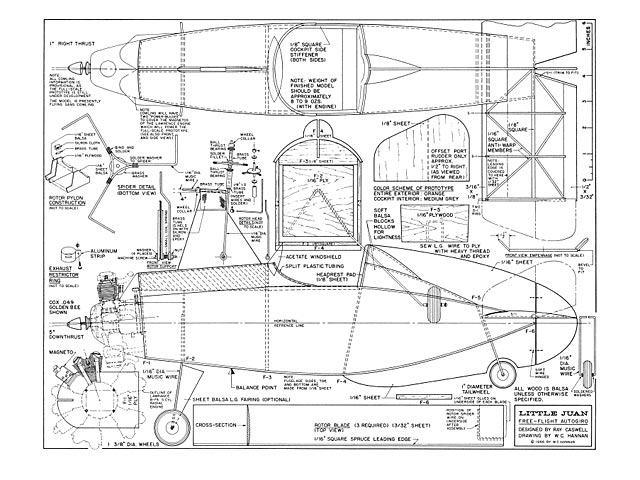 Quote: "Gas, rubber, or tow-line, gyros are fun. After six rubber-powered and ten gas jobs, this nifty .049 ship was perfected. Described are unusual characteristics and techniques for flying and adjusting. Anyone for radio? Little Juan, by Bill Hannan.

The author has long been interested in creating a full size ultra-light personal flying machine which could safely fly at low speeds, and still retain good high-speed characteristics. Helicopters were ruled out because of their complexity. Conventional airplanes were considered unsuitable because of their poor low-speed characteristics. Two interesting concepts remained: One was aircraft of the Flying Flea type, which are able to operate in the super-stalled realm of flight, but which suffer from certain other draw-backs, The remaining type was the autogyro, which was pioneered and developed by Juan de la Cierva, of Spain, in whose honor 'Little Juan' was named.

To me, the autogyro seemed to be the most logical approach to filling my requirements. Therefore, I have concentrated on the development of an ultra-light version. Originally, my intention was to build a radio-controlled model to explore the overall design concept. However, by the time that a model was produced which was stable enough to entrust with expensive RC gear, remote controls no longer seemed necessary. Furthermore, the less crowded conditions in the free flight area of our local model flying field enabled a great many more flights to be made during any given visit to the field. Since a large number of experiments were required to learn the characteristics of autogyros, many test flights were required before a satisfactory configuration was developed.

Models ranging from a 1/20th-size indoor rubber job, to a 1/5th-size .099-powered gas model were built during a period of about three years. A total of six rubber and ten gas-powered models were constructed and flown to evaluate the various design features, and to learn as much as possible about autogyros, prior to committing myself to a full-size project. Many friends criticized me for proceeding so rapidly on the models and yet so slowly on the full-sized aircraft. My stock answer to them was: Why hazard my neck on unexpected problems, which can be discovered and solved without risk in a model? Besides, it's a lot of fun to fly the little ones!

At the present time, my full-scale mock-up has been completed, the actual flying version is underway, and some of the recent refinements have been incorporated in the model drawing. The Little Juan model is quite conventional in its construction, and should present no unusual problems, however some clarification of details, especially those peculiar to auto-gyros, may be in order.

Rotor Spider: Bend the three 1/16 in diameter music-wire rotor spider arms, as shown on the drawing. Position the arms as indicated, then bind and solder them together. The hub is made by drilling a 3/32 in diameter hole in the center of the thin brass disc, Insert a 3/32 OD brass tube into this hole, being careful to achieve correct alignment. Now solder the tube and the spider arm assembly to the brass disc which will complete the unit.

Article pages (complete) text and pics, thanks to theshadow. 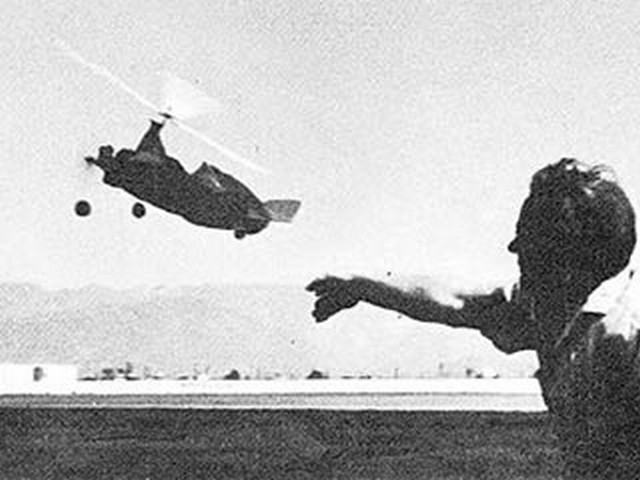 Hi Steve, Page 54 of the Little Juan autogyro article is missing, since the incidence angle of the rotor blades isn't given on the plan, is it possible that it could be on the missing page 54? Best Regards,
Pete - 05/09/2015
According to the sheet of instructions which came with my copy from SAMS, a good few years ago, the rotor incidence should be TE 1/16" higher than LE.
anon - 08/09/2015
According to the separate instruction sheet, the entire rotor should be tilted 4 degrees to port, looking from the rear. I built an Indian Mills powered version years ago, but it was written off before I got anywhere with it. One day soon, I'll try again!
anon - 10/09/2015
Add a comment