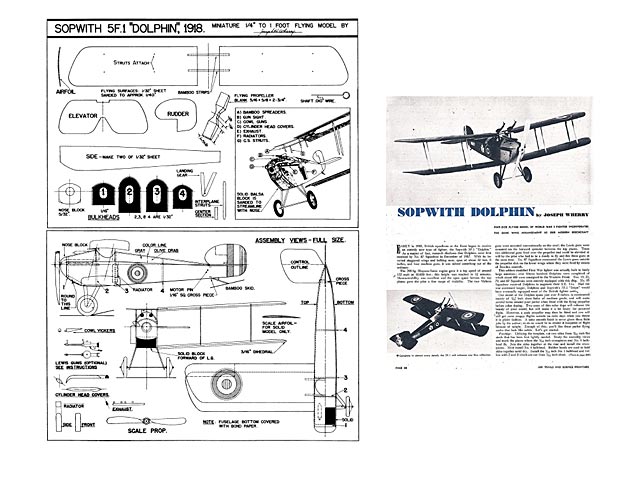 EARLY in 1918, British squadrons at the front began to receive an entirely new type of fighter, the Sopwitb 5F.1 Dolphin. As a matter of fact, research discloses that Dolphins were first received by No.87 Squadron in December of 1917. With its inverted staggered wings and bulldog nose, span of about 32 feet 6 inches, and four machine guns, it was indeed something out of the ordinary.

The 200-hp Hispano-Suiza engine gave it a top speed of around 122 mph at 10,000 feet; this height was reached in 12 minutes. Maneuverability was excellent and the open space betwen the top planes gave the pilot a fine range of visibility. The two Vickers guns were mounted conventionally on the cowl; the Lewis guns were mounted on the forward spreader between the top planes. These two additional guns fired over the propeller and could be elevated at will by the pilot who had to be a dandy to fly and fire these guns at the same time. No.87 Squadron remounted the Lewis guns outside the propeller disk on the lower wings where they were fired by means of Bowden controls.

This seldom modelled First War fighter was actually built in fairly large numbers: over fifteen hundred Dolphins were completed of which about 400 were consigned to the Western Front. Nos. 19, 23, 79, and 87 Squadrons were entirely equipped with this ship. No.85 Squadron received Dblphins to augment their SE5As. Had the war continued longer, Dolphins and Sopwith's 7F-A Snipe would have eventually equipped most of the British fighter units.

Our model of the Dolphin spans just over 8 inches, is constructed mainly of 1/32 inch sheet balsa of medium grade, and will make several turns around your parlor when fitted with the flying propeller before color doping. Two coats of thin color dope will enhance the beauty of your model, but will make it a bit heavy for powered flight. However, a scale propeller may then be fitted and you will still get some snappy flights outside on calm days when you throw it in glider fashion. A satin smooth finish is never given these little jobs by the author; to do so would be to render it incapable of flight because of weight. Enough of this; you'll like these parlor flying scales that look like solids. Let's get started.

Fuselage: Utilizing the template, cut two sides from 1/32 inch flat stock that has been first lightly sanded. Study the assembly views and mark the places where the 1/16 inch crosspieces and No. 4 bulkhead fit. Join the sides together at the rear and install the cross-pieces. Next install No. 4 bulkhead. Rubber bands are used to hold sides together until dry..." 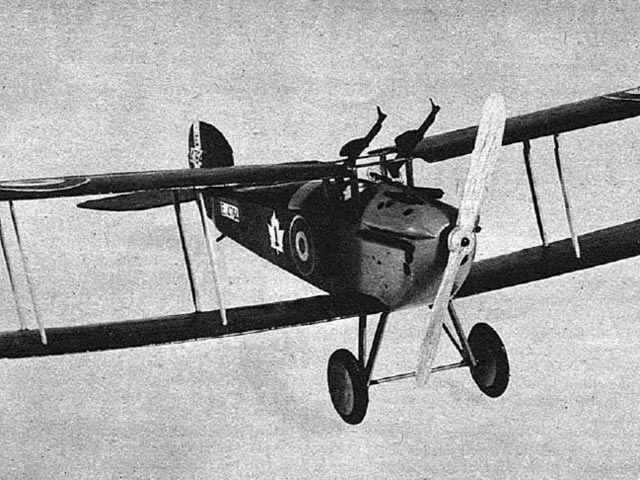