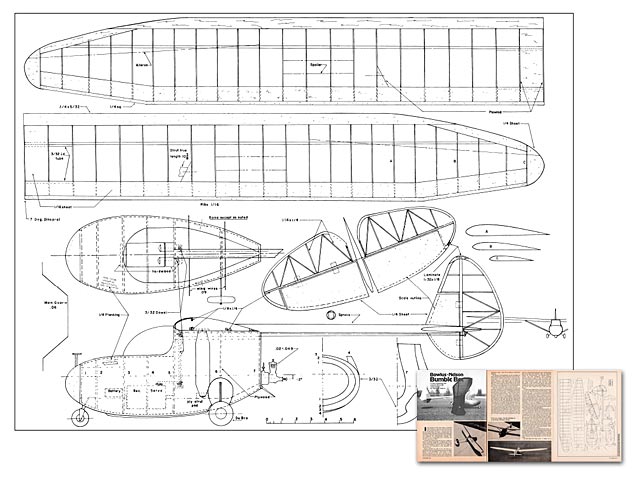 In the summer of 1974, Bob Gable, a topnotch builder (Mohnton, Pennsylvania) and long-time friend, decided to build a 1 in scale version of the Bowlus BA100 glider. We began a program with Bob doing the design, shelf-paper drawings and building and me doing a search for more material on the real glider and preparing the finished-model drawings. We pursued this on a correspondence/US mail basis into the fall and winter of 1974.

Amongst the material Bob sent me was a magazine photo of a Nelson Dragonfly. In talking with Monty Groves about the Bowlus, he stirred his memory and personal knowledge of Nelson's work and suggested this project, the Bumblebee, as the Dragonfly was initially known.

Monty provided me with an 8 x 10 print of a Bumblebee three-view drawing and numerous excellent photos of real Bumblebees. Gene Strull, a close business associate of mine, did a blow-up of the three-view which helped to resolve some anomalies in the fin/stabilizer locations and accurate scaling of the bulkheads. Then I took off on full-size construction drawings.

The appeal of the Bumblebee was the availability of good, detailed data and the uniqueness of the aircraft. I could find no evidence that an R/C model had been done before. At 1 in scale, you have a reasonable-size model, moderate wing loading and an interesting sport-flyer project. So far, when people see the model they say: What's that? for openers. Then come various comments as you might guess, but mostly favorable for the graceful wing shape makes it quite attractive.

Begin the fuselage by cutting the keel to shape and pinning to the plans. I cut the bulkheads 3/32 off center so I could notch the left ones to full depth and still have the keel end up in the center. I used 3/16 sheet center-line longerons between formers 1 and 3 and 5 and 7 to provide a rigid shell. Cut out the center of bulkheads 3 through 5 for access to install battery, receiver/servo and linkages for rudder/elevator controls. After pinning the longerons to the plan, glue the left bulkheads in place, being sure they are perpendicular to the board. Then glue one 3/32 plank strip to the high points on each bulkhead running from bulkhead 1 to 7. Wet only the outside of the strip. I stripped the planks from 3/32 sheet and used 0.20" wide stock.

Remove the left half of the fuselage from the plans after it is thoroughly dry and glue right portions of bulkheads in place, being sure to keep them perpendicular to keel and longerons. After the bulkheads dry, glue one strip to high points opposite the 3/32 strip on the left side. Glue three to four more strips on, alternating left and right. Now install landing gear..." 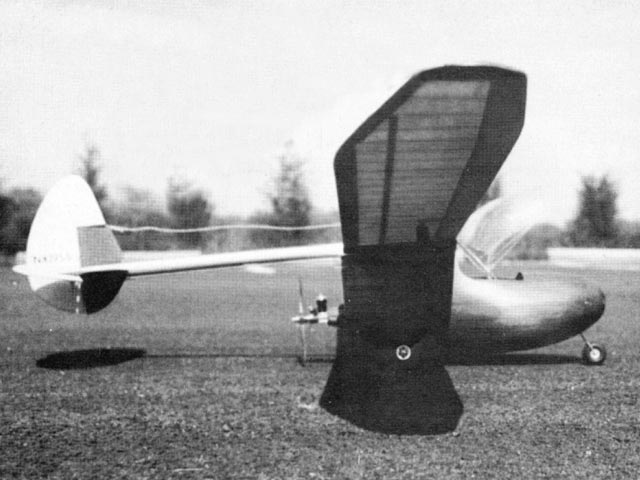 Check the chord dimensions for each wing. I didn't and found almost a cm difference when mating the two sections. I'm going to do it again and use the reverse of the plan of one wing and ignore the other. Thanks so much for the site - it's a real pleasure cruising the plans!
anon - 09/10/2015
Add a comment