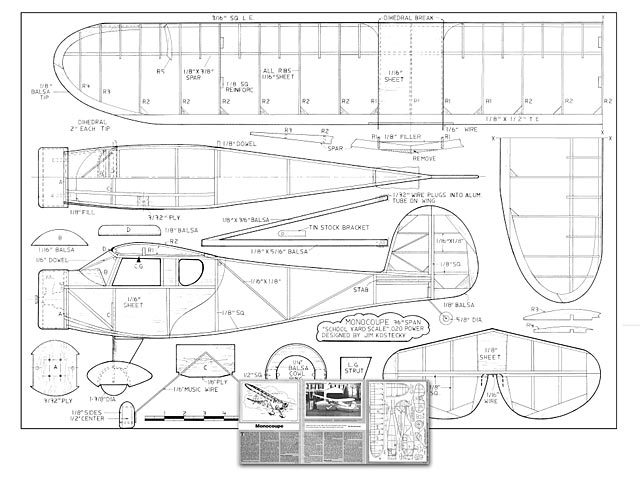 Quote: "The best part of the flight, for me, was watching the sun shine through the translucent covering at about 150 feet altitude. It was high enough to let you know it was flying but low and slow enough to let you see its shape and beauty. I wanted the Monocoupe to fly slow at about that altitude and float in for a landing on those calm summer afternoons or evenings in the schoolyard near my home. It would he powered by a Pee Wee .020, hopefully have a six ounce wing loading and use an Ace Pulse Proportional System. The drawing began to take form.

First, the rubber plan was doubled. That didn't give me quite the area I needed so I stretched the span to 36 inches. This gave me an aspect ratio similar to the old-timers I'd been flying yet still look okay. Stabilizer area was increased, incidence determined, and structure engineered. Less is more, a design concept I subscribe to, was instrumental in selecting sizes and materials. Don't beef anything up! It gets heavy, flies faster, and breaks easily.

A Pee Wee will swing a large prop but I've broken more than one crankshaft in a crash because of the leverage involved. Why not a Davis Diesel conversion? So, I did. The conversion includes a stronger crankshaft. The whole works swings a 6x3 prop pretty nicely which helps get some air moving outside the large diameter cowl. An unconverted engine should still do the job okay. The geared prop idea seems to have potential except for the weight in this case. The whole airplane ended up at eight ounces for an approximate 6-1/2 ounce wing loading.

The Monocoupe, as presented, is my impression of the aircraft. The appearance and charm of the original has, for me, been retained; but flyability has not been compromised. The drawing shows a version which I hope to build for one of the miniature multi-channel flight packs available. I swear the stick on my Ace pulse transmitter is bent at a 30 degree angle from trying to flare out landings with an elevator control that doesn't exist. If you build it for pulse rudder only, add 1/16 inch positive incidence to the wing and about three degrees down and two degrees right thrust to the engine. Modify the rudder so you have a lb- inch sheet movable surface of about one inch chord at its widest point. The bottom section should be stationary so you can route the torque rod through it. If you have a pulse system, I'm sure the preceeding information is more than adequate..." 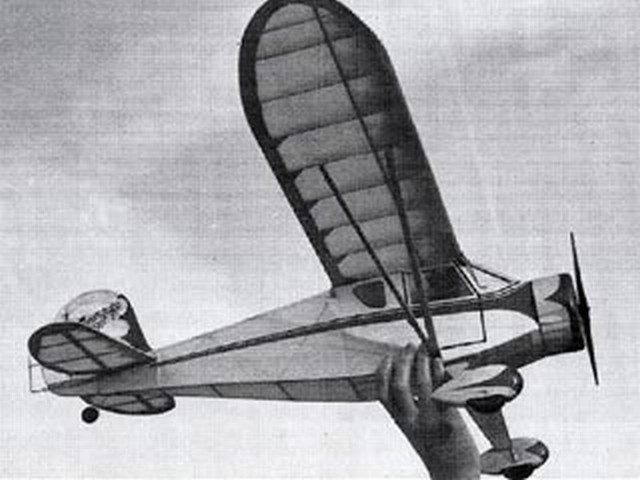