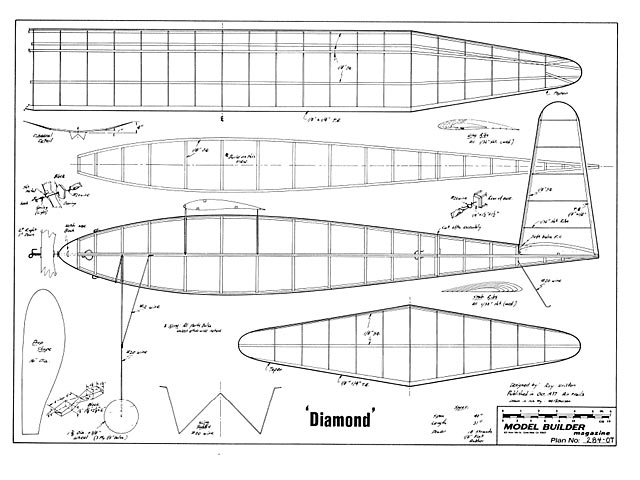 The Diamond was first published in Air Trails October 1937. This here is a later redrawn plan for MB in 1984.

Somewhere in time between the disappearance of motor sticks and the arrival of folding props, the 'diamond' fuselage rubber model came into existence. There doesn't seem to have been any logical, aerodynamic, or performance improving reason for rotating a square cross-sectioned fuselage 45 degrees before adding wings, landing gear, and tail surfaces, in fact it sorta complicated the process, but they always looked good to me, and also, I guess, to the many modelers who created them.

One of these models that caught my eye, that I kept going back to in my magazine collection, was appropriately named 'The Diamond.' Designed by Roy Wriston of Tulsa, Oklahoma, it was one of the more competitively successful diamond fuselage models, and was featured in the October 1937 issue of Air Trails. With a 29-inch long fuselage and tapered 150 sq in wing, it was a terrific flying model, but was undersize for Wakefield competition.

Roy modified the 150 Diamond to 200 square inches, lengthened the fuselage to 36 inches, and qualified for the 1936 Wakefield contest with an O.O.S. 41 minutes, 10 seconds flight. Photos of the Wakefield version described in the article indicate that he increased the center wing panel to 27 inches (18 spaces at 1-1/2 inches each), and made un-tapered outer panels with five 1-1/2-inch spaces, plus rounded tips three inches long. The stab was the equivalent of two outer wing panels put together. As photos show the Wakefield version, it should be Old Timer legal to make these mods to the plan if you want to fly in OT Wakefield. Check with John 'Daddy Warbucks' Pond.

The smaller ship seems prettier to me, so we've stuck with that original Diamond plan, just as Air Trails' Gordon Light chose to do. Change it if you wish. Original building instructions were very brief, and I see no need to expand on them. if you can't build this easy one without instructions, you shouldn't even tackle it. However, the balancing and flight adjustment technique is very well described, and is a system that is very useful for any similar model, so we'll quote it word-for-word:

Select a very calm evening for test flying. A grassy field will reduce damage to a minimum during the first few treacherous trial glides. If your model shows stalling tendencies during these glides, move the wing backward a trifle. If it dives, move it forward. However, don't move the wing too far away from the center of gravity. While this might produce a reasonably good glide, it is practically certain to cause a disastrous flight under power. if necessary, change the incidence of the wing rather than resort to any great change in the position of the wing. The usual incidence used is raising the leading edge 1/8-inch above the trailing edge. The center of gravity should be at the center of the wing.

Start the power flights only after the glide is satisfactory. Try about 100 turns for the first flight. Then increase the number of turns to about 250. Bad adjustments will be revealed during a flight under this amount of power. Correct any galling tendency by in-creasing the negative thrust. This is conveniently done by changing the angle of the nose block. Insert small slivers of balsa between the top of the block and she first fuselage cross brace. Cement these blocks to the nosing as soon as you are satisfied with the adjust-ment.

About two degrees downthrust and one degree right thrust are used on the Diamond. The rudder is given a slight turn to the right and the model flies in

right circles. The model hops off in about three or four inches and pulls up into a fast, steep climb for about the first 40 seconds of flight. After this the model gradually levels off and a short time later goes into its glide. immediately after the takeoff, the model starts a right circle and continues through the flight and glide. for maximum flights, about 650 turns can be stored in a motor with two inches slack." 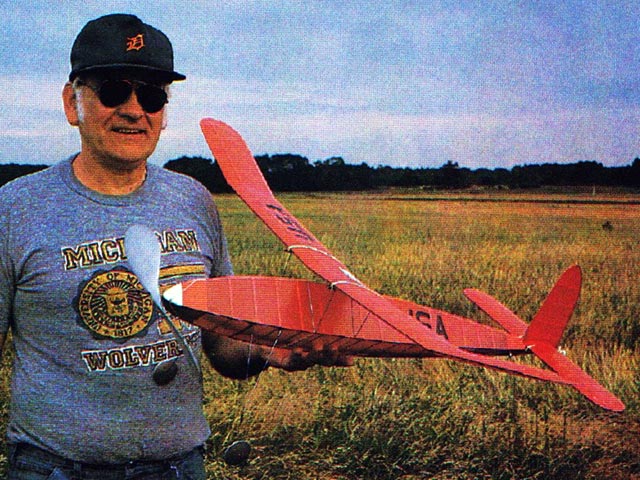