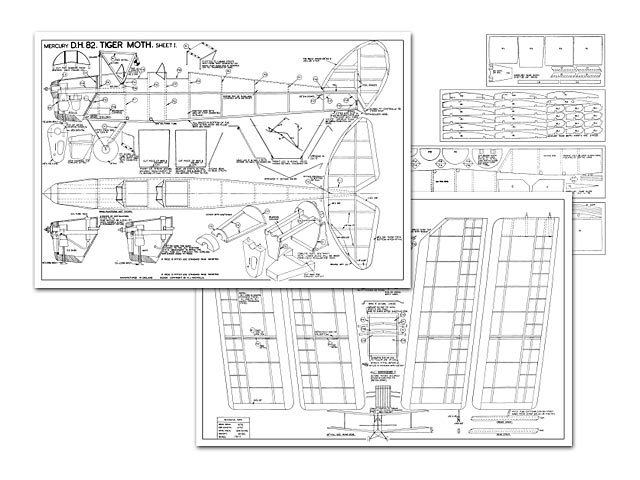 Quote: "The Tiger Moth is one of the world's most famous aircraft, and more pilots have learned to fly in the Moth than in any other machine.

During the war the Moth was a standard trainer for the RAF and was also extensively used in the Empire Air Training Plan, special versions for operating under unusual conditions being developed for use in different parts of the Empire. In Canada, for instance, the cockpit had a sliding transparent hood and the undercarriage could be fitted with skis for operating under very cold and snowbound conditions.

The Moth is still used in many civilian flying clubs and is frequently to be seen on club airfields. It has a wonderful reputation for reliability, case of control, low landing speed - in fact, for all those characteristics that are essential to a trainer without vices.

The Tiger Moth has always been a favourite with aeromodellers although there has not been a kit marketed before for making a true-to-scale free flight model for the modern small diesel motor.

This new Mercury kit now makes it possible for modellers of average experience to build and fly the Moth with every confidence. It is not, however, a beginner's model, and the trimming of the Moth, when built with scale dihedral (of 1 in under each wing tip), is really a job for the experienced flyer. With the extra dihedral suggested on the plan (1-1/2 in under each tip) trimming is much easier and the model is more stable in tight turns.

In the air the Moth model is most realistic, and cannot fail to delight the heart of every keen scale fan. The knock-off wing arrangements were thoroughly tested on the prototype model and proved absolutely crash-proof. It is not recommended that you modify the wing mounting in any way. The CG position is not critical, but it must nevertheless be adjusted carefully to match your incidences. The trimming instructions make this quite clear.

Build your Tiger Moth according to the plan and the following building instructions, and you will have a model that will give you many hours of enjoyable flying. "

Previous version. Also, kit instructions, 3 pages of text, thanks to gravitywell on HPA. 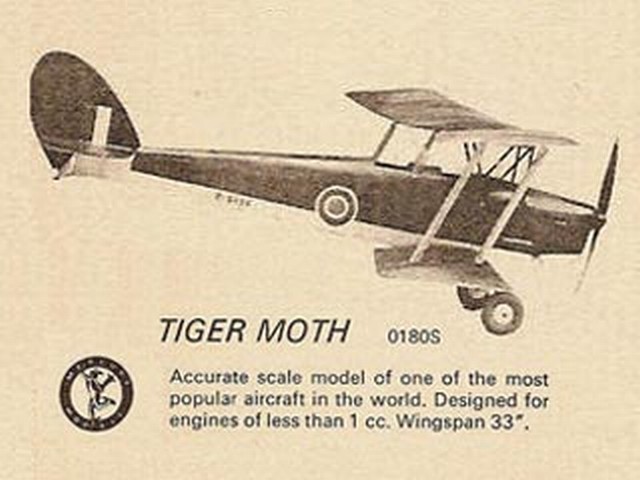 Print wood undersize
anon - 13/05/2015
Thankyou! Got right size printwood
anon - 18/05/2015
Built in my kitchen from an Outerzone plan, converted to three channel lightweight RC and electric power [more pics 003-007].
RobG - 29/03/2018
Beautiful model to build and fly but those square wing tips just ain't right. Could easily be altered for a more scale appearance.
RobG - 30/03/2018
The Tiger Moth flies well - too well. Years ago a friend of mine was flying one and finished for the day and strapped the model box on his back and cycled down the hill (he was flying at the back of the Cave Hill in Belfast) when he pulled over to let assorted fire engines, ambulances and RAF trucks pass as they raced up the hill. He continued home and, in the local paper the next day he read of a mystery crash at the back of the Cave Hill. It seems someone spotted an aircraft and heard the engine, a Mills .75, cut out and it dropped its nose and glided down out of sight, so he (like a good citizen) dialed '999' and reported a crash. A photo of Norman and the Tiger Moth appeared on the front page of the paper after that
Daithi - 04/04/2021
Add a comment