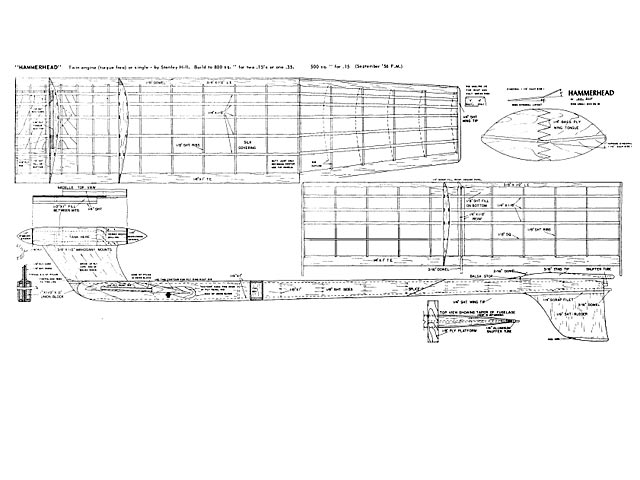 Quote: "The Hammerhead is a successful attempt to satisfy a long-standing desire to use 2 engines in one free-flight model. The use of tandem engines in a nacelle on a forward fin has many aerodynamical advantages. With this configuration there is no torque effect, as the torque of one engine cancels out the torque of the other. Except for the wash of the front prop on the fin (or pylon) there is complete absence of prop wash effects. This means that the Hammerhead can be flown with a wide selection of flight patterns and still not get into trouble.

In addition, the high thrust-line and low center-of-drag result in a force arrangement particularly well suited to vertical climbs and VTO launches. Adjustment for maximum performance is simple and straightforward in that there are no counteracting force adjustments such as thrust and rudder offset. As most European diesels are 2.5cc, or .1525 cu in displacement engines, varying combinations of these .15s permit entry in class B or C events. For one man operation (it can be done!) a diesel is a bit easier to handle than a glow engine due to the lack of batteries and wires.

Single-engine flight characteristics differ very little from those of the twin, there being somewhat more tendency to turn to the left under power. A single .29 or .35 would be fine in the 800 sq in model shown. A 500 square inch wing is recommended for .15s and a 300 square inch for .049s. Linear multiplication factors for the 500 and 300 sq in wing are .79 and .61 respectively. Simply multiply the dimensions on the plan by these figures to reduce the size of the ship. For other size models, divide the square root of the desired wing area by the square root of 800 (28.29). In the event that the 1957 FAI rule proposals go unchanged the "800" with one .15 or the 300 with one .049 will, with added weight, fit the rules exactly.

The plug-in wing attachment shown could even help bring back the day of the big ship. We manage to store the "800" version in the luggage compartment of our Volkswagen without crowding!

Construction is simple, therefore we will elaborate only where details need stressing. Remember, the magazine plan is 1/4 the size of the full-scale drawing..."

Quote: "Hammerhead – a low wing pylon model for push/pull twin or single engines. If that sounds strange then consider – it does have a pylon but that is used to mount the engine(s). The wing is fixed, using a ply tongue at the fuselage/pylon junction. Now for engines and we have the choice of not only power but wing size. I have scaled the drawing as referenced in the original and I believe it comes to 800 sq. ins (using the Acrobat measurement too gives me 408 sq. in on the wing panel). This scale, then is good for one .35 cu in or twin .15 cu.in engines. Scaling the wing to a total of 500 sq.ins (equivalent to a span of 68 ins or 80%) will produce a craft for for a single 0.15 cu ins motor. All in all an unusual aircraft. I have included the original scan plus my scaled and altered plan."

Original drawing unscaled ie as it appeared in print at 11 x 8in.
Article. 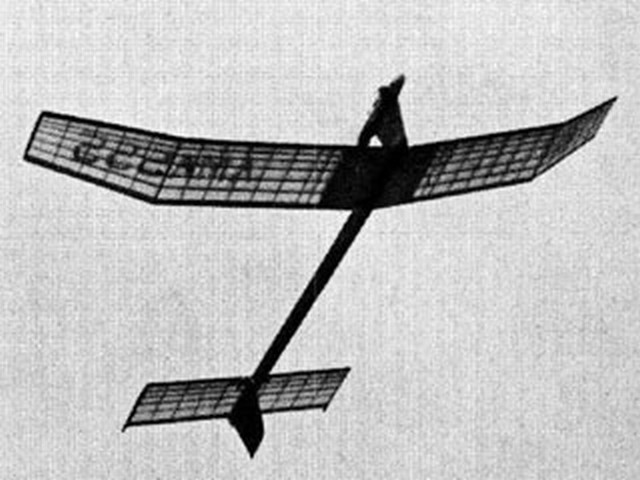