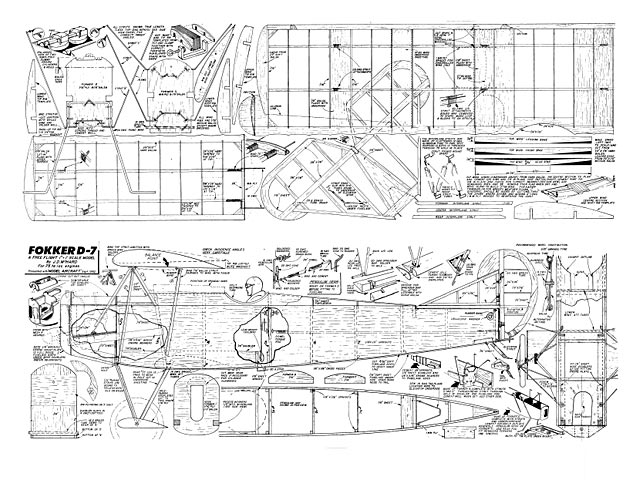 HERE is a model for the chap who has got beyond the beginner stage, for although it is not a difficult model to build, it does require careful work and accurate assembly. Scale areas are used throughout, with scale upper wing section contours, but the undersurfaces of the full size Fokker were slightly undercambered - ours are flat. The D.7 had no dihedral on the upper wing surfaces, but used a section which decreased in thickness from root to tip, giving, in effect, built-in washout, while the absence of external wing bracing wires greatly adds to the crash resistance of the model.

I have installed a pendulum operated rudder to compensate for the prototype's lack of dihedral and employed additional washout in the wing construction. Together, these two measures ensure that the model will have reasonable auto-stability in flight. Avoid stalls like the plague and aim for a wide left turn under power. Use a small acetate trim tab (turned up) on the starboard wing if necessary to prevent excessive banking.

Breezy conditions can upset a model even with such devices and there is no doubt that the lack of dihedral makes flight trimming a job for the experienced scale modeller only. Therefore, it is strongly recommended that the less experienced, or the man who wants a windy weather model, should build in 3/4 in to 1 in dihedral - retaining the auto-rudder.

The Fokker D.7 is very tough and will take a lot of punishment, but the weight should be kept below 12 oz for best results and this means watching material weights carefully - use soft wood on all low-stressed components. The Mills .75 is used in the original model and the exhaust gases are led out of a scale exhaust pipe on the starboard side - but this is really an added refinement, as is the 'duelling scarred' balsa pilot! Do not overpower the model, a hot 1 cc would be too much and could make trimming very tricky.

The colour scheme I used is that of Lieutenant Heldman - standard lozenge fabric wings, grey and green streaky fuselage with yellow nose (Jasta 10), yellow 'AH' monogram on the top wing, black and white checkerboard upper elevator surfaces and white rudder. The crosses used on Heldman's D.7 were not quite standard and, as shown on our cover photograph, are just about correct for this particular aircraft.

Incidentally, I used heavyweight Modelspan on the wings - two coats of clear dope and one of each of the lozenge colours. The remainder of the model, including the sheet fuselage, was covered with lightweight tissue.

A photograph in John Taylor's Plane of the Month shows a red and white D.7 as used in 'Hells Angels' and there are other simplified colour schemes for those who care to seek - Goering, for instance, flew an all white example.

Good luck with your model and when you have finished it do not forget to send us a photograph!" 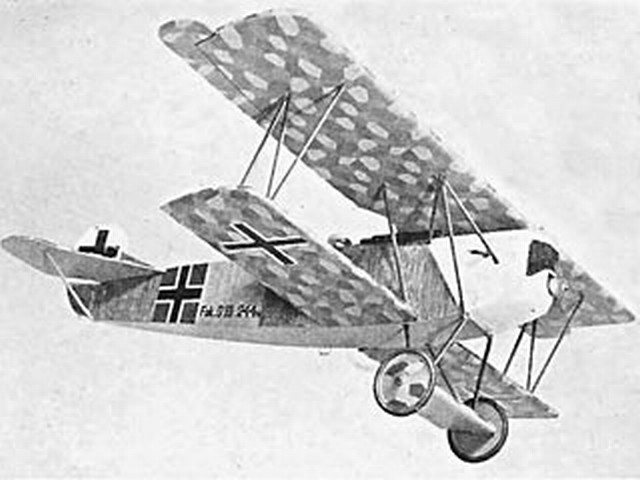