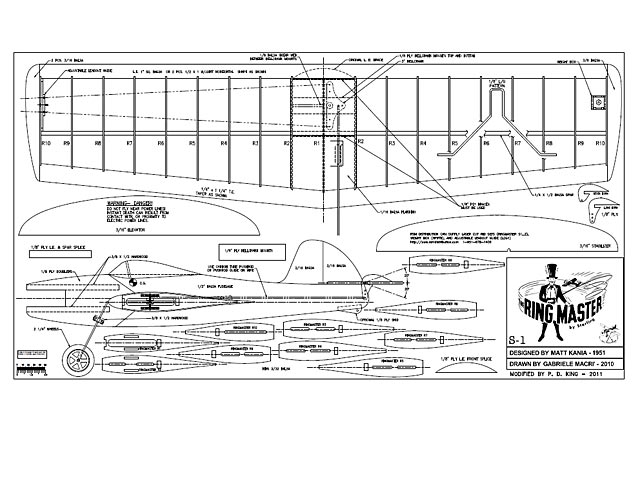 Quote: "Attached is a plan file for a Ringmaster S-1 which was kitted by Sterling Model Co in 1950. This is the profile one designed by Matt Kania. The original kit did not have an actual plan but only an assembly instruction sheet. The plan was made by tracing the parts from a kit and forming them into a CAD file and subsequently converted into PDF file. The file will print a full sized plan if printed at 100%. This is in 'public domain' so anyone can copy and use the file." 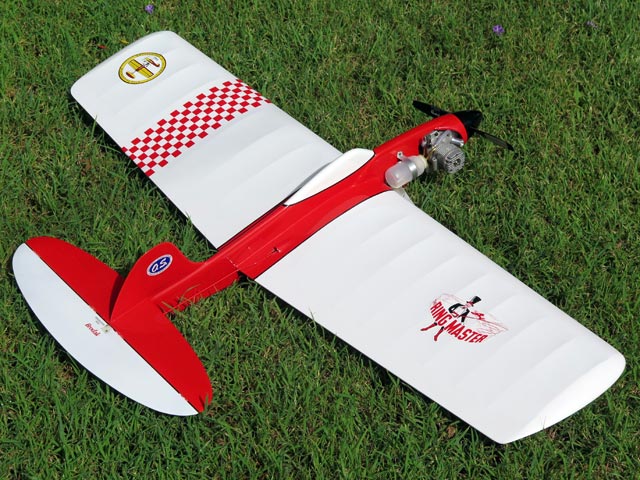 Many thanks to Tim who sent in the colour photos of his nicely finished Sterling Ringmaster [pic 003].
SteveWMD - 18/01/2013
This is an S-1 modified by long time builder Cliff Betz, with an I-beam spar and half ribs [more pics 004].
EdShearer - 12/06/2017
I changed the landing gear on this S-1 to wing mount and now I can make a decent landing [more pics 005-007].
EdShearer - 12/06/2017
Here's a few photos of my Ringmaster with Testors McCoy .35 Red Head [more pics 008-011].
ghostler - 20/09/2017
Added picture of box art [more pics 011], thanks to EdShearer.
Mary - 10/10/2017
Added nice image of the Ringmaster S-1, thanks to Russell Christensen [more pics 013].
Mary - 19/01/2018
I remember mine. I did so many "figure 9's" with it the center of the wing was solid 5-minute epoxy.
Ran a Johnson Combat Special with a 7-9 prop as a rat racer.
John - 12/01/2020
I built and flew this kit way back in July of 1968, just after being discharged from the U.S. Navy.
I had a ball flying that plane three or four times a day, two or three days a week. The plane met its demise when some younger kids were watching me fly it but became more interested in a buried cabled, sticking it up from the ground about four feet.
I saw the cable about one second too late and ripped off everything on the starboard side of the aircraft! Wham, no more plane. It was a lot of fun to fly. I didn't try to rebuild her because shortly after that we moved from Portsmouth, VA to Lebanon, IN where I became interested in R/C airplanes.
Bob Blubaugh - 01/04/2020
A pic of my Ringmaster S-1 for your site [pic 014]. Scratch built from plan. Regards,
Owen Cameron - 11/03/2021
I have recently taken up control line flying again (my main interest being Free Flight) and was told about the October Ringmaster event. I downloaded the plan from Outerzone and made the model [main pic, 015-017]. I am using a 1oz Sullivan tank with an OS 25 Fx. so I can chalk up a number of short flights for this event. The model performs well (fairly quick) and I intend to attach a larger tank for general aerobatic sport flying. Thank you for supplying these plans.
John Lewis - 06/09/2021
Add a comment