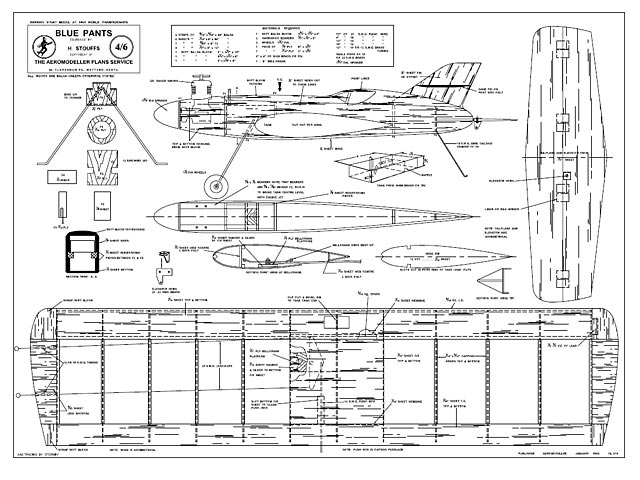 Blue Pants. 37in span CL stunter, designed by Henri Stouffs. Winning stunt model at the 1954 World Championships. From Aeromodeller, January 1955. This is a modern redrawn plan in PDFvector format.

Quote: "A new approach to stunt flying is presented in this thick - wing, short -moment design by HENRI STOUFFS - winner of the aerobatic section at the 1954 World Championships

WHEN HENRI STOUFFS of the Vogelzang club in Brussels won the acrobatic event at the 1954 World Control-line Championships, it was in part a victory for Britain. Henri started his aeromodelling when in England just after the War. Beginning with the faithful Keil Kraft Phantom (oz2806) and a Mills 1.3 cc diesel, Henri graduated through every control-line kit on the British market, and was one of the first members of the Ealing MFC. Now he is in World class, and in Blue Pants, his simple yet functional design for the ED 2.46 or similar, we have a model capable of putting on the best display of model aerobatics in Europe.

Tight looping radius, immediate recovery, and smooth straight and level flight characteristics are not easy to combine in one airframe; but this is one design that fills the bill. For combat we give it full marks and a thorough recommendation, as the simple sheet and block fuselage, thick wing and short moments make it extremely robust.

Start construction with the fuselage by cutting out the basic in. sheet sides. Do not cut the wing and tail panels away from the sides at this stage, merely mark the outlines, and keep the sheet solid for easier assembly. Bind undercarriage to F.3 and assemble sides onto F.2 and F.3. Cut bearers to suit tank and engine as on plan, and cement in place firmly after giving a first coat of cement on all four bearer faces. Add F.4, F.5 and F.6, with tailskid attached, (this is long to give better take-off action) and attach 1/8 in sheet base.

Cut and shape the tailplane and elevator, hinge together with strong tape as shown and bolt the horn in position.

The thick wing is best assembled onto the two mainspars loosely over the plan, and using the leading edge to give a true line-up. Whilst these joints are cemented and not absolutely firm, add the 1/16 sheet trailing edge pieces to get a final true wing, without warps. By sighting along the rib leading or trailing edge, one can soon check if the wing is twisted out of line..." 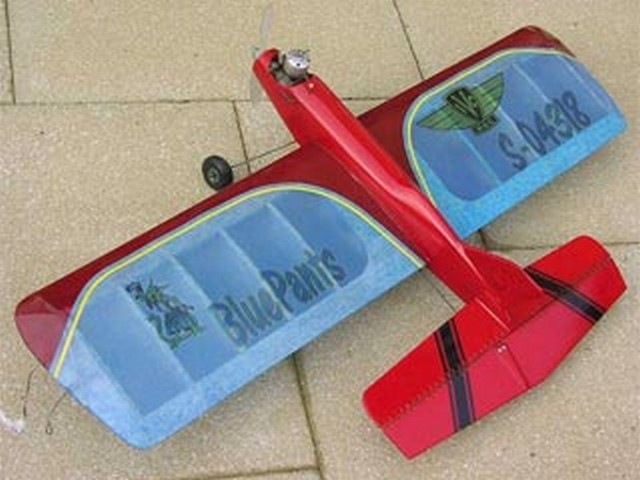 Here is a picture of my Bluepants. A fine flying model powered by an Oliver Tiger. I used it to come 4th in my first vintage competition.
MikeNelson - 10/10/2012
Hi Steve, I thought that I should mention that the tank position shown on the plan works well with an ED Racer but is too low for a front induction engine like the Oliver.
MikeNelson - 10/10/2012
Here's a couple of photos of a Blue Pants I once owned. I didn't build it, but bought it from the model shop in Godalming. I fitted a Spanish ZOM 2.5cc diesel I had as it fitted the bolt spacing in the model and therefore avoided hacking into the front end. It flew OK until I tried the first loop at which point it came in on the lines and that was that.
ChrisPinn - 07/12/2016
Added nice picture of completed model, thanks to Alf Britchford [more pics 005].
Mary - 27/05/2017
Some pictures of the Blue Pants that I built out of "Svenson" nostalgia and in honor of the Belgian Henri Stouff, world champion stunt 1954 [more pics 006-011].
JefLemmens - 10/07/2017
I am 57 and own my Blue Pants since i was 14 years old with engine 3.5cc fox (still in good condition and no crash)
i fly it two times and than stopped.
Erwin Ruelens
Belgium
Erwin Ruelens - 13/04/2021
Add a comment