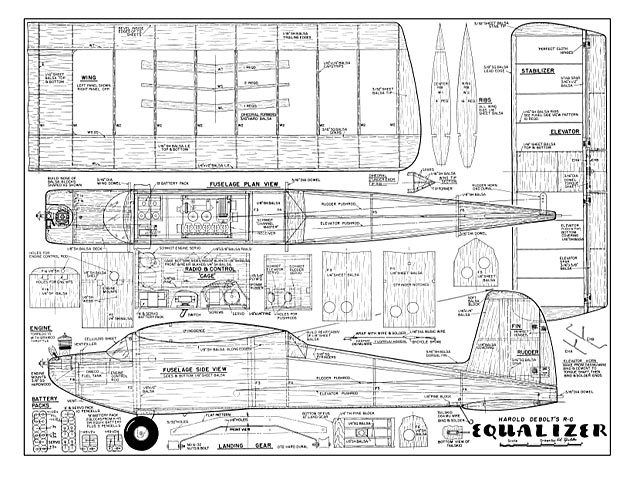 Quote: "Equalizer, you say? Tis true, performance is very close to being equal whether flying upright or inverted! Now that so called "symmetrical" models have come into their own, we can dig into the peculiarities of this sort of design. One of the main requirements, if we are to have equalized performance, is that we use a force arrangement which is close to the same both upright and inverted. With this the model's flight attitude will remain the same no matter how we fly it. Other force arrangements will allow inverted flight, etc., but the difference in the model's attitude will be so great as to make the "symmetrical" type by far the most desirable. After two years of flying this model it has proved to be one of the best approaches to the problem.

The simple answer would be just to add more wing area. However, with our "minimum" type RC designs, this just cannot be done without upsetting the careful balance which we now have. Thus, if we are to increase wing area, we must also increase the size of the rest of the model. Unfortunately, this can result in a "merry-go-round," for as we increase the model's size, we must add more weight for the structure and usually a heavier, more powerful engine. The result is that we must not only add enough area to reduce the loading at the model's original weight, but some more too for the increase in the larger model's weight. It should not be hard to see that by the time we get through with it all, we may have a model of such size that it may very well be too big to be usable by most of us.

The Equalizer is a successful attempt in the opposite direction. For this one we used the basic equipment weight needed and added to it the minimum amount of model necessary to get the desired wing loading. Actually, it was made possible as a result of experimenting with lightweight structural design. These experiments had been carried out along the lines of the inertia-mass principle. Formerly in RC design we had built the whole model rugged to withstand abnormal abuse. The experiments showed that if we removed the mass weight and concentrated our strength at points of stress we could reduce the over-all weight of the model without reducing its strength. These experiments proved very successful and of course are the means which made this particular model possible.

The wing loading aimed for was 16 oz per sq ft, which seemed a reasonable limit. We had a total equipment weight of 32 oz, Schmidt five-channel receiver with servos for rudder, elevator and engine. All this was mounted in the removable RC unit. To this we felt that an equal amount of weight would be necessary for the model, making a total of 4 lb. At 4 lb. we would need 600 sq in of area to get our 16 oz loading, which seemed within reason under the circumstances. In practice the model worked out well, weighing a total of 62 oz. and in all its many flights it proved to be close to the ultimate.

This obviously is a model for the advanced RC flier, so we will not give detailed building instructions, but rather tips and hints that could not be included otherwise. First, the choice of equipment, because of the inverted flying requirement, the writer used a five-channel type which allowed separated selective controls as well as trimmable elevator. Another choice might be one of the single-channel types which allows the use of elevators or, if you have one, a new two-channel lightweight rig can be used. The simpler equipment would have the advantage of lowering the wing loading..." 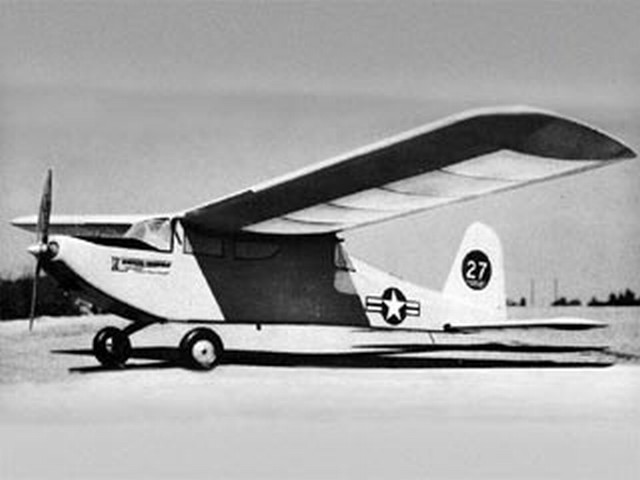 Hi Steve and Mary, Ralph B just posted four pdfs this morning of the article for the Equalizer. I combined them into one smaller pdf file [see supplementary file].
GeneRock - 07/04/2016
Add a comment