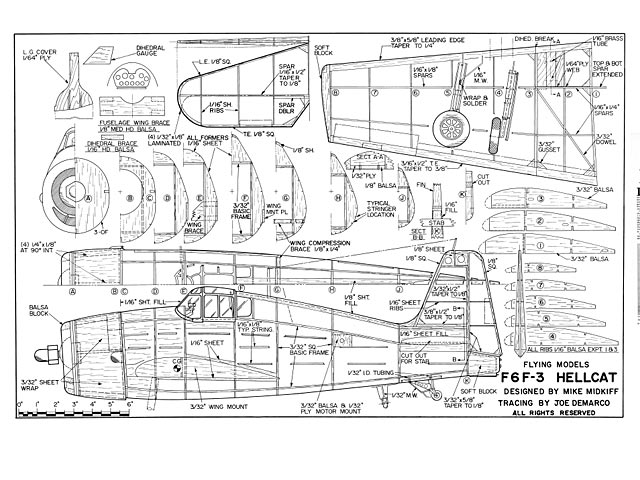 Designed specifically to combat the fast, nimble Japanese Zero after the outbreak of the war, the unsung Hellcat methodically and systematically eliminated almost all Japanese fighter opposition during the final two years of the war. Strangely enough, she never got the accolades literally heaped upon her more glamourous teammate, the F4U Corsair.

In a humble attempt to set the record straight, let's compare: Kill ratio: Corsair 12-1; Hellcat 19-1! Carrier landings: the Corsair required almost the entire war to solve carrier landing problems. The Hellcat could literally 'stall and fall' in a controlled attitude until the deck came up to hit the gear. Speed: the Corsair was marginally faster at low altitudes, but at 10,000 feet they were even and at 30,000 angels, the Hellcat pulled away.

As further proof of the F6F's basic soundness and efficiency, there were only two variants produced through the war: the F6F-3 and the F6F-5: Both models totaled 12,274 aircraft produced by war's end, which amounted to over eleven aircraft per day! Truly this was an amazing production feat and a tribute to the basic simplicity and functionality in the Hellcat's design. Perhaps the greatest tribute paid to the Hellcat was by Navy ace Gene Valencia of VF-9 who once remarked: I love this airplane so much that if it could cook, I'd marry it.

The model represents an F6F-3, which was flown by VF-1 aboard the Yorktown sometime in 1944. At 3/4 in = 1 ft scale, she is rather large as far as rubber power scale models go. Originally, my model had knock-off wings and adjustable ailerons, but I left them out of the design because little was gained to offset the added weight. I did however retain the plug-in landing gear, as this gives one the option of flying with or without the gear.

Due to the size of the model, near scale airfoil thickness is a must for the wing, stab and rudder, or she just doesn't look right. Consequently, some attention should be paid to careful wood selection to keep the weight no more than six ounces all up. I have used a semi-scale 3-bladed prop of about 11 inch diameter with satisfactory results, but a 2-bladed 12 inch diameter prop would be at least as satisfactory.

Construction notes. A model of this size and bulk requires extreme care in the selection of balsa wood to give adequate strength, yet at the same time minimum weight. With this in mind, the fuselage should be constructed as lightly as possible using hard balsa only for the 3/32 basic box framework. All other areas - formers and sheet fill-in - must be made from light balsa. The wings should employ only medium to medium light balsa for leading and trailing edge stock and all ribs. Only the spar material should be medium to hard. All balsa blocks should be hollowed out and, in addition, be of the lightest balsa possible..." 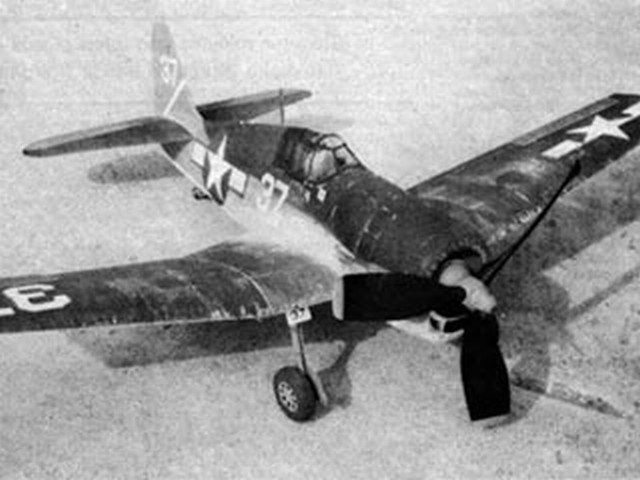