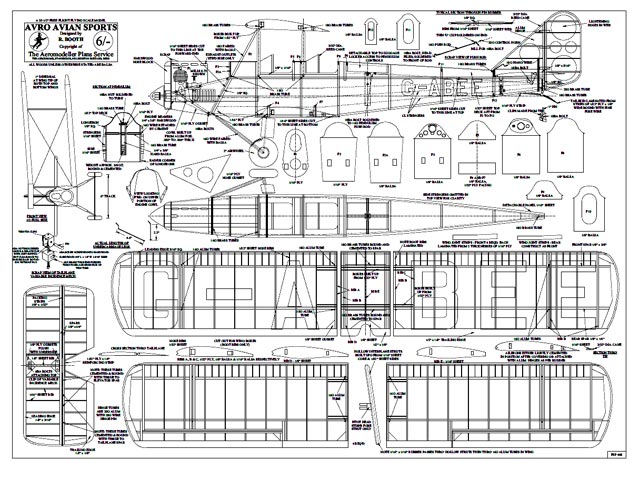 The Avian Sports was the last of the Avian series, the prototype aircraft being originally designed for the Light Aeroplane Trials at Lympne in 1926. Destined to become a serious rival to the De Havilland Moth, the Avian had many fine flights to its credit, one that springs to mind immediately being the late Bert Hinkler's record 151-day trip to Port Darwin during the early part of 1929. The time was cut to ten days by the late Sir Charles Kingsford-Smith in October, 1930 - also in an Avian.

The model is a replica of the Avian Sports originally owned by Sir Roy Hardy Dobson, Managing Director of Messrs AV Roe & Co Ltd. Readers will be interested to know the 'Gabbee', as G-ABEE is affectionately known, was acquired this year by a syndicate of five people, including Capt RE Gillmore of BEA, who is Gabbee's pilot. This syndicate had the machine repaired with the aid of parts obtained from an old Avian Mk IV. Consequently, the present-day aircraft has a few details which are not strictly Mk V version. For example, the fuselage decking is now semi-circular and not the original reflex curve type. Furthermore, when Sir Roy Dobson sold the machine in the early 'thirties to Mr AA Voorsanger, of Bramhall (Cheshire), this latter gentleman had the under-carriage changed from the original narrow track to the standard Avian split-triangulated type, which was more suitable for the average grass-covered aerodromes of pre-war days.

Seine readers may have observed from articles published in other aviation periodicals that G–ABEE was entered for the King's Cup Air Race - which should have been held last year. Several pilots who have flown the machine state that it is more pleasant to fly than the average modern light plane, and in some quarters old Gabbee was strongly tipped to be in the first three home in the King's Cup. It would have been extremely interesting to see how this twenty-year-old machine performed against its modern counterparts.

The Model. The original 'Gabbee' of 1930 was finished in black and silver - fuselage, fin, rudder and under-carriage being black, the remainder of the machine silver. However, modellers will doubtless have their own ideas on colour schemes.

The author's model was powered with the Allouchery 0.7 cc diesel (long crankshaft version), but with this engine the machine was under-powered. The writer therefore recommends the use of a 1 to 1-1/2 cc motor. Irrespective of the power plant fitted, be sure to mount the engine in such a fashion that the thrust line is off-set 2-3 degrees to starboard.

The CG should be located 1.10 in to 1.40 in aft of the leading edge of the lower wing. When the model has bean completely assembled, pack up on a table or other large flat surface until the fuselage datum is parallel with the 'ground line'. Note that the top longeron of the fuselage is not, repeat not, parallel with the datum line, and should accordingly be ignored as a rigging reference line..."

Quote: "Designed by Ray Booth this is an accurate 36 inch wingspan scale model for 0.75 to 1.5 cc engines (get the Mills out lads). The article gives a detailed description of the heritage of the original and mentions it's success in the Lympne Air Trails of 1928. In fact it really is a pretty little model and I would love to see photo's of one that someone had built (or maybe I wait until I'll retire then I can build one to escape from the rubbish on the soap box).

As always if you do decide to build from my plans take care and ensure you measure well before cutting." 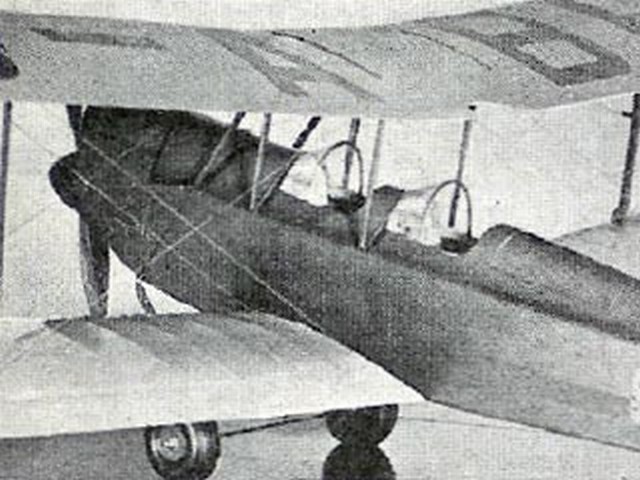