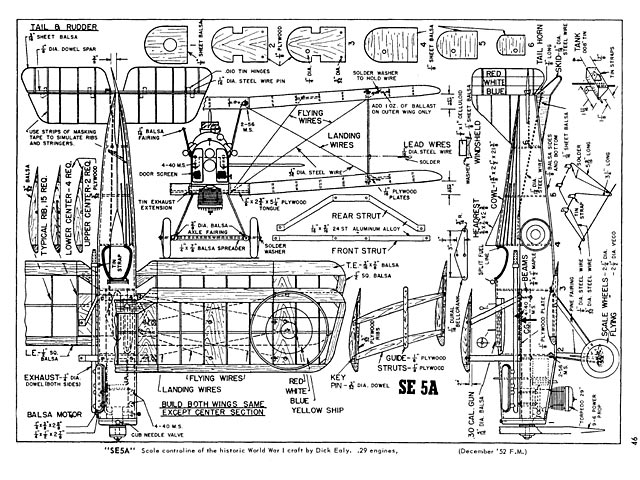 Quote: "Scale controliners will come and go but the old SE5A has a permanency all its own. This one is a standout with a .29. The SE5A, by Dick Ealy.

In the early months of 1917, Allied airmen were having a rough time. Losses of machines and pilots were terrific, and April was aptly called 'Bloody April' by England's flyers. The British were hard pressed to develop a design to cope with the Albatross, which was sweeping the skies for the Kaiser. The answer finally came with the introduction of the SE5A - a gallant old war bird which carried the brunt of the air war from late '17 to early '18.

The SE5A makes an easy-to-build scale model. Though boxy, it still has trim lines. The original was built 1-1/10 in to 1 ft scale and powered by a Torpedo .29 which gave it a 65 to 70 mph speed. This model incorporates the use of real flying wire rigging, designed by Walt Farrel who built the ship. It makes a stronger set of wings and is more truly a scale model. When standing on the outside of the circle you can hear the wires whistling as the model passes.

FUSELAGE: After scaling up the plans to full size, cut out the 118 hard sheet balsa sides. Allow an extra 1/8 more onthe rear end for bending. Cement the 3/8 by 1/2 maple motor beams on the sides. Then set the sides of the fuselage upright and cement in plywood bulkheads 2 and 3 in their respective posi-tions. Cement the 1/2 in sheet balsa nose block on the front. When the cement is dry, pull and cement the rear ends together and attach the remaining balsa bulkheads in place. We used Testor's B cement on the entire ship.

Bend up the landing gear from one piece of 3/32 steel wire as shown. Solder the 1/8 steel wire axle in place. Wrap four 3/8 by 1-1/8 tin straps on the top and drill 3/32 holes in each strap. Solder them in place to match the holes in bulkheads 2 and 3. Attach the gear to the bulkheads with 2-56 machine screws.

TAIL: Cut the horizontal tail outline from hard 3/16 sheet balsa and sand to a streamlined section. Now remove the 3/16 strip across the tail and cement a 1/8 dowel spar to the rear elevators only. Tin hinges are made of strips 1/4 by 1 in, bent around a 1/16 steel wire pin. Make a tin tailhorn of the wrap-around-spar type with a 7/8 leverage. Cement it on the right side as shown. Do not use a smaller leverage as it will be too sen-sitive on a 1/2 horn.

Force the hinges into the dowel and balsa, making sure the elevators move freely. Put a little cement on the hinges when pushing them in place. Cement the tail to the top of the fuselage at zero incidence. Bend a 1/16 steel wire push-rod to fit, and hook up the bellcrank to the tailhorn. Now carve out the tip fuselage cowl..." 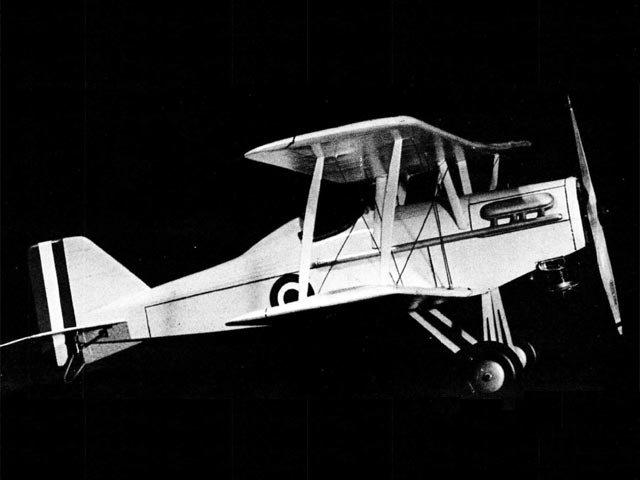