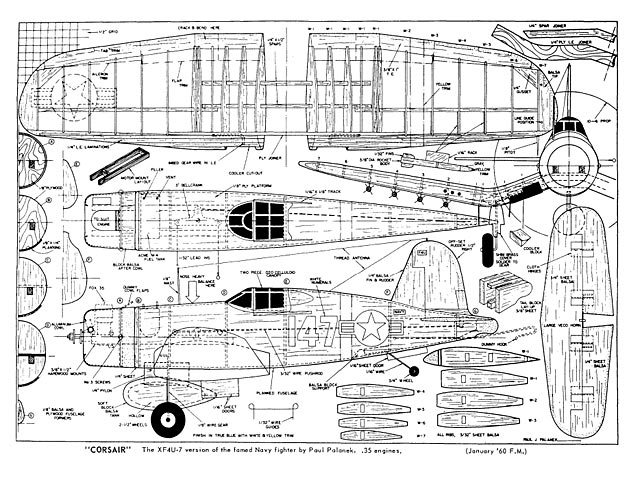 The XF4U-7 prototype 'Corsair' was first flown in 1940, the last Corsair to be built - an F4U-7 our model, was delivered in mid-February, 1953. During this span of time some 12,571 machines were built not mentioning those built under contract by the Goodyear Corp using the FG designation.

This ship was a big powerful bird with most distinctive features. Its inverted gull wing allowed a more rigid landing structure also allowing a large three blade prop. The cowling housed a Pratt and Whitney 2,100 hp engine. Its top speed was in the neighborhood of 470 mph, coupled with an extremely low landing speed to make carrier landings less hairy. Navy and Marine fliers had nothing but nice words for this excellent aircraft. With its superb performance and in the hands of our most capable Navy pilots, the Corsair did more than help to clean up the mess in the Pacific.

Few years after World War II, this ship, piloted by Cook Cleland, was again to add a few more ribbons to its already colorful career. He purchased and flew a Goodyear built-FG-ID Corsair in the 1946 Thompson, finishing 6th. In late 1946 he purchased and modified for racing three Vought designed, Goodyear built F26-1 Navy fighters, the world's most powerful piston-engine fighters.

Winning the piston-engine division of the Thompson trophy in 1947 and 1949 and setting new speed records both times, Cook became the only pilot other than Roscoe Turner to win the coveted trophy more than once. His 1949 speed will probably be regarded as the fastest in history for closed-course, piston-engine racing. Cleland's modifications consisted of installing a water-alcohol injector system to his Wasp Major engine, boosting power to over 4000 hp. Also, some 7 inches of span was sheered off each tip to further increase speed.

Our model design can be considered semi-scale since we wanted a ship not only to look scale but to have superb flying characteristics. We took certain liberties here and there to simplify and keep the structure as light as possible. As things turned out the ship is a demon on wires (70 ft) with the Fox .35 being more than ample power.

Most of the structure is somewhat routine, cut and dried. About the most complex structure is the gull wing, though when studied carefully this too takes on simplicity. The cowl may prove difficult to acquire. If a problem, try an aluminum pot, the type you can pick up in the 5 & 10c stores. In the construction of the model, we would suggest beginning with the wing.

Wing construction starts with the spars, leading edges, and plywood rinforcements. To lessen the cost of this structure, use 1/4 in laminations of sheet balsa for the leading edge. When it has dried, shape and taper as shown. The leading edge is backed up with 1/4 in plywood sheet spanning the distance from W-3 to W-3. Prior to cementing...". 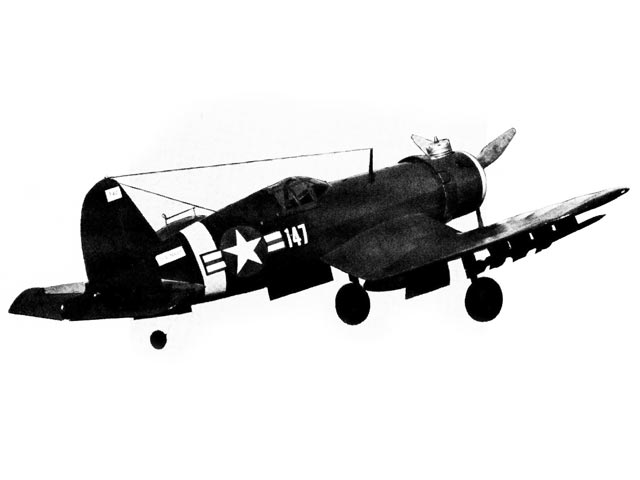