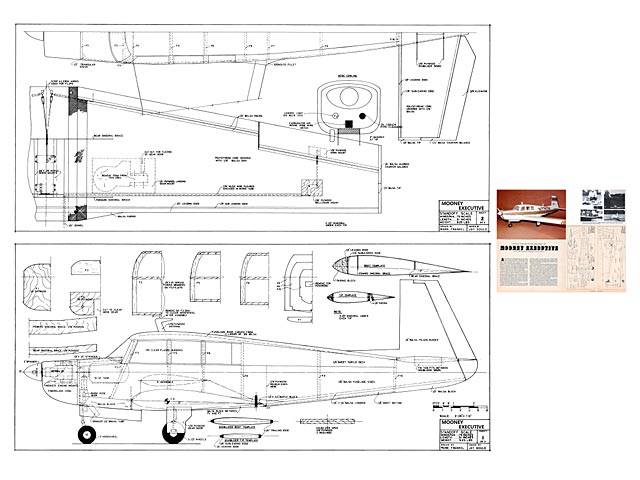 Quote: "Story by Mark Frankel and photography by James Lipschutz

I chose to model the Mooney Executive partially because of its lengthened fuselage. About four years ago I built a stand-off scale Mark 21. The model was originally intended to be a test platform for a new set of mechanical retracts. At the time, retracts were just approaching their current refinement and most retract experience was confined to relatively light pattern models. I was curious to determine how these retracts would hold up in a heavier scale type model. Rather than test the retracts in a marginally flyable 'serious' scale model, I chose to build the Mark 21 with only cursory reference to the full-size Mooney's dimensions. The model employed the areas and moments found on several popular pattern aircraft. Its shapes were copied from photographs rather than three-view drawings.

The Mark 21 flew reasonably well with one exception - it fish-tailed noticeably, even in the slightest breeze. Since the fin area seemed generous, I reasoned that the tail moment must have been too short. So I decided to build a second Mooney with increased fuselage length - thus the Executive. This second Mooney was to employ Rhom retracts since the mechanical nose gear proved inadequate for the large model. It would collapse upon landing unless a perfect nose-high touchdown was executed.

It was fortunate that I started the second model when I did because the first was about to become a source of parts for the second. During a particularly gusty flying session I ran out of fuel while upwind of the runway. I was in perfect position for an easy deadstick landing; however, I was suffering from extreme overconfidence at the time. I allowed the model to glide too far downwind for a breathtaking 'center-of-the-runway' landing. Upon realizing this, I made the classic mistake of entering a steep turn while trying to extend the glide. Of course, there was insufficient altitude to recover from the resulting spin, but there was plenty of altitude to insure the model's total devastation. Maybe washout in the wing could have prevented that lightning fast stall-spin. However, it was too late to try washout in the second Mooney since the wing was already completed. Washout was an idea that would be saved for the third Mooney.

The second Mooney (the first Executive) turned out considerably overweight. This was aggravated by the addition of lead weight in the cowl to off-set the Executive's tail-heavy condition. This tail heaviness was eliminated in later models by the use of lighter wood. Notwithstanding the Executive's 11-pound flying weight, it performed well and the Rhom landing gear proved more than equal to the task. In fact, I remember a landing on a hard surfaced runway that should have demolished the gear but the Rhoms were unaffected. During this particular landing, which was made in gusty conditions, I lowered the model's nose to regain some speed lost to an earlier gust when suddenly the model encountered another gust. The model had about 10 feet of altitude and it was in a slight nose-down altitude. The gust literally slammed the Executive onto the runway, nose gear first. Just before impact I was certain that the gear would fold, however, it didn't. In fact, the prop wasn't even nicked. That landing sold me on the utility of Rhom retracts in heavy models.

The first Executive continued to fly for almost a year until the fatal flight when I managed to shear the stab off during a very tight turn. The stabilizer, which the Executive inherited from the Mark 21, was a mere 1/4 in balsa slab, notched to receive the fin. Apparently, the notch removed most of the stab's strength, as it folded with a loud crack that could be heard over the screaming Webra. The Executive arced majestically into a 90° dive that resulted in a half hour search to find all the salvageable parts.

Mooney number three acquired an airfoiled stabilizer with spars to insure it's strength. In addition, I had received a set of Executive three-view drawings and I decided to make the model's outline conform more to scale. Surprisingly, my 'eyeball' plans for the two previous Mooneys were very close to a 2-1/4-inch scale. A slight change in wing taper and aileron cord was about all that was needed for more realism. I elected to retain the fuselage width used on the previous Mooneys. This remains one of the major deviations from scale, as the fuselage is approximately 1-1/2 in narrower than scale. But this violation is difficult, if not impossible, to detect without a ruler. The Executive also employed two degrees of washout in each wingtip to prevent tip stalling at low airspeeds. The washout proved effective, allowing landings at a much lower airspeed than the earlier models. With this third Mooney, I was satisfied that no further improvements would be needed. The model flew extremely well with no noticeable flaws and it was built in approximately the same amount of time required for a competition pattern model. Furthermore, its appearance was authentic enough to cause several modelers and full-sized pilots to believe that it was a 'serious' attempt at scale.

Currently, the second and third Executives are flying and I am tempted to build another with full cabin and surface detail just to bring Dave Platt, Maxey Hester, and Claude McCullough to their knees.

Fuselage construction. The fuselage is begun by preparation of the basic sides. These rae cut from medium weight 1/8 in balsa and laminated with contact cement to the 1/16 ply doublers..." 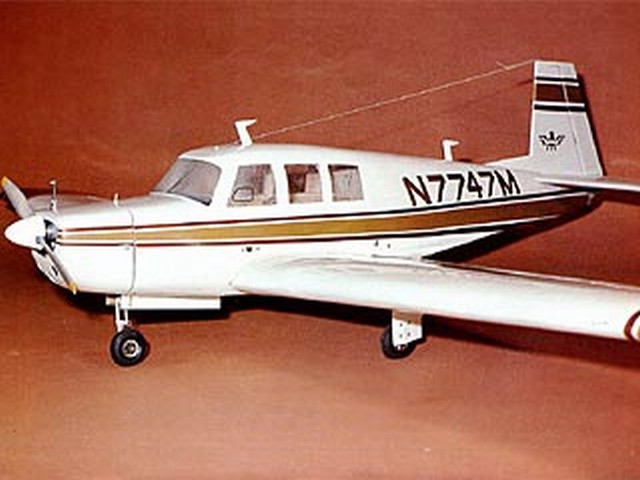