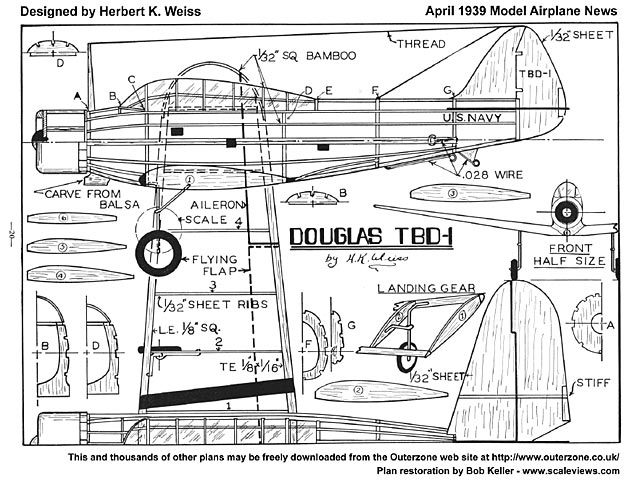 Quote: "A Realistic Model of a New US Navy Plane - Fine Performance Is Combined With Simple Construction. The Douglas Torpedo Bomber, by Herert K Weiss.

ONE of the latest of the Navy's sleek torpedo planes is the Douglas TBD-1. Flying under a double classification, the TBD-1 carries either bombs or a torpedo at an estimated top speed of 235 mph. Since the ship will be used aboard carriers, space is an important factor, and the wings of the TBD-1 fold up and in on themselves from a chord about mid-way to the tip. The experimental version of the torpedo-bomber had a straight cockpit housing, but the accepted version has had the housing humped, probably to accommodate the directional loop of a radio antenna. The engine is a Twin Wasp of 850 horsepower.

Because of the comparatively small size of the model, there are certain points which most be stressed in construction. They are as follows:

Sand the fuzz off all balsa used in the model before using it; the frame will be lighter, cleaner and stronger. Use plenty of cement; the small additional weight is negligible against the gain in ruggedness and freedom from warping. Keep the tail of the model light; every weight you put on the nose for balance will mean just that much more weight that the ship has to carry, and it's a small ship! And remember, a little mistake on a small ship is equivalent to a pretty big one on a large model.

Wings and Tail. Make the wing first, as it's used as a jig for the fuselage. The frame can be assembled on the plan. if the left wing panel is traced on another sheet of pa-per and pinned down in its proper place. The wing is built in one piece. Put waxed paper over the plan, pin the lead-ing and trailing edge in place, and add the ribs and wing tip. Use plenty of cement. The bamboo for the wing tip can be bent over a flame, or, as it is very thin, it will bend easily without heating and can be tied in place with silk thread while the cement is drying.

When the frame is dry remove it from the waxed paper and with a razor blade cut loose surplus cement and any waxed paper which may have adhered. Crack the spars just outside rib 1 and give the wing 3/4 in dihedral at each tip. Re-cement the spars, and when the cement is dry shape the leading and trailing edge to airfoil shape with a razor and sandpaper..."

Quote: "Here is a PDF format plan and the accompanying article for a 12-3/4" rubber-powered scale model of the Douglas TBD-1 Torpedo Bomber designed by Herbert K. Weiss and published in the April 1939 issue of Model Airplane News." 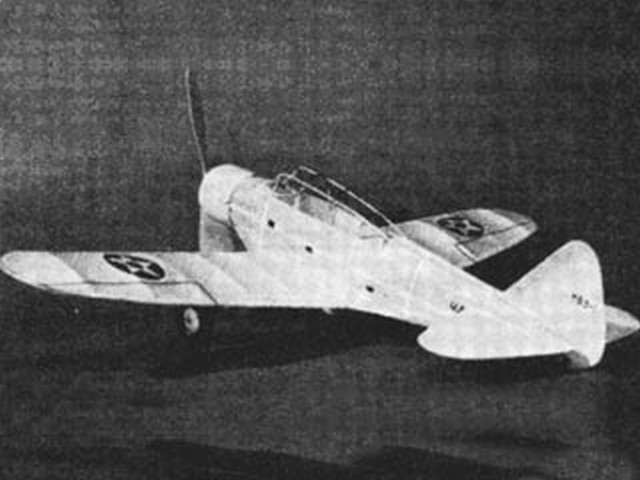