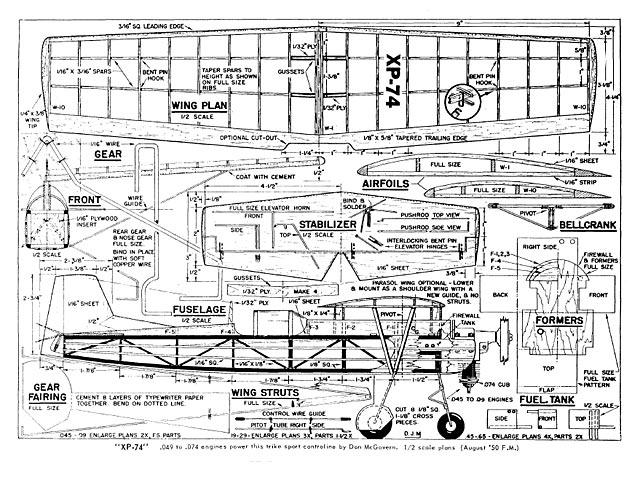 Quote: "3-1/2 minutes For the wingplan, 4-1/2 minutes for the fuselage - that's all the time it takes to en-large the plans to build this unusual Class A control-line model! Just Follow the simple instructions! XP-74, by Don McGovern.

'X' for Experimental, 'P' for parasol wing, and 74 for engine displacement (okay, so the engine is an .074 Cub - so what?) . Oh, well, it makes more sense than most names dubbed on model planes, doesn't it?

No, we haven't given you complete full-size plans for this ship - for very good reasons! We want to give you an opportunity to learn how to enlarge plans from reduced scale drawings - to prove to you that there is nothing complicated or mysterious or technical about this phase of model building. And once you know how to scale up plans, you can go ahead and construct those big ships on which space limitations make it necessary to show reduced-scale plans - such as the 'Miss FM 1950' on Pages 14 and 15 of this issue. So be patient with us for a moment or two - try your luck at enlarging the plans for the XP-74 and join the ranks of the so-called 'experts' of model aviation!

HERE'S HOW TO SCALE UP PLANS: A first glance at the plans given on page 18 will probably give you the shudders - how can anyone expect an ordinary model builder to build a plane from a conglomeration like that? But, let's take a second look!

You'll notice that all formers, wire parts, airfoil sections and essential pat-terns have been drawn full size. That leaves only the plans for the wing, stabilizer and fuselage to be enlarged. Still too hard? Give us a few more minutes of your time!

The wing is drawn 1/2 scale - half the size of the plan you need to actually build it. All you have to do is to enlarge half of the wing to its full size - the other half can be obtained by flopping over your finished plan for the opposite panel.

Ready for the enlarging operation? You'll note that the length of one wing panel is 9 inch (by laying a ruler on the plans you'll see that the panel is shown half size at 4-1/2 in from the center line to the wing tip). The width is 4-1/4 in at its widest point (2-1/8 in on the half-size plans). So draw a rectangle on a thin piece of paper, making it 9 in long by 4-1/4 in wide. Then, in similar fashion, measure off the spaces between each rib and rule in rib positions on your plans - following along as shown in Figure 1 until the entire wing pattern has been completed.

Next, tackle the fuselage side structure plan (shown in solid black) in a like manner. If you follow the tips shown in Figure 1, you should go through this entire operation like a breeze.

As the formers are shown full-size on the plans, no top view is necessary. Eight 1-1/8 in long strips of 1/8 square balsa, cemented between the front four uprights of the fuselage sides, will give you the proper width for your fuselage. After they've dried, you simply pull the sides together at the tailpost and add cross pieces cut to fit the remaining three positions..." 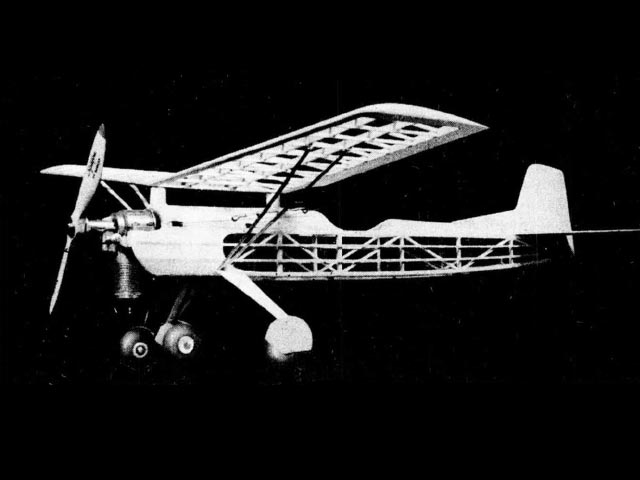