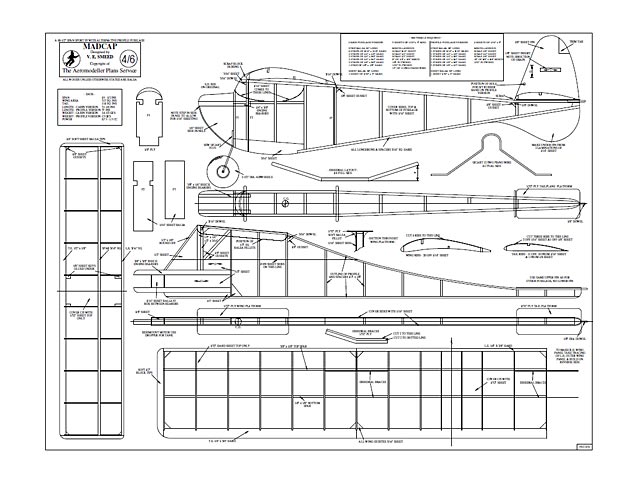 It is no exaggeration to say that in designing the Tomboy (oz285) Vic Smeed has already done a signal service to beginners in particular and modellers in general. Here we have a model which (for a power job) is very easy to build, relatively good looking, and so easy to trim and fly that to date nine Tomboys have been lost OOS on their maiden flights. It was this last fact that set me thinking, for Tomboy is such a lively little flier that one never knows where the next flight is going to end up. So Vic was approached about a new design, the specifications being for a bigger, heavier model than the Tomboy, which when slightly underpowered by an ED Bee, would have a slow, gradual climb with reasonable hopes of ending up quite close to the take-off point even after a long engine run. And most important of all, the model was to be so strongly built that a 'head-on' with a brick wall would only necessitate a spot of pointing on the wall by way of repairs!

At last, about six months ago, the plans for Madcap arrived and I set to work. It is almost monotonous the way Vic's models behave, for just as with Tomboy, the first trial hand glide with Madcap was a perfect dream, and in flights under power the model more than lived up to expectations. In fact on the second day out it glided full tilt into the granite wall of a local cottage, and the only damage sustained was the dislodging of two small bits of fairing. I'm afraid I forgot to examine the wall!

Building the Madcap. You will find this a longer and somewhat more difficult job than was the case with the Tomboy, April, 1952 but since the present model is calculated to give many seasons of trouble-free sport flying, it is well worth a little extra time and care. The trickiest part of the job is undoubtedly the undercambered sheeted-in wing, so we will deal with that first and in detail.

The Wing. Start by tracing the four dihedral keepers on to plywood and cut them out. Then piece together the 1/8 x 1/4 in bottom spar, cutting the joints neatly to shape as shown in Fig.1. Cement the spar into a single unit with the ply keepers across the joints.

Trace and cut out two key ribs from 1/16 in ply, and use pins to sandwich 20 rectangles of hard 1/16 in sheet balsa between them to make the set of ribs. Care should be taken to see that the top of the ribs forward of the upper spar slot is 1/16 in lower than the rest, so as to leave room for the LE sheeting, while the tops of the four central ribs must have 1/16 in taken off all the way along, for here the sheeting extends all the way from the LE to the TE..."

Quote: "Presented in the April 1952 Aeromodeller was the Madcap, a functional plane from the pen of Vic Smeed. It is rugged free flight sports plane for 1cc motors. It would be a good successor for the Tomboy but somehow doesn't seem to have made the grade. The cabin fuselage has some pretty lines, if a bit deep - you could certainly hide some radio gear in there without any problems. It was also presented with a profile pylon fuselage if that rocks your boat, but not for me personally. As with all my drawings please enjoy them and if you build from them measure at least twice before applying the knife." 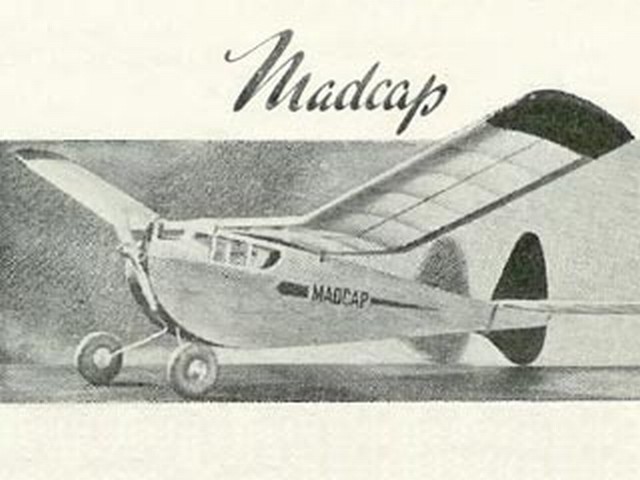