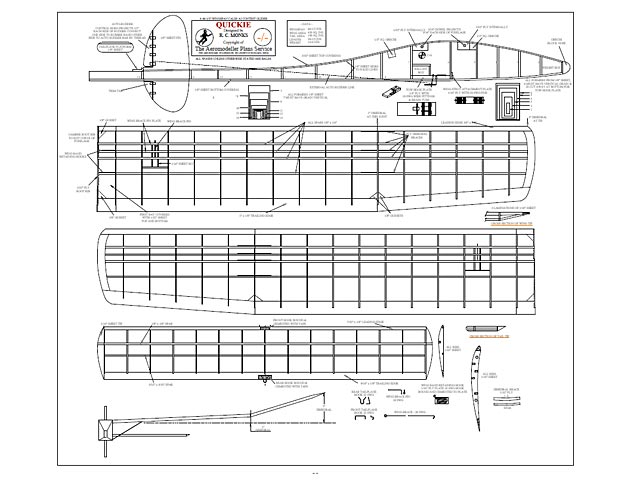 Quote: "HERE'S a sailplane that thousands of our readers have been waiting for. You can build it directly 'out of the magazine' from full-size parts and dimensions by following the stage by stage instructions. Then, when the Quickie is complete and ready for test, you have designer Ray Monk's own trimming hints to help, and what is more, you'll have a duplicate of the A/2 sailplane that only just narrowly missed winning the International event in Yugoslavia last season.

Quickie Number 1 was built in February, 1951, and passed through the first two A/2 eliminators with an average of over three minutes for the five flights registered. Quickie Number 2, with one-piece tissue covered wing, averaged 4:37 to place fourth in the A/2 final trials at Dighy. Selected to represent England in the UK Challenge match, Quickie Number 2 also gained a third place in the glider section later in the year.

In the meantime, Number 3 had been built especially for the major event, the International A/2 contest at Lesce Bled in Yugoslavia, and with an all-sheet top surface to the wings. After a perfect double-maximum performance in the first two rounds of this important contest, Quickie led the field and was well set for the cup. An unfortunate series of downdraughts reduced the final position to fourth place; but Quickie had already made its name as an A/2 of the highest efficiency. The average attained in this major contest was 4:11, bringing the average for the whole season in all kinds of weather, to 3 min 20 secs - no mean performance for a job that can be built in a week of evenings!

The version presented here is Ray's latest, the tissue covered two-piece wings braced by a rigid wire strut, are completely shock-proof, and less susceptible to warps than the all-sheet type. All set to start construction?

CONSTRUCTION. Fuselage: Transfer the full-size bulkhead shapes on to 1/8 sheet balsa as economically as possible, and cut out Nos 1-15. Grain direction is not important, except with Nos 6 and 7, where grain should be vertical. Select two evenly matched 1/8 sheets, and mark one edge of each with the fuselage dimensions. Transfer the nose contour from the full-size plan, using the base line to coincide with the edge of the sheet. Ifor the upper fuselage line, use each bulkhead at its correct station to obtain the correct depth of the side. Connect the points with a curve or piece of hardwood bent to shape, and cut out two similar sides..."

Quote: "The Quickie was first published in the Aeromodeller of March 1952. It was designed as an A2 model by Ray Monks and achieved some outstanding results in competitions, even performing well internationally. The unusual thing about this sailplane, however, is that it is delightfully simple to build. That easy in fact that the plans were presented as a number of scale yourself drawings. I have done all the hard work and scaled them and present then in the plan format we are all familiar with. As with all my drawings please enjoy them and if you build from them measure at least twice before applying the knife." 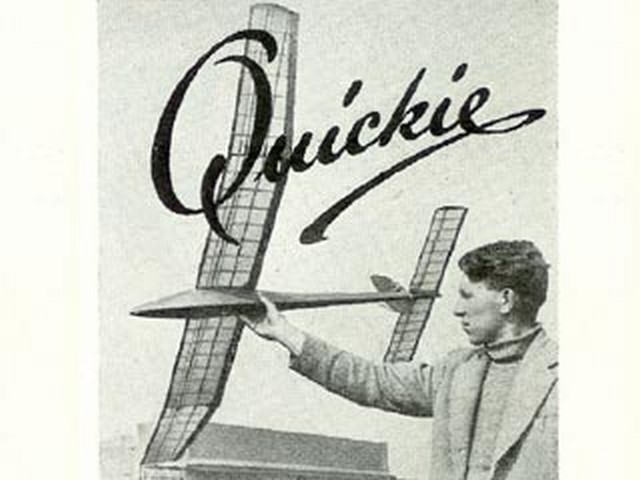