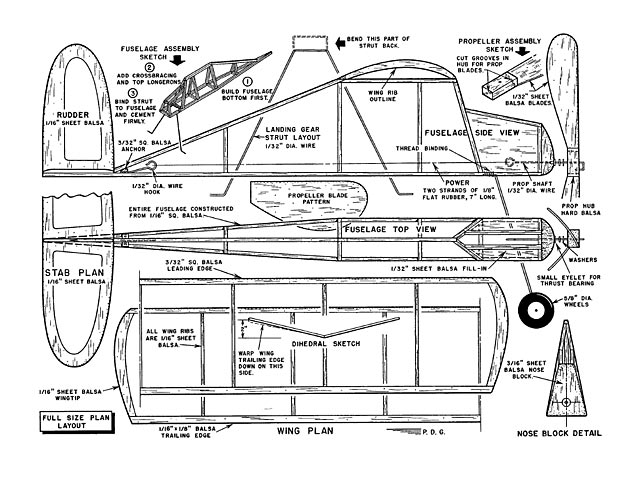 Quote: "Flying fields, airship docks? Who cares? You can put this mighty midget through paces without leaving your chair! Parlor Fly, by Arthur Silberburg.

I had good reason for building the 'Parlor Fly' and I'd like you to know about it, too. It seems that whenever the relatives are over to the house, and admire the balsa handiwork, there is usually a remark that sounds like this; Let's see one of those big things fly. You have enough room in the backyard!

Then, you have to go through a long-winded explanation on why you can't and how they'll just have to be satisfied with a visual inspection. So that's the reason for the Parlor Fly. I wanted something I could fly around the parlor. Not only does it delight the visitors but I've found I had loads of fun with it myself.

Needless to say, the simplicity of the construction per-mits both the beginner and accomplished, to finish it in about two days spare time, or three to four hours building time. The building instructions follow:

First assemble all the material needed. Use a good grade of balsa and the 1/16 strips should be quite firm. Lay out bottom crutch of fuselage on bench over wax paper, and build right on top of it. While waiting for that to dry, cement together the rudder. Next fashion the landing gear, rubber-band hooks, noseplug, propeller and wing ribs. When fuselage and rudder are dry, remove and lay out elevator and half of wing. The elevator is cut out of sheet balsa, but the wing is pinned to the bench. Place wax paper underneath. While waiting, cover rudder - one side only. Cement landing gear and rear hook to body.

The propeller blades are curved by putting a thin layer of cement on the side that is to be the inside curve. Cement hook and nose plug in place, reinforce it on both, sides of the neck with 1/16 sheet. Cement nose plug lightly to body, for it may have to be removed to replace rubber motor. Rubber motor should be made from two 1/16 square, 1-1/2 in long rubber bands (the desk type). Now you can cover the elevator on the top side only. Rudder is now tack cemented to elevator in front only, to permit bending to correct adjustment.

Construct the other half of wing and while this is drying, cover fuselage and cement tail assembly to it. Put wheels on landing gear and bend ends up to retain wheels. While half of wing is still affixed to plane while drying, place second half at desired dihedral and cement in place. Cover wings when cement is dry. NEVER wet tissue on wings or tail assembly - just fuselage. Do not dope covering as plane will bend like a pretwl. Cement wing on body, making sure it is setting straight. If instructions and plans were followed, the plane should balance properly.

Test glide it, with the rudder straight and wing unwarped. Although adjustments should not be needed, if it is necessary put a 1/16 square in between the fuselage and leading edge of wing to increase lift to stop model from diving. If model stalls, cement weight to nose for a smooth glide.

If the plane is to be flown in a large room, then the direction of flight can be to the left. This will give a straight glide. If it is to be a small room performer, it is best to fly it to the right. Offset rudder to right and warp up frost edge at top of right wing.

From there on, it is trial and error. Even after you have it adjusted for sometime, you will still keep fiddling for a more accurate flight performance. That's what maintains your interest. For best results the flight pattern should be a fairly low take-off, about waist level. The plane should climb to ceiling level and then lose altitude. With no obstacles in the flight path you should almost be guaranteed four circles; with good adjustment you should be able to pull out eight to ten circles." 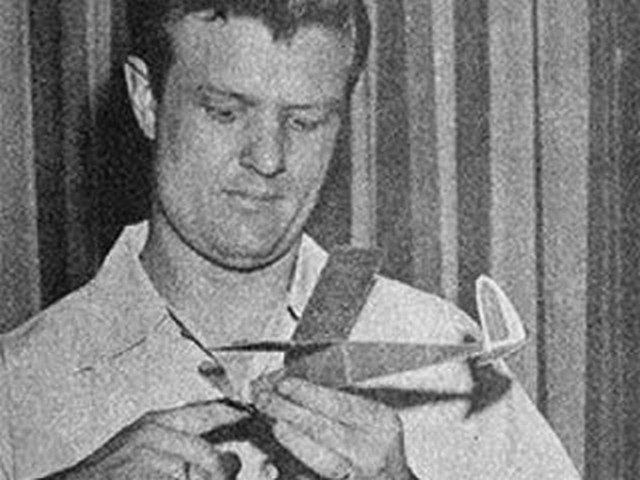