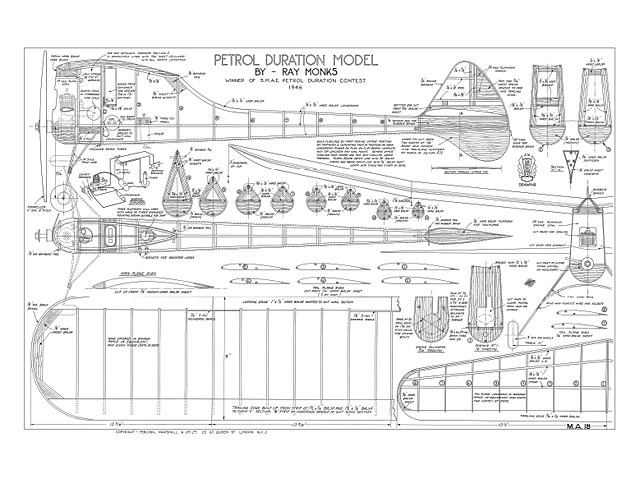 Petrol Duration Model (1946). Designed by Ray Monks, who won one of the earliest SMAE IC duration contests with this model in 1946. Scanned & enlarged from Model Aircraft, Feb 1947.

THIS model distinguished itself by winning the SMAE Petrol Duration Contest, held at Leicester, on September 15, 1946. Considering that the model was designed and built by Ray Monks during a spell of ten days' leave from his army duties, and was flown in the contest practically straight off the drawing board, its performance in winning the contest in the rough weather which prevailed was remarkable, and singles it out as an exceptionally sound design.

Performances which it has made since the contest bear out its early promise, and the design is offered to those of our readers who desire to build a sound high-performance machine for competition, which is yet straightforward in construction, with every confidence.

The Fuselage: This is built up on three longerons (two on the datum line) and a backbone, with formers at intervals to maintain the contour of the balsa sheet covering.

The method employed for construction is to make up the tops of the formers (triangular portions) and cement them to the main longerons, on a perfectly flat board, in their correct locations. The backbone, which is in two pieces, is then fitted in position, together with the members forming the wing support, before lifting the structure from the building board.

The semi-circular bottom formers are now cemented in position and the whole fuselage planked with 1/16 medium hard balsa sheet commencing with the underside, which is planked with strips up to the main longerons. Note that the under fin is formed integral with the fuselage from two sheets of hard balsa which fair into the tailplane platform.

For ease of construction the interior fitments, such as the coil, condenser, battery box, timers, and booster plugs, should be fitted after the bottom has been planked but before planking the upper portion.

Any good timer will do, but the mounting must be modified to suit the timer you select. The mounting shown suits a Snip Deluxe lightweight timer.

It should also be noted that the entire fuselage between formers 1 and 2 is lined with celluloid 1/32 thick, to prevent the ingress of petrol and oil into the rear of the fuselage. A good point this! The lining should be fitted before the planking of the upper portion of the fuselage is carried out, not forgetting to fit drain tubes at the bottom, and that the top is left open at the wing mounting platform to provide access to the compartment when necessary.

The battery box consists of layers of stiff brown paper strip wrapped and glued together, using a battery as a former. Remember batteries vary somewhat in size, so do not wrap too tightly. The batteries recommended are either of the following : 630, 631, 730 or 731 . When thoroughly dry the paper battery box is cemented to No.2 former, as shown in the drawing.

The condenser is also mounted on No.2 former, to which it is attached by suitable clips according to its type. The coil is bound in position on to two cross members in the bay between formers 2 and 3. These should be of hardwood.

When all interior fittings are properly in place on the front fuselage bay and the celluloid lining is properly fitted and petrol tight, the planking of the upper half of the fuselage can be undertaken..."