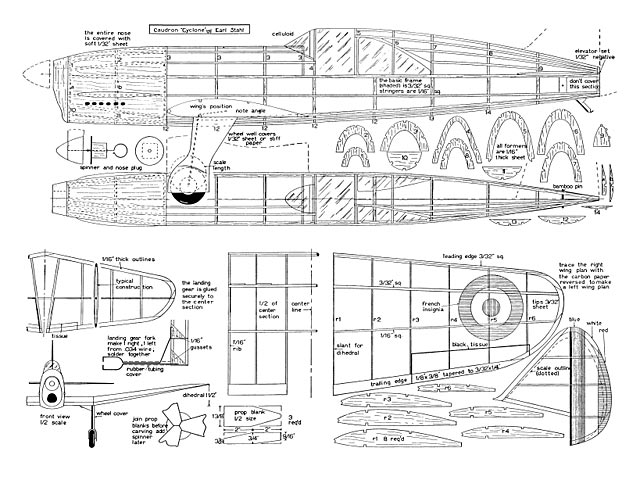 Quote: "Build and Fly The Caudron War Plane, by Earl Stahl. An Exact Scale Model of One of France's Latest Fighters That Combines Realistic Appearance With Fine Performance .

WAR has again come to Europe and as in the last great conflict, the airplane is destined to play a major hand in this ghastly game of destruction. Production of all types of planes has been speeded to a dizzy pace and unknown numbers of new designs are being developed for the purpose of destroying lives and property.

In France the Caudron firm has just recently produced a new lightweight pursuit plane, which is most remarkable. Applying the knowledge gleaned from its numerous racing planes, the most famous of which is the winner of the 1936 Thompson Trophy race, a high performance, low cost fighter has been developed. The model C-713, known as the 'Cyclone' is an all wood low-wing monoplane powered with an inverted twelve cylinder Renault engine which develops 450 horsepower. And it seems that the Cauldron engineers have not forgot the formula for getting high speed with low power, since the maximum speed with full load is over 300 miles per hour. Most unusual is the fact that the wing's 29-foot is only one foot more than the overall length. That this plane will see much service at the 'front' seems assured since reports, indicate that it is comparatively easy to fly - just the thing for pilots hastily trained in wartime schools.

Our model is a faithful reproduction of the real plane - and it seems to inherit some of its speed, too. Because of its attractive appearance and flight ability, it will be a worthy addition to your fleet. However, a word of caution before beginning the construction: For maximum flight performance it is necessary to make the model as light as possible while still retaining the required strength, so select all materials carefully. Firmly fix the method of construction in mind before starting to work and, finally, make the structure as accurate as possible.

Wing: Start the construction by cutting the wing ribs from sheet balsa. Two ribs of each type are needed with the exception of R-1 of which eight are required. Two of the R-1 ribs are cut from 1/16 sheet, and all others are cut from 1/32 sheet balsa. Sandpaper all the ribs smooth and cut the notches for the spars. The wing is built in three individual pieces: the center section and the right and left panels. Make a complete center section plan and build directly atop it, using very hard spars in this unit since they must carry the shock of landings. Taper the outer trailing edges as noted on the plan. Spars of the outer wings are medium - grade wood. Trace the wing tip pieces on 3/32 sheet and cut out. Complete the wing by trimming the tips and leading edges, finally sandpapering lightly.

Fuselage: A rectangular frame forms the base of the fuselage structure. 3/32 square medium - grade strips are used to make this frame, which is shown lightly shaded on the plan. Build the two sides first, one over the other so they will be identical and then join them together with 3/32 square cross pieces as shown by the top view.

The fuselage formers are cut from 1/16 thick sheet, and in the interest of greater strength it would be best if they were cut from a sheet of laminated balsa with the grain crossed. Accurately mark the position of the notches, but don't cut them out until it is certain that the stringers won't be pulled from their natural positions. Cement the formers in place and add the 1/16 square stringers. The one stringer running back on each side is cemented directly to the underframe. Since the top cross - pieces of the basic frame will interfere with the rubber motor; it will be necessary to remove them at this time. Use a razor-blade and cut each cross-piece off flush with the inner edge of each former.

The entire nose, forward of the leading edge of the wing, is covered with sheet balsa. Because of it's somewhat difficult shape it will be necessary to use numerous strips of soft 1/32 balsa for this job. Start at the top and plank the nose carefully..." 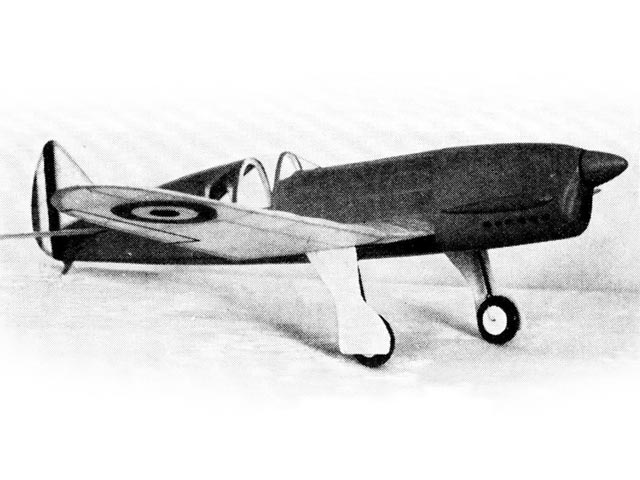