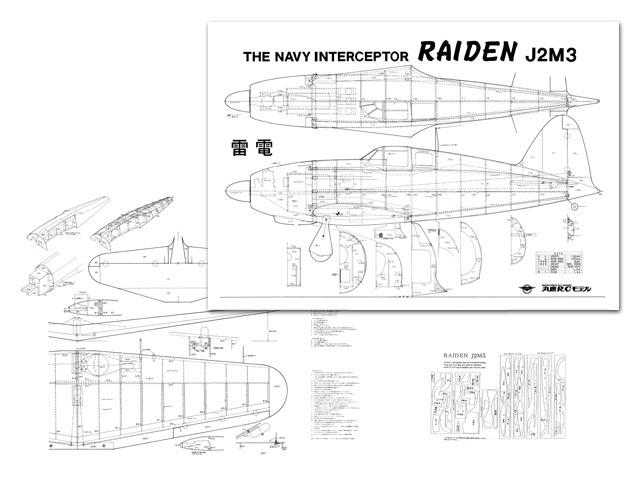 MITSUBISHI's Raiden (Type J2M3, known by the Allies as 'Jack') was specially designed and built as an interceptor to defend the Japanese homeland from high-flying Allied bombers. It had, however, many early development problems and engines for this aircraft were in short supply, resulting in less than 500 being built. The kit builds into a very good 50 in wingspan replica of this aircraft, and is designed for high power .25 to .40 engines.

The kit comes in a sturdy box which provided adequate protection for the contents. On unpacking the kit, the first item that could not be missed was the large spun aluminium cowl, which occupied at least one third of the entire box! The remaining parts of the kit were made up from die-cut lightweight plywood and balsa sheet, sheet balsa for wing and fuselage skinning packs of bandsawn parts for tailplane construction and wingtips. etc, all wood selection being first class. The hardware pack appeared sparse, containing only the aileron links, tailplane link and the required undercarriage clamps and legs, plus two small metal bolts for wing fixing.

The kit is completed by a very nice canopy, a well drawn set of plans and self-adhesive decals. No fuel tank or items such as control linkages and hinges are provided in this kit.

Construction: Before any construction was commenced I had a good long look at the plans. It was clear that the plans did contain basic instructions, but as these were in Japanese I could only be guided by scanning through them, finding the part reference numbers and following them in what I hoped would be the correct sequence, although this was greatly eased by the well drawn illustrations on the plans.

I started on the fuselage, removing all the formers from the excellent die-cut sheets, and marking them using the identification sheet provided. The fuselage framework is built in two halves on separate frames which when joined, form a very round and somewhat stubby fuselage. The fit of all parts was so good that it was possible to assemble each half without glue, check that each half lined up with the other one, and then bond the joints.

Each half is then skinned using the balsa sheets provided. It was this element of the construction which proved to be the most time consuming, as the fuselage is shaped like a rugby ball and seemed to be one continuous compound curve when it had to be skinned. Due to the thickness of the sheeting it was difficult to conceal the former positions as these tended to project a bit 'starved-horse' style through the sheeting, and I had to add a few strips of balsa to overcome this problem at the front end of the fuselage. The fuselage halves are then joined and the tailplane added along with the remaining parts for the engine mountings etc. The entire structure was then laid aside ready for finishing, following the internal fuel proofing and fitting of a 6 oz SLEC tank.

The wings are built from die-cut balsa wing ribs and spars and go together extremely well, as again the parts fit together superbly. I did however find two problems during the construction period. The die-cut spars are longer than on the plan which results in the wing ribs not lining up to the plan and thus making the attachment of the leading and trailing edges difficult, as the only reference to the correct wing rib points is on the plan.

I sheeted the wings completely, although the plans show only part sheeting with cap strips on the exposed ribs.

I did not find the second problem until I tried to fit the wing to the fuselage, this being that the chord of the wing at the root is some 3/16 in greater than the space provided for it in the fuselage. This created quite a problem as the fuselage at this point could not be altered. I therefore had to make the wing fit by removing the necessary amount of wood and then resheeting the affected areas. The small metal wing bolts supplied were substituted for the more traditional nylon units.

The plan shows MK SS retracts, a set of which were obtained and installed. I noted that the wire legs looked a bit on the thin side for the job in hand and indeed when fitting the wheels they had to be sleeved as the wire was far too narrow. During a trial fitting of the retract system it was found that the servo fouled the fuselage formers if installed into the wing as shown on the plan. Installing the servo on its side overcame this problem.

Finishing: At this stage the airframe weighed 3-3/4 lb including cowl. The fuselage was given two light coats of K&B finishing resin. The wings and tail were covered in lightweight tissue, doped on. After the normal preparation the entire model was sprayed with car primer and left to harden for a few days. During this time the cockpit was completed..." 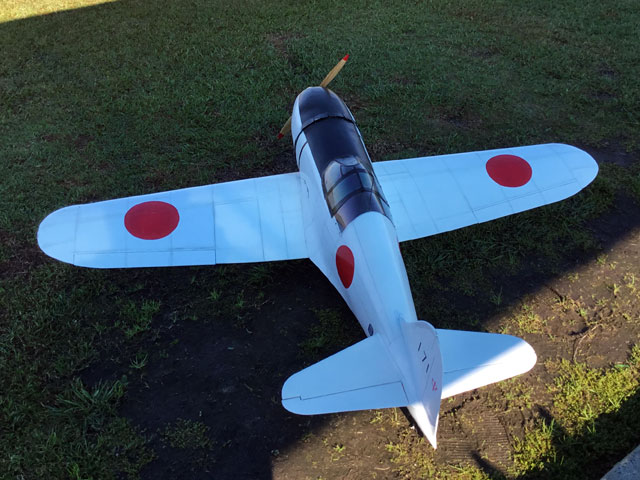