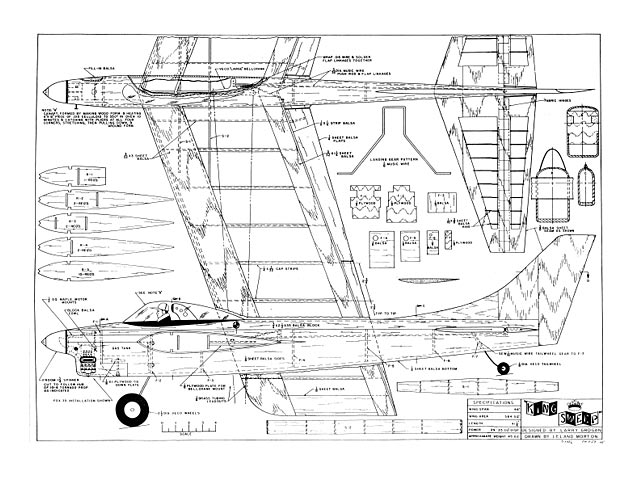 Quote: "We designed and built the King Sweep to satisfy our desire for a realistic stunt job - one that was strong enough to withstand the stress and strains of weekend fun flying, yet could be relied upon to turn in a championship performance. Our first King Sweep was finished in time for the 1958 Southwestern Model Airplane Championships. The King Sweep's smooth flying and efficiency, especially in square maneuvers, was good enough to win Second place with 595-1/2 points. With its jet-type design, the King Sweep resembles a B-52 and is fascinating to watch in flight. Powered by a Fox .35 engine, the King Sweep performs equally well at fast or slow speeds on 60 foot lines.

Here is how to build the King Sweep: First, study the plans carefully before beginning with the wing. Cut the ribs out of medium 1/16 balsa and slot them for the hardwood spars. The 2-piece trailing edge construction is of 3/32 balsa; pin one side in position on the plans and align and cement the ribs in position. Now, cement the top side of the trailing edge in place. Cement 3/32 leading edge sheeting to the back side of the leading edge spar, let dry thoroughly and then bend it over to the front leading edge spar. Slip the 1/8 hardwood spars in one half of the wing, line up straight, and cement.

Now, slip the other half of the wing on the hardwood spars and align wing perfectly straight. (It is important that you don't have any warps in the wing). Cement and keep checking for alignment while drying. Bevel the wing tip to fit in the trailing edge, as shown in plans, and cement. Cement the outside wing weight in place. Mount bell-crank onto 1/8 plywood, and fasten and wrap the leadout wires. Then cement the plywood in and thread the leadout wires through the ribs.

Sheet the bottom of the center section, then the leading edge at the tips. Be sure to cement tubing in the leading edge for the leadout wire. Bend 2 flap pushrods to shape out of 1/16 music wire. NOTE: Two are required because the sweptback wing design forces the use of double horns. Put the pushrod in the inside hole in the bellcrank. Bend the elevator pushrod from music wire and put it in the second hole of the bellcrank. Next, take 1/4 in balsa and cut out the wing flaps and sand them to airfoil shape. Mount the horns and then hinge them in position. After hooking the pushrods to the flaps, sheet the top of the center section.

Assembling the fuselage: Cut the sides out of 1/8 balsa and slip them over the wings. Cut all the formers out of 1/8 balsa and 1/8 plywood as shown on the plans. Cut out the place for the gas tank and landing gear in the leading edge sheeting as shown. Cut the 3/8 x 1/2 hardwood motor mounts to their correct lengths, and cement them to the body sides. Form the landing gear of 1/8 music wire and mount it to the No.2 former with J-bolts as shown. Cement formers No.1 and No.2 to the body sides and motor mounts and let dry. Then, pull the body together at the rear. Align the wing and cement it securely in place. After cementing formers 3, 4 and 5 in place, set the as-sembly aside to dry overnight.

Cut and shape the elevator and stabilizer out of 1/2 balsa and sand them to airfoil shape. Hinge the elevators and stabilizer together. Bend the pushrod to the correct length, and mount and cement the stabilizer to the fuselage and let dry. Mount the tail wheel as shown. Sheet the bottom of the fuselage with 1/4 in balsa. Next, drill motor holes in the mounts, install blind mounting nuts, then the 3/8 balsa block in the front. Spot cement 3/4 balsa to top of fuselage, cut and carve it to shape, then break it loose from the fuselage and hollow out. Securely cement it back in place.

Cut and shape the rudder and cement it in position. Either build or buy a gas tank, (about 5 ounces) and mount it. Mount the motor, with a 1-3/4 in spinner on it, and carve the body to shape. Carve out the balsa cowl shell and cement in the cowl mount. With your favorite filler, put in fillets between the flaps and elevators, then fill in all the bad spots. Sand the whole plane with a medium-rough sandpaper until everything is contoured. Finish with a finer grit until smooth. We applied 3 coats of clear dope on the entire framework before covering, sanding lightly between each coat.

The wings should be covered with a heavy grade of Silkspan, and the elevators and stabilizer with a finer grade - the nose section and cowling with silk and the rest of the plane with the finer grade of Silkspan. Mount the canopy over an interior of your choice and the King Sweep is ready for its paint job - and flying. We are sure you will enjoy this fine performer, King Sweep the blueblood of stunt." 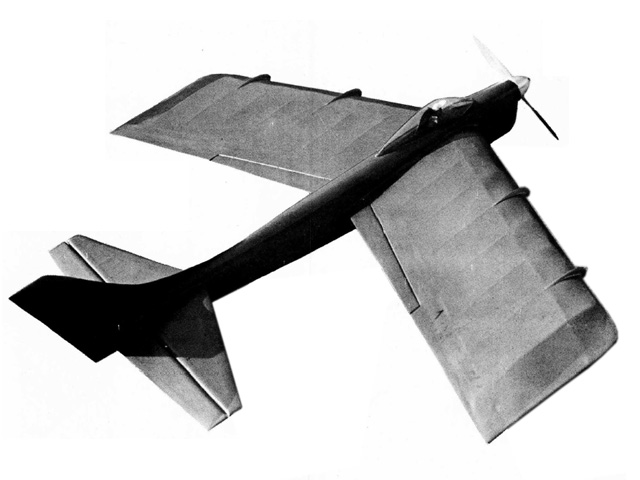