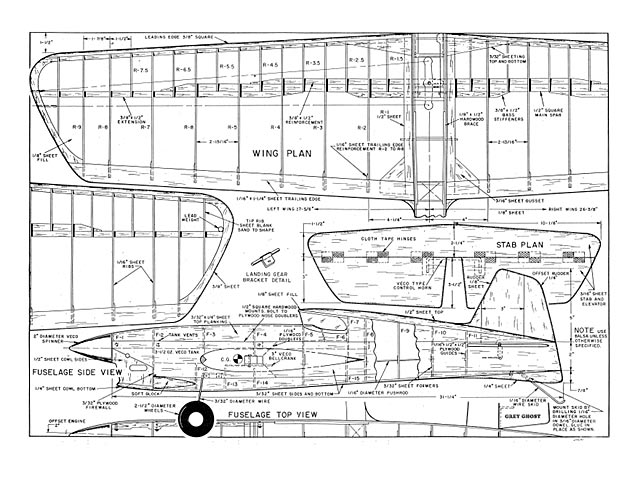 The 'Grey Ghost' is a full stunt model designed for the usual purpose, that being to give the builder a good looking stunt model that handled well and was still capable of winning contests. We don't claim the ship to be completely new and different in plan-form and theory, but instead it embodies only proven theories and ideas of stunt model design.

After getting half way through construction the somewhat big size of the model convinced us to use our hottest Johnson .35 for power. This we soon realized was somewhat of a miscalculation in the power department. With a good healthy home brewed fuel the ship hit an even 90 mph in level flight. It's an eye-opening sight to see a huge 54 inch span stunt model screaming around through maneuvers at speeds greater than many much smaller combat models.

Realizing this was a little fast for practical stunt competition and that the wings were bending perhaps to the point of being dangerous, we resorted to our original planning and installed a Johnson Stunt engine and a much milder fuel. This fuel consisted basic-ally of 27% Castor oil, 10% Nitro Pro-pane and the remainder Methanol. With this combination we were able to throttle our speed between 72-78 mph. This is the way we generally flew it. Streamlining sure pays off.

The model was designed with a lot of reserve turning capability. This was done to conform to AMA stunt rules which state altitudes that maneuvers are to be performed at. That is, loops and horizontal eights under 45°, Verticals under 90° -5', etc. This is a portion of the rules that many good stunt flyers apparently overlook. Reserve turning capability is certainly an advantage if you're in a tight spot. Hauling in on full up or down will cause the ship to turn on a dime.

Also, as most busy modelers, we tried to build a model that would so match our natural 'feel' for a model that a minimum of practice would be required before using it in a contest.

During the spring the original model was flown a fair amount and worked quite well, though it was not until Labor day that we were able to give the contest season serious thought. Because of our working hours, extensive flying practice was left to the day before the Perth Amboy meet. Quitting work early (6:00 pm) on this Saturday we rushed off to the flying field to get in a hopeful six flights or so.

On the first flight everything seemed to be working unusually well. Starting into the AMA pattern, the reverse wingover came quite low with nice smooth pull-outs. The loops and inverted flight were unusually good.

This feeling of satisfaction was unfortunately short-lived as the ship plowed in on the second outside loop. Now we really had a challenge on our hands. Should we give up like any sane person would and perhaps go to a movie, pizza house, etc? No, we decided to try to get it fixed up for the Perth Amboy contest the next day. At 5:00 am the next morning our sporting blood was tired but still working. Leaving early for the meet we stopped on the NJ Garden State Parkway to pick up another modeller laden with airplanes and obviously going to the meet. This is when one of our law enforcement officers courageously gave us a ticket for stopping on the Parkway. Gads, what else could go wrong. With one test flight at the meet we signed up for an official flight. It was quite windy and the two flyers before us crashed and wrecked two beautiful stunt models. (we consoled ourselves with the hopeful belief that our crash was over the night before.) The third man gave up his turn. We flew and things went favorably for us. The 'Grey Ghost' had won its first competition.

Being perfectly honest about things, winning a contest doesn't necessarily mean the ship or flyer is the best in the world. This goes for ourselves as well as any other stunt flyer. However, it does mean that this design is at least good enough to do a decent pattern and more important, to do well enough to win this event with almost a complete lack of the ever so im-portant practice in stunt flying this past season. This could be used to point up the degree of success achieved in trying to get a ship to match our natural 'feel' for flying a stunt model. If we can assume our 'feel' is somewhat near that of the average model-lers, we should have a design suitable to most stunt enthusiasts.

Every modeller who is seriously interested in stunt flying is perhaps striving to design the so-called 'perfect' stunt model. That is perhaps true in our case too. Although in general each succeeding design is improved over the past, so is our ability to pick out minor shortcomings. The perfect stunt model will never be built. The second model of this series will be slightly longer and if we get around to a third, it will be again lengthened and flaps will be added.

Construction of the model is similar to many of our earlier models in that the fuselage and wing are built as a unit and not individually. This may be revised if you so desire. The mainspar looks somewhat clumsy, but it does its job. Choose materials carefully using light materials where possible. The original weighed in at 34 oz, on completion.

Begin construction by fastening the motor mounts to the plywood nose doublers and then to the balsa sides. Join the two sides by installing the firewall, F8 and cementing at the tail end. The basic portion of the wing spar may now be cemented in place..." 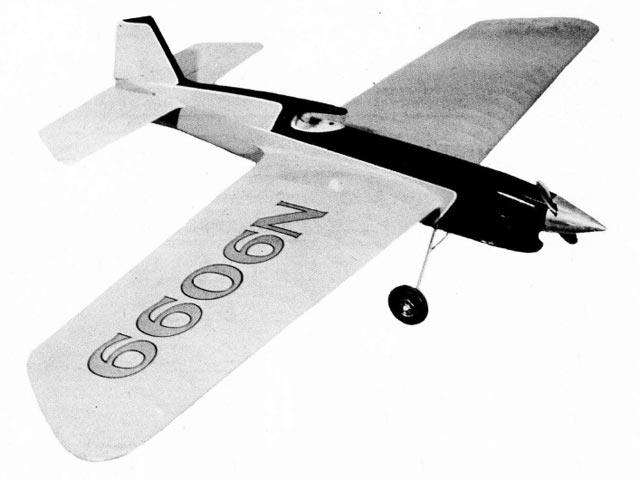