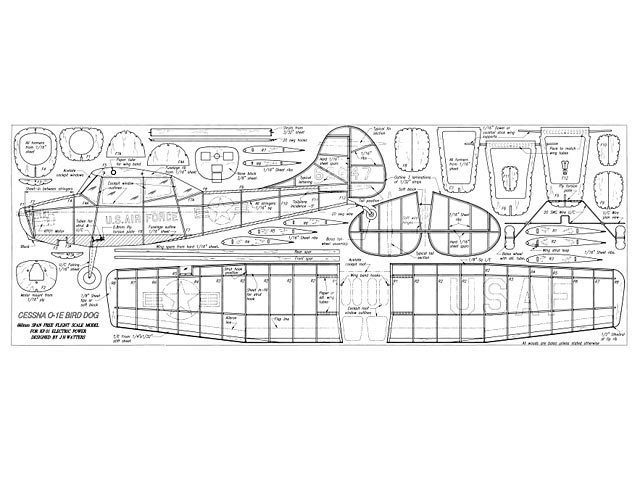 The Eric Fearnley Cessna Bird Dog (oz8452) was the first scale model I built from the Aeromodeller plans range. To give you some idea of how long ago that was, the Plans Handbook cost, one old shilling (12.5 new pence). I wish I still had that book now. Needless to say as a youngster, the model was built too heavy. Covered if I remember correctly in 'nylon', and coloured with green dope. Powered by a Frog 80 diesel, it did actually fly. A testament to Eric Fearnley' s design.

Having attended some indoor events last season and flying my Interstate Cadet, it was finally retired, when trying as you do, to catch the model before it hits a wall. It sustained serious 'finger' damage. This meant that a new model would be required and the Bird Dog sprang to mind. Having had quite a bit of success recently with electric models, I decided that the Bird Dog should be electric powered. I have tried to maintain as true a scale model as possible, including tail and wing sections. The final result has, I think, been quite satisfactory.

Fuselage: There are no complicated parts to this model and I don't think anyone should find any problems. How you build up any model is always a matter of personal choice. I usually produce a kit of parts, this way you can build-up one area whilst another is setting.

As this model uses thin fuselage formers and stringers, there are a couple of options as to how you can actually build-up the body. Either cut out the formers as shown using the slots in the formers, or cut the former outline a stringer depth smaller all round. This way you will glue the stringers onto the outside of the formers without slots.

OK, so we have all the parts. Pin down the shaded area parts over the plan, these form the basic fuselage outline. Don't forget to cut out the slot for the undercarriage torsion plate. Now glue formers F1 and F3 along with formers F8 to F12 in place, making sure that they are vertical. For the majority of this model I used PVA glue. Cyano was only used where I require a quick drying joint. The 1/16 sq stringers shown on the plan should now be attached to the formers. Make sure that all the formers are still vertical. Also mark onto the outline the position of formers F5, F6 and F7.

Remove the structure from your board and add the opposite side formers and stringer, making sure again that everything is true. The ply motor plate F2 should now be positioned. Check its placing against your particular motor assembly. For anyone wishing to use a CO2 motor, a different plate will be needed. Notice that this plate has no stringer slots. All the stringers lie on the edge of the plate.

Now you can slot into position the remaining cabin formers and add in some more stringers. When adding the stringers, do this on alternate sides in turn. Adding them all to one side first can lead to a bent fuselage. Before positioning all the bottom stringers add the undercarriage wire and torsion plate. You can then build-up the remaining parts of the body by your preferred method.

With all the stringers and cabin wing root ribs built-up, you should have the classic Bird Dog shape. For strength, handling and to obtain a good contour I sheeted-in between formers F1 to F4 with soft 1/16 sheet. Also around the U/C area between F5 and F6. This makes the model easier to handle, especially when launching. Otherwise, unless you are very careful, you can end up with cracked stringers.

I obtained my KP01 motor and batteries as separate items so to keep the model's weight down I use the batteries as ballast. This requires that a provision for positioning the batteries within the body is incorporated as I didn't want them dancing around..." 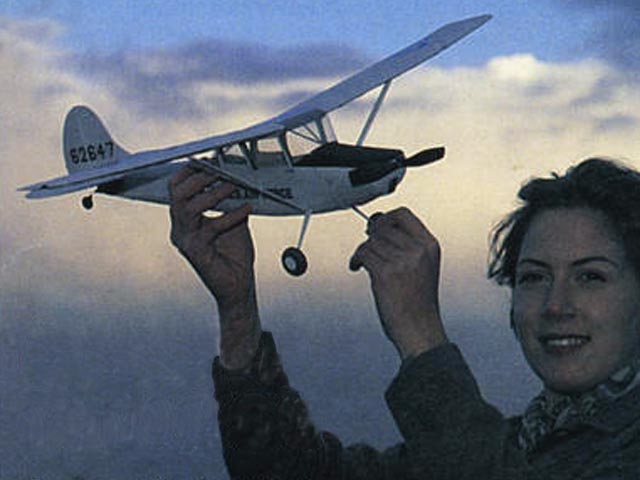