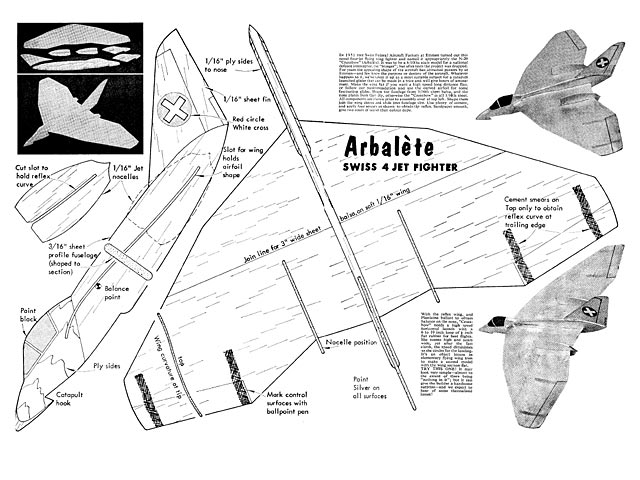 Quote: "IN 1951 THE Swiss Federal Aircraft Factory at Emmen turned out this novel four-jet flying wing fighter and named it appropriately the N-20 'Crossbow' (Arbalete). It was to be a 6/10 scale model for a national defence interceptor, the [EFW N-20 Aiguillon] 'Stinger'; but after tests the project was dropped.

For years the appealing shape of the aircraft has attracted passers by at Emmen - and few knew the purpose or destiny of the aircraft. Whatever happens to it, we've taken it up as a most suitable subject for a catapult launched glider that can be made in a trice and will give hours of amusement.

Make the wing flat if you want a high speed long distance flier, or follow our recommendation and use the curved airfoil for some fascinating glides. Shape the fuselage from 3/16 sheet balsa, and the nose plates from thin ply, otherwise the 'Crossbow' is all 1/16 sheet. All components are shown prior to assembly over at top left. Shape them join the wing sheets and slide into fuselage slot. Use plenty of cement, and apply four smears as shown to obtain tip reflex. Sandpaper smooth, give two coats of sealer then colour dope.

With the reflex wing, and Plasticine ballast to obtain balance on the nose, 'Crossbow' needs a high speed horizontal launch with a 6 to 10 inch loop of 1 inch flat rubber for best flights. She zooms high and soars wide, yet after the fast climb, the speed diminishes as she circles for the landing. It's an object lesson in elementary flying wing trim to make a second model with the wing section flat.

Try this one! It may look very simple - almost to the extent of there being 'nothing in it'; but it can give the builder a handsome surprise - and we expect to hear of some thermalised losses!" 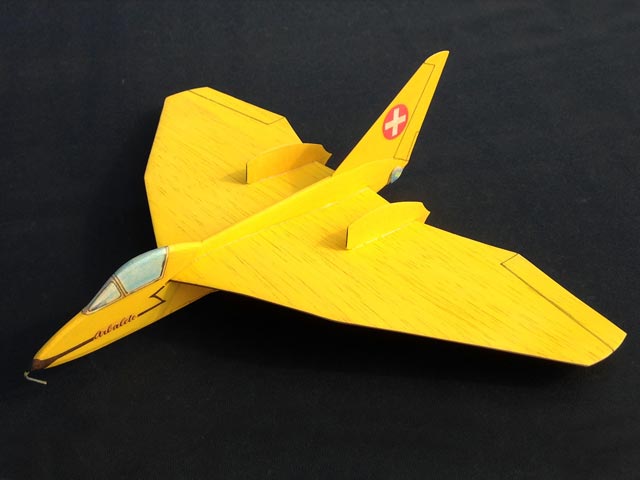 This is my all-time favourite chuck glider. When I first made it, I couldn't afford to buy 1/16 and 3/16 sheet so I adapted the design by laminating the fuselage from 3 sheets of 1/16, and the fin was part of the central sheet. The central sheet has the grain running vertical. A very strong plane, as we often played in the street and it landed on the tarmac!
Bob - 24/06/2014
Added the missing link to Algy's raw scan post, thanks to Gregg.
SteveWMD - 23/11/2018
This flies splendidly with a pusher capacitor powered motor/propeller. See: https://jetex.org/index.php/jetex-forum?view=topic&catid=5&id=366
Roger Simmonds - 13/09/2021
Here's some pictures of the Arbalete catapult glider, from the 1963 Aeromodeller plan oz3416 [main pic, 004-007]. Built over Christmas break 2021, it's a fine flyer. Build and fly video at: https://www.youtube.com/watch?v=5X6i8XLgeQ0 Thanks again for keeping all these great plans available!
Mike Kelly - 10/01/2022
Add a comment