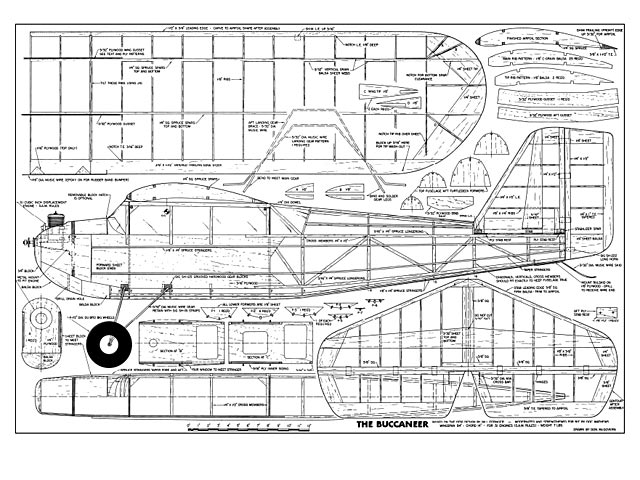 Buccaneer. 3 channel radio control model. Despite being unhelpfully titled: 'The Original Buccaneer' (see below) this is a modified, later version of the (actual) original Buccaneer (oz5796) design. Wingspan is 84in, chord 14in, for .51 engines (SAM rules). Drawn by Don McGovern.

Quote: "This is a structurally simplified and strengthened Original Buccaneer. It employs contemporary materials an adhesives to develop a vastly stronger and more easily built modern version of this classic design. Modifications to the wing include a much heavier leading edge, repositioned spruce spars with shear webs, a full depth trailing edge from store-bought stock, and tips that are much easier to construct as well as being vastly stronger.

Fuselage changes include spruce longerons, solid cabin area sides to anchor the window framework, ply-wood bulkheads for alignment and strength, a strengthened rear end, and modernized landing gear attachments, as well as several other more subtle changes. The tail surfaces have been hinged, of course, as well as strengthened with sheet 'airfoiler' strips. These changes were deemed necessary to correct a notoriously weak stabilizer and rudder. Please be assured that no outline or cross-sectional changes have been made that would violate the SAM rules. This is truly a "beef up the built-ups" as described in the rule book.

Under no circumstance should this "Original Buccaneer" be confused with the later long-running Berkeley kit of the "Super Buccaneer." Rather, this is the very first design to carry Bill Effinger's name on the drawings; it is one of the earliest gas-powered kits in the US. Plans were offered only in half-size, with full-sized ribs and bulkheads; the earliest ad I can locate is in Model Airplane News, March 1936! Forty-four years ago! The Original Buccaneer was also shown in three-view forms in the 1937 Zaic Yearbook, along with such other history makers as "Quaker," "Miss America," "Tlush '36 Texaco Winner," and Frank Ehling's "Stick."

A kit for the Buccaneer was later introduced, containing strip and sheet wood, some straight lengths of wire, and a roll of bamboo paper wrapped around the plans. As sales picked up, Effinger introduced one of the first "package deals": deluxe improved kit, M&M airwheels, and a Brown Jr. All for $29.00 - certainly a bargain even in 1936.

The Buccaneer established an NAA (the AMA was born several years later) record of 63 minutes in October 1936. Flown by Don Spaulding of Denver, the Buccaneer was actually followed in a car for four hours and 45 minutes before disappearing vertically (the de-thermalizer was not introduced until several years later). Buccaneers took three places in Texaco at the '36 Nats, and one flew 20 minutes on the new fuel allotments in 1937.

The Buccaneer design was cleaned up and several structural weaknesses corrected to become the Super Buccaneer, first advertised in the May 1937 MAN. This kit was to become the flag-ship of the Berkeley Iine for the next 20 years, with kits in production until the demise of the company. At one time, the Super Buccaneer could be purchased ready-built and test-flown for $125.00. Based on the considerable success of the design, Bill Effinger's crew developed numerous variations on the theme the five-foot 'Standard' of November, 1937, then the "48", "36," "B Special," and the "C Special." This enlarging, shrinking, altering and modifying became a Berkeley Models trademark throughout its history.

My own lifelong love affair with Buccaneers started when I was a wide-eyed 12-year-old boy with a "Modelers Dream Book" from Berkeley Models in Brooklyn. Purchased for a dime mailed with a three-cent stamp, the catalog had been thumbed through so many times that the print was fading, and the pages were held together with that newfangled Scotch tape. The great big "Buc" was what every kid would have bought in 1943 except for its $9.95 price tag..."

Article pages, text and pics, from a scan by RFJ. 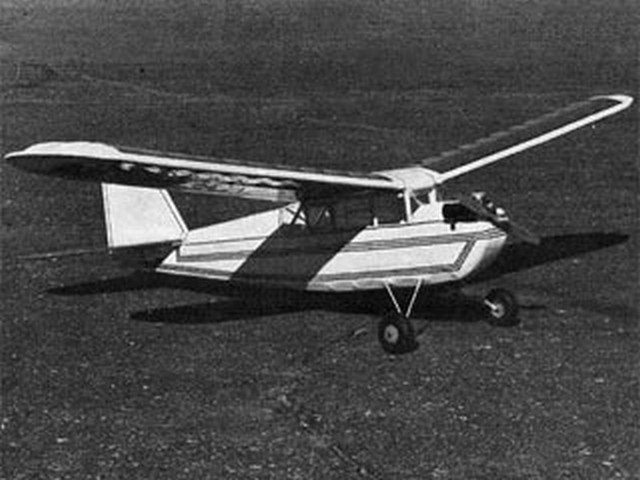